American scientists are the world’s energy pioneers. For the past century, their research has positioned us to lead on virtually every energy technology, from solar panels to clean coal. We can cement this legacy with commonsense reforms that enable and inspire American ingenuity.

A Vision For Clean Energy Dominance
Our Take
Learn More

Empower the heads of the national laboratories
Individual national labs should be given the authority to independently engage in select private-sector partnership agreements. Currently, this authority is reserved by the Department of Energy officials. Reducing unnecessary overhead would decrease approval times and barriers to commercialization.

Facilitate private sector access to national laboratory resources
Opening our national lab resources to companies and inventors could significantly lower commercialization barriers. The labs already have secure facilities, high-tech equipment, and thousands of expert scientists. The heads of the national labs should be given more discretion to rent their resources to the private sector.

Implement the blue ribbon commission recommendations
Over 50 reports have proposed solutions to the deeply strained relationship between the national laboratories and the Department of Energy.1 One of the most recent, a 2014 report by a blue ribbon panel commissioned by Congress, made over 30 targeted recommendations that should be implemented.

Our national laboratory system is one of America’s crown jewels. Run out of the Department of Energy, it boasts thousands of our nation’s brightest scientists, including 113 Nobel Laureates. Formed out of the Manhattan Project, the national laboratories are now tasked with translating basic scientific research to real life applications. The labs serve as a coalescing point, with over 30,000 academic and industrial scientists using major lab equipment each year.2 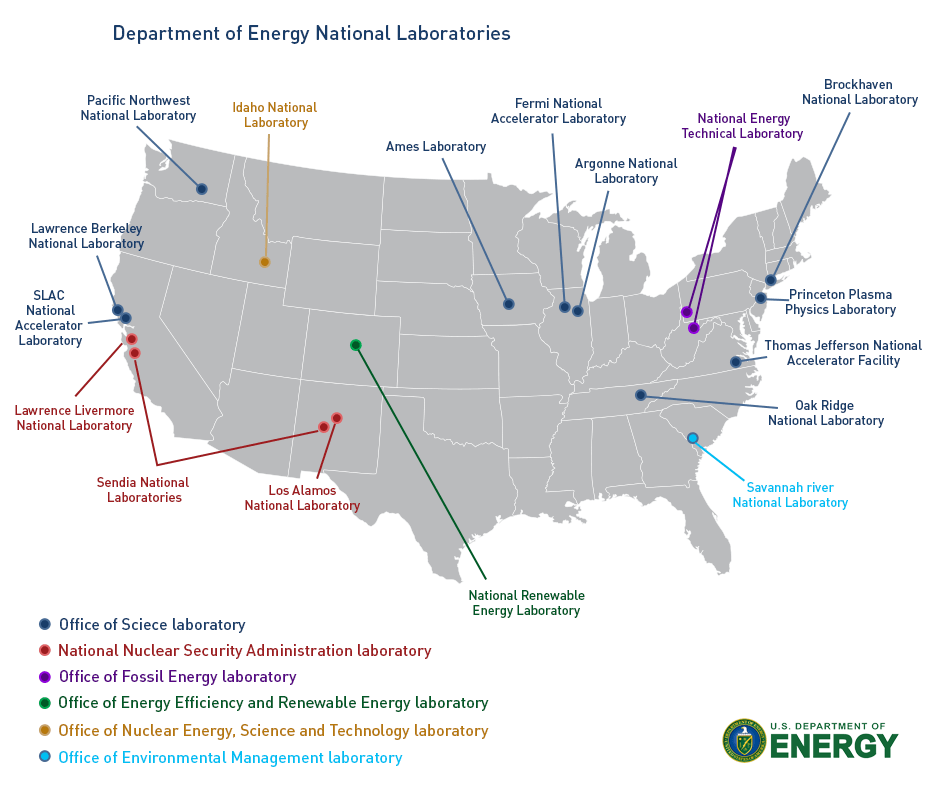 Caption: The national labs employ over 55,000 Americans at 17 different locations across the country
Source: Wikicommons3

Since their rise to national prominence during World War II, virtually all the national labs have been government owned and privately run.4 The combination is a potent formula. Armed with the robust resources of a government agency and the agility of a private company, the national labs historically enjoyed volumes of success. For example, lab scientists discovered 17 new elements on the periodic table5, contributed in mapping the human genome, and laid the foundation for fracking technologies.6 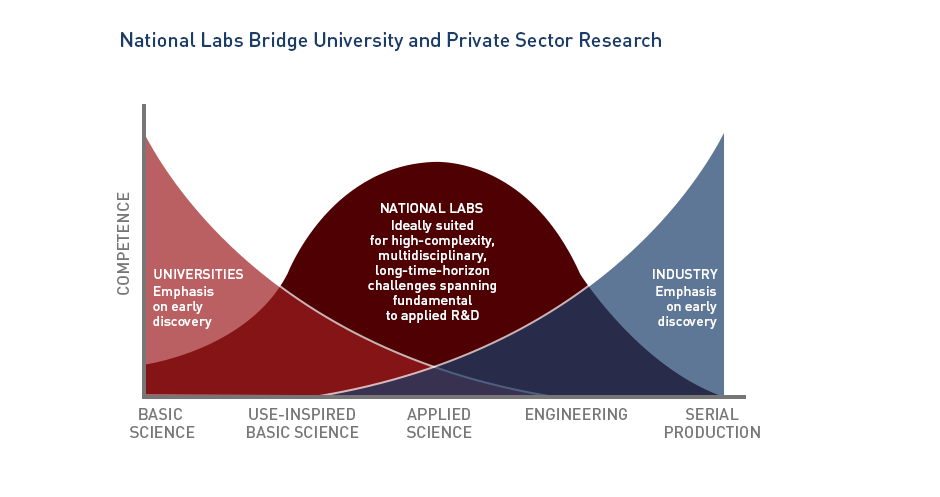 Unfortunately, privately run means little today. The Energy Department, responding to poor performance of a few contractors, has adopted a heavy-handed management approach. National lab management, contractors themselves, are now constrained by a mountain of government rules. The “privately run” labs even take cues from the Energy Department down to the project level.7

Certainly, the Energy Department has a responsibility to hold its contractors up to high standards when dealing with nuclear and other high-risk research. The Department of Energy, however, micromanages low-risk activities as well, from human resource modules to small partnership agreements. Unnecessary layers of bureaucracy increase costs, waste time, and increase laboratory overhead. For example, some partnership contracts between national laboratories and industries take 3 to 6 months to iron out. These delays make our companies less competitive in today’s global economy.

Boost basic scientific research
Companies have little incentive to make large investments in basic research because of high risks and unclear benefits. Often, decades are needed before the fruits of research are realized. Public investments are needed to support the American legacy of innovation — and yet, we’re falling behind China, South Korea, and many other countries. China spends more than twice as much as the United States on government energy research as a percentage of GDP.

Expand private-public partnerships
Tax credits are not the only way the government can support the private sector: national lab equipment, expertise and research can be better shared; local academics and companies can work together in cost-shared “innovation hubs”; or the government can experiment with completely new programs like the one modeled after the Department of Defense’s successful research program called DARPA.

America only dedicates 2% of its R&D budget to energy.8 According to chief executives from GE and others, this is only a fraction of what’s needed. Failing to invest in next-generation energy technologies risks America’s long-term competitiveness in the global economy because China, South Korea and others are prioritizing energy R&D ahead of the United States.9 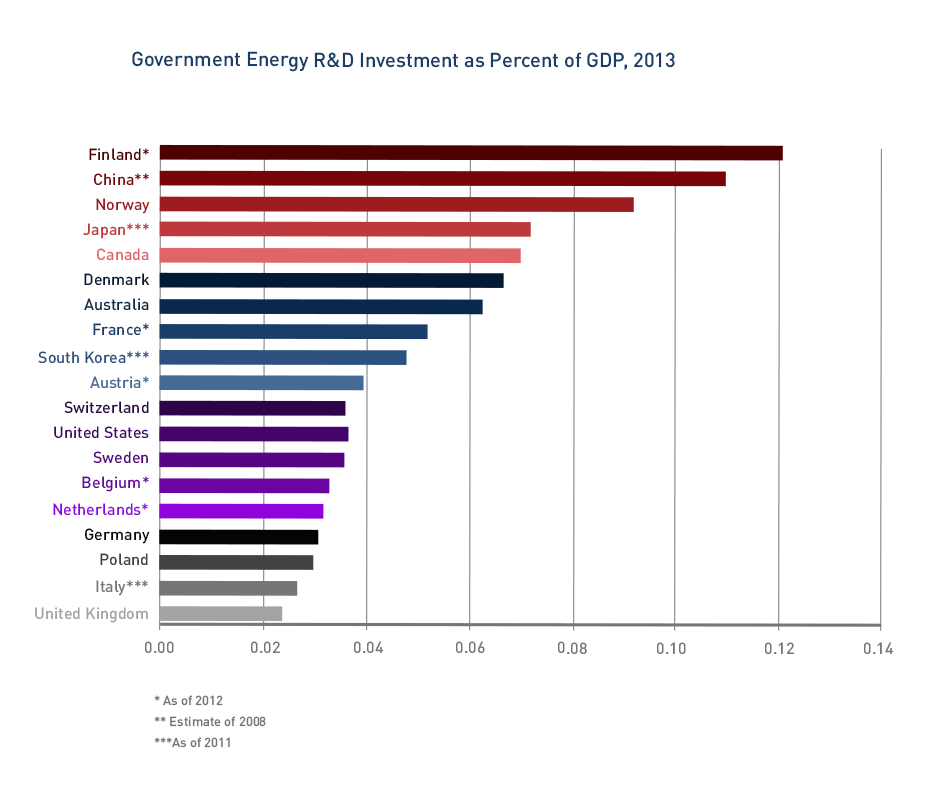 Our brightest companies and business leaders are working hard to fill the void. Bill Gates is personally investing $1 billion to make energy cleaner and more affordable.11 GE is putting $15 billion into its future energy division.12 Wells Fargo13, Citi14, and Bank of America8 have each pledged multiple times more.15However, the private sector is ill-equipped to take large risks on basic science research.

The government should pick up the slack where the private sector doesn’t operate, as it does in building bridges and roads. One lesser known public responsibility is incremental and basic scientific research. Only 5 percent of private-sector R&D funds are devoted to basic research.16

Basic research provides a foundation for American industry to innovative around. Like national defense and our highways, scientific research is a public good. The government should invest in public goods because we all benefit from that single investment.The private-sector alone tends to under-invest in innovation.

Industry commercialization efforts are complemented by sustained, government investments in basic research. On the other hand, some government programs can crowd out private sector funding. These programs, such as the $7.5 billion Advanced Vehicle Manufacturing Program, should be phased out in favor of a larger commitment to the basic sciences.17,18

You don’t need to look far back in history to see how the private sector and government can work together. Fracking, the drilling technique behind the recent U.S. oil and gas windfall, relied heavily on government research to reach commercialization.19

Many private sector options exist to jumpstart American research. Leaders from some of America’s largest businesses, from Lockheed Martin to General Electric, are calling for a doubling of our federal R&D budget.22

New initiatives, such as the Energy Department’s Innovation Hubs, are showing early promise. They bring the government, academics and industry together to develop technologies that reduce carbon pollution and our dependence on foreign energy. After being seeded with federal money, the progress and funding of each hub are systematically reevaluated every five years.23 Recent hubs are focused on themes ranging from energy storage and nuclear reactor design to artificial photosynthesis.24

The Advanced Research Projects Agency – Energy (ARPA-E) is another energy research initiative modeled after DARPA, the successful Department of Defense R&D program. It applies venture capital management techniques to potentially transformational technologies deemed too high-risk for industry-driven development. More than 45 of its projects have secured over $1.25 billion in additional private sector funding.25 Initial ARPA-e investments helped the technologies scale to the point where they attracted private capital.

Basic Research and the Innovation Frontier