Carbon capture can significantly reduce carbon emissions from industrial activities, similar to how other technologies have reduced acid rain and smog pollution. The first carbon capture project began over 50 years ago in the United States for enhanced oil recovery, a process that uses carbon dioxide for oil production. Today, about two dozen large carbon capture projects exist around the world.1 The technology is supported by a diverse coalition of environmental organizations to industry heavyweights2 to make carbon capture more affordable and scalable.

Implement the Energy Act of 2020
Congress made sweeping, bipartisan updates to the Department of Energy’s clean energy research and development programs at the end of 2020. Among them were new and ambitious carbon capture and removal R&D programs. Fully implementing these programs would result in several new carbon capture projects across power plants and heavy industry.

Carbon capture is a critical technology that can reduce emissions from power plants, industrial facilities (e.g. cement and steel), and even straight from the atmosphere. Further development will drive new concepts and technologies, such as the zero-emission fossil energy NET Power Plant. Carbon removal straight from the atmosphere, or Direct Air Capture (DAC), is a technology that has garnered significant support over the last two years and especially through the Energy Act of 2020 which supports commercialization efforts. This will aid companies, such as Carbon Engineering, to deploy the world’s largest mechanical carbon removal facility in the US.

Countries around the world are working to commercialize carbon capture technologies. The U.S. Department of Energy (DOE) is a widely recognized leader, scaling carbon capture technologies across more than two decades. The most prominent test facility in the United States is a public-private partnership between the DOE and companies including Southern Company and ExxonMobil.3

Large scale carbon capture facilities in operation and planned (through 2024) 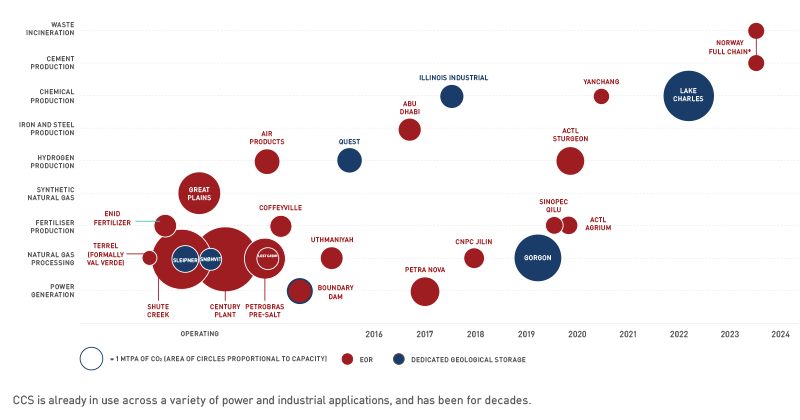 Historically, basic government research has reaped dividends for our economy. In the case of natural gas, taxpayers are still benefiting from government R&D into hydraulic fracturing technologies to the tune of billions of dollars each year. Government-supported research developed the basic mining bits, 3D imaging and liquids that were instrumental in the commercialization of hydraulic fracturing technologies.

Many carbon capture technologies in the development pipeline have been successful at the small bench scale and have yet to scale up. Demonstrating at larger scales is difficult for the private sector to overcome because it often requires tens or even hundreds of millions of dollars. Private-public cost shares are needed to expeditiously prove first-of-a-kind technologies to facilitate commercial guarantees and increase investment community confidence.

Microsoft will be carbon negative by 2030

2. Develop clearer rules and regulations
Federal agencies have not developed robust processes for carbon capture and sequestration projects to store carbon dioxide on federal lands or in waters. Guidance should be developed to enable utilization of these areas.

Carbon dioxide can be safely stored underground in certain types of geology, such as the basalt formation shown above.
Source: Department of Energy5

Congress can also expedite carbon dioxide pipeline construction. As demonstrated by the Keystone and Dakota XL delays, constructing pipelines can take longer than anticipated. Although industry may be willing to pay for new pipelines, federal reviews can stymie development. To reduce bureaucratic delays, the pipeline corridors can be established at the state or federal level. In 2015, Wyoming launched an initiative to pre-permit certain areas with the federal government to reduce the regulatory burden on prospective developers.

1. Expand the payout term
Carbon capture projects often have no other revenue stream beyond the 45Q tax credits they generate. Expanding the credit’s payout term from their current 12 years to their engineered life (20 years), would more accurately compensate projects based on their performance.

2. Reduce the project size threshold
The carbon capture credit is only available for very large projects. The minimum project size should be reduced to enable more facilities and facility types to leverage the credit.

3. Provide long-term certainty
Projects must currently commence construction by the end of 2025 to qualify for the credit. Extending this deadline would provide developers longer-term certainty, since carbon capture projects often take several years to pre-permit and develop.

More than two dozen carbon capture projects are under various stages of development across the United States, and Congress deserves a lot of credit. The bipartisan, federal carbon capture tax credit (“45Q”) has been heralded by international clean energy authorities as the leading reason the U.S. is the most attractive region in the world for carbon capture investments. The credit only pays out for performance, based on every ton of carbon dioxide sequestered. This structure provides long-term certainty to project developers while maximizing value to taxpayers.

Despite its early success in motivating new projects, the credit can be improved to allow more projects to monetize the credit and better align it with project lifetimes. These credit enhancements have been supported by various groups, from the National Petroleum Council to leading environmental organizations such as the Nature Conservancy.

Extending the carbon capture credit could increase commercial deployment by several-fold and expand the benefits of carbon capture to more types of sources, according to analyses from the Rhodium Group. In the power sector alone, 45Q could motivate about 170 new natural gas carbon capture facilities by mid-century with long-term extension of the credit.

US Budget Bill May Help Carbon Capture Get Back on Track

Interactive Map of CCUS Projects in Development in the U.S.