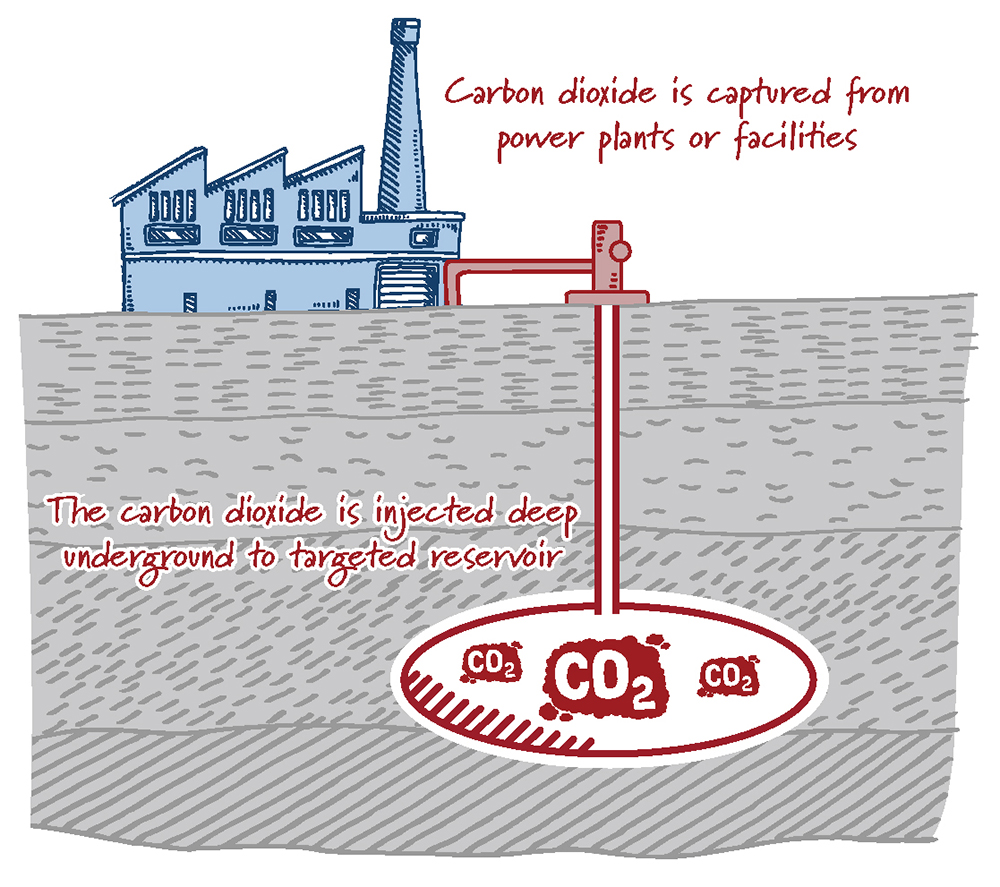 In order to get carbon dioxide (CO2) back into the ground after being captured, the U.S. needs all parts of the carbon management supply chain to work together. The passage of the bipartisan Infrastructure Investment and Jobs Act (IIJA) infused nearly $12 billion into carbon reduction and removal programs, $2.1 billion of which is authorized for the build-out of pipelines to move the CO2 from where it’s captured to where it’s stored. The federal government is moving in the right direction, but additional regulatory certainty on where and how we store the CO2 remains a key issue. We know sequestering captured CO2 into underground rock formations works and is safe, yet updated policies will help ensure long term success.

Carbon capture, utilization, and storage (CCUS) refers to a suite of technologies that selectively capture CO2. CCUS is widely recognized as a critical technology because it can significantly reduce emissions from new and existing fossil power plants, mitigate industrial emissions (e.g. cement, steel, and ethanol), and achieve negative emissions under certain applications. This significant first step in the carbon supply chain has been supported by funding from the Department of Energy’s Fossil Energy And Carbon Management office and will undoubtedly benefit from the $2.537B for carbon capture demonstration projects and $937M for carbon capture large-scale pilot projects appropriated in IIJA.

Once captured, the CO2 then needs to be transported–usually by pipeline– to where it will be either utilized or permanently and safely stored. Over 5,000 miles of carbon dioxide pipelines have been built across the United States. In order for CO2 capture projects to reduce emissions at the scale necessary to make an impact on rising global emissions, the number of pipelines will need to increase dramatically. Congress recognized this need in 2021 when it authorized the $2.1 billion Carbon Dioxide Transportation Infrastructure Finance and Innovation Program in the bipartisan IIJA for loans and grants to build out domestic common carrier CO2 pipelines.

How do we know the CO2 is staying put?

There are several techniques for utilizing or sequestering captured carbon. The Underground Injection Control Program was created by EPA to regulate injection wells for sequestered CO2. Unlike common residential water wells that pull up water, this program regulates injection wells that push down various substances. Within the program, there are six “classes” of injection wells. The newest class of wells, referred to as Class VI, was developed in 2010 for the injection of carbon dioxide into the porous space between the mineral grains of deep rock formations for long-term geologic sequestration. This is often described as the “pore space.”

Injecting gas into a reservoir or the pore space is not a new concept. For approximately 40 years, companies have been injecting CO2 in an effort to boost energy production. In order to begin safely injecting gasses, a detailed site characterization or reservoir study is done to confirm that the right characteristics are present to ensure safe and secure storage in the rock. Programs like the Department of Energy’s CarbonSAFE initiative provide funding to identify commercial-scale sites that are suitable for carbon storage.

Once a site is determined to have good storage capacity, and a project secures the correct federal permits, an injection well can be drilled. Per federal regulations, there are monitoring, reporting, and verification requirements that must be conducted for carbon storage projects during the injection and post-injection periods to ensure the carbon is being stored safely and stays in the ground long-term.

Not all reservoirs are created equal. In order for CO2 to be permanently stored, these three key elements must be present: 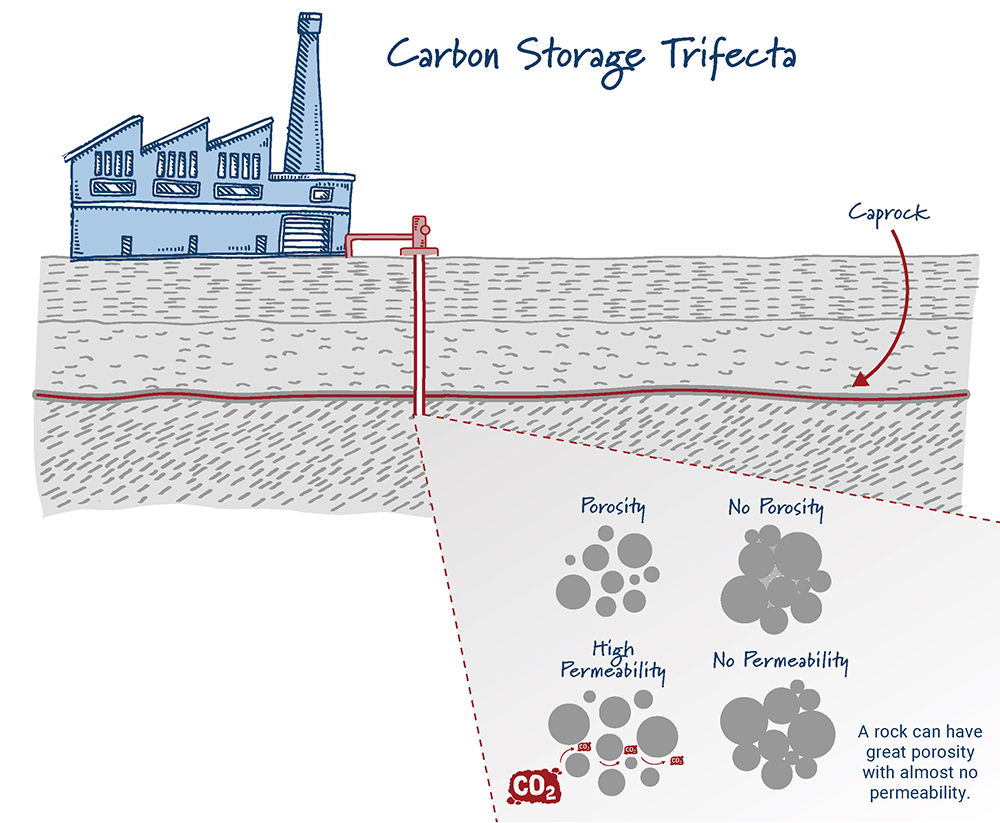 Who owns the pore space?

One of the main regulatory challenges with carbon storage is access to federal pore space.

There is no shortage of CO2 storage capacity within the U.S. In fact, the U.S. Geological Survey has estimated a storage potential of 3,000 metric gigatons of CO2, which is 600 years’ worth of the U.S.’ annual emissions! Granting access to this pore space would make the entire CCUS process much easier, as carbon storage developers would only need to work with one landowner: the federal government.

The U.S. has the capacity 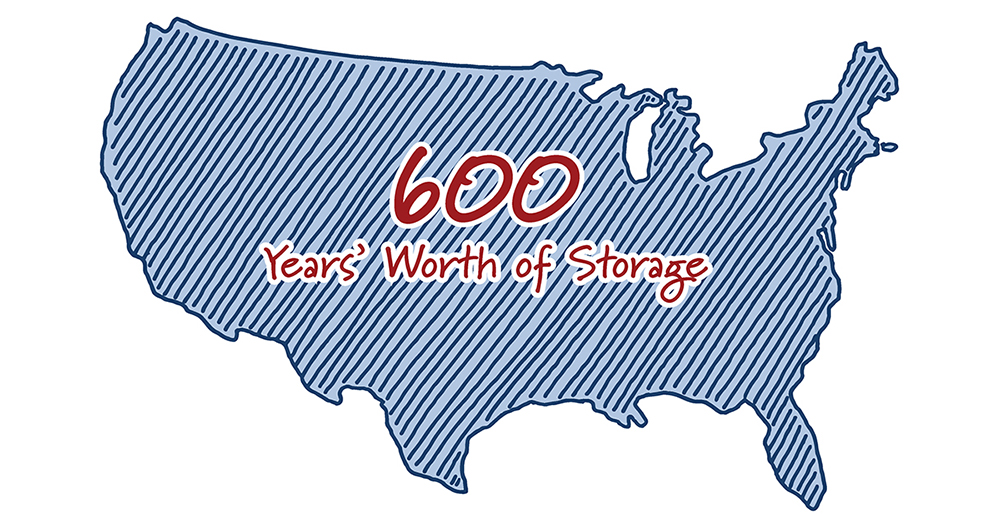 A project developer must have approval and access to pore space before they can begin injecting CO2. Currently, pore space ownership in the U.S. consists of a myriad of state laws that vary around the country, with many states being unable to determine ownership. Most jurisdictions typically view that the surface rights owner also owns the subsurface pore space.

Congress took the first steps in clarifying federal pore space ownership for offshore CCUS through the passage of the bipartisan Infrastructure Investment and Jobs Act (IIJA), which clarified that the Department of Interior could issue leases for all sources of carbon capture offshore. Additionally, in a June 8th announcement, The Bureau of Land Management asserted its authority to issue right of way authorizations to store CO2 in federal pore space. Both onshore and offshore CO2 storage require additional clarity before federal pore space is ready to use.

Expanding access to federal lands for carbon storage projects could unlock a wealth of potential to get the U.S. on track to meet its emissions reduction goals. Clarifying ownership of federal pore space brings the U.S. one step closer to having a complete CCUS regulatory framework, which will provide the private sector with much-needed regulatory certainty for these projects to be successful.