In 2017, hydropower created more than 4 times clean electricity than solar. It consistently ranks as one of the cheapest and cleanest forms of energy.

According to the Department of Energy, America holds the technical potential to double the size of its hydropower fleet. More hydropower can be generated from small, environmentally-friendly projects and upgrades to existing dams. Yet, our hydropower potential is being held back by a cumbersome regulatory process and an uneven playing field.

Many hold outdated views on hydropower. Decades ago, hydropower meant large dams. Large dams meant taming rivers – and taming rivers was frowned upon because of their impacts on fish and other wildlife. Modern technology and responsible development can alleviate these concerns.

Today, lots of new hydropower can be developed without building another dam. Over 80,000 dams are already built in the United States, yet only 3% are outfitted with equipment to generate power. These “non-powered dams” were built for other purposes, such as irrigation and flood control. Oak Ridge National Laboratory estimates electrifying these existing dams would boost America’s hydropower capacity by 15%, enough to power millions of United States homes.1

West Virginia’s Tygart Dam, currently only used for flood control and irrigation,
is estimated to have 47 MW of power generation capacity.
Source: Wikimedia2

The US Army Corps of Engineers (USACE) owns a quarter of all American hydropower capacity, making it the largest owner of hydropower in America.3 Plants owned by USACE make as much electricity as the entire state of Nevada.4 But the fleet is aging. Large portions of the fleet were built over 50 years ago and many still use the same parts installed over three decades ago.5

As upgrades have been deferred, the plants are breaking down more frequently. The fleet undergoes “unplanned outages” at twice the acceptable industry standard.6 According to a USACE analysis, neglecting to modernize 54 of its plants would forego $7 billion in electricity sales over the next 20 years.7 New equipment would simultaneously maximize flows to federal coffers and bolster U.S. clean energy generation.

Despite generating billions each year for the United States taxpayer, only a fraction is reinvested into the fleet by the federal government. Compared to the private sector, the government spent three times less on refurbishments, replacements, and upgrades from 2005 to 2014.8

The bureaucratic and cumbersome federal funding process is a large part of the problem. USACE relies on Congressionally appropriated funds for non-routine maintenance, a process which can take over a decade.

USACE does not sell power directly to the public. The responsibility of selling power falls to intermediate federal organizations called Power Marketing Administrations (PMAs). These PMAs — such as the Western Area Power Administration and Southeastern Power Administration — are required by law to sell the power “at the lowest possible rates”.9 One federal report found one PMA industrial rate was 44% lower than the regional average in 2014. It even found these rates are often lower than the costs needed to maintain the plants.10

A law passed 15 years ago, the Water Resources Development Act of 2000, allows PMA customers to pay for upgrade projects upfront. Each PMA can finance improvements by levying a fee on its customers that already benefit from their below-market electricity rates. Despite the law, USACE reliability is still steadily declining. Research should be conducted on how Sec. 212 can be better leveraged or reformed to modernize the USACE fleet. Allowing PMAs to charge market rates would also open up new funding without affecting U.S. Treasury funds or the federal debt. This fix, however, may require legislative changes because PMAs are locked into long-term rates with local cooperatives, utilities, and industry.

A systematic process to quickly identify, analyze, and fund modernization projects has emerged in other agencies. The Tennessee Valley Authority and Bureau of Reclamation operate hydropower plants with much more reliable equipment because they do not rely on Congress for funding.11 Instead, they are allowed to use their electricity sales to finance their upgrades and maintenance.12

Private financing has also been proposed as a solution: there is “tremendous amount of interest to provide private capital improvements of USACE hydropower facilities”.13 USACE, however, lacks authority to engage in private-sector deals. Complete privatization of the Army Corps fleet is unlikely because the plants and reservoirs serve many non-power needs, such as flood control and water supply, which serve the public interest.

High permitting costs are a predictable result. In the case of one California plant, relicensing one plant can cost over $50 million dollars and take over 17 years.15In the case of a Maryland company, regulatory compliance comprise more than 25% of the total project cost.16 In an ‘accelerated’ schedule, it still takes about 10 years to complete a hydropower project. 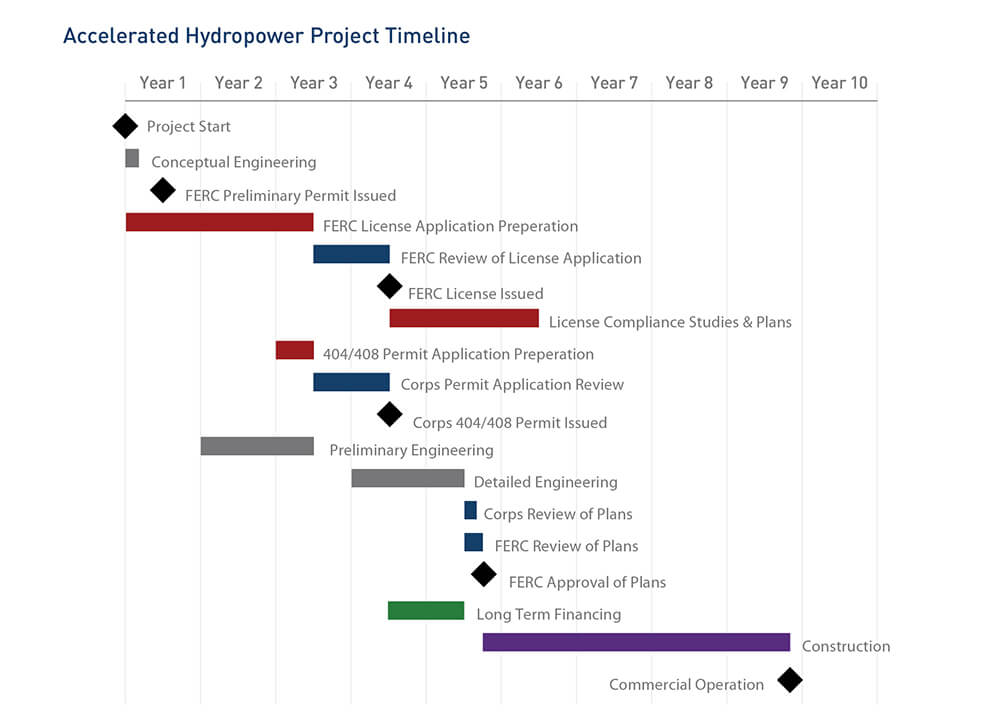 Example of an accelerated development schedule for a hydropower project licensed under the Federal Energy Regulatory Commission.
Source: Department of Energy’s Hydrovision Report, Ch 2: State of Hydropower in the United States17

Navigating through the bureaucratic alphabet soup should not be so costly for America’s largest renewable power industry. Currently, little coordination exists between agencies and sometimes within the same agency. The lack of communication often results in redundant information requests from different government agencies.

The Federal Energy Regulatory Commission (FERC) currently coordinates the federal hydropower permitting process. Yet, ‘federal coordination’ means little because FERC has virtually no enforcement mechanisms if other agencies do not comply. One proposal would allow the Council on Environmental Quality to be the arbitrator.18 FERC generally holds robust jurisdiction over federal infrastructure decisions and power markets. It also has similar responsibilities over other energy infrastructure projects, such as natural gas pipelines.19

Improve the efficiency of environmental studies

A number of reforms could be made. Resources should be made publicly available to address common questions that arise during hydropower development or relicensing. Developers should be able to apply findings from another study in the area, or submit regional applications where appropriate. Projects that have no environmental impact, such as electrifying municipal water systems, should also be exempted from the federal permitting process. 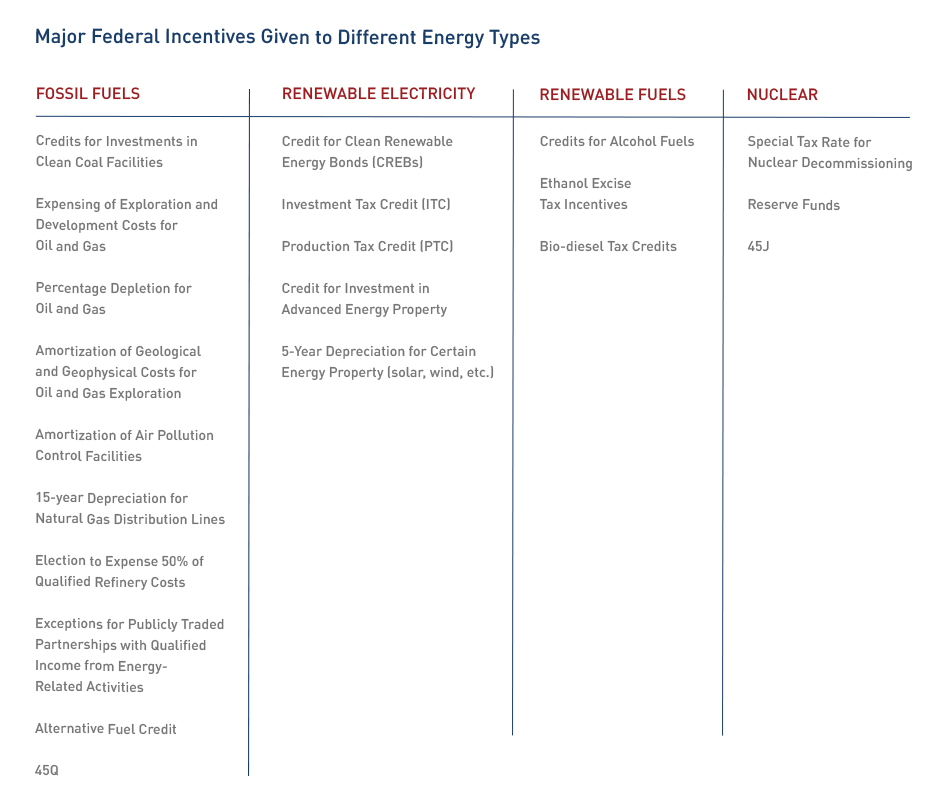 Hydropower as a renewable resource

The federal government is required to purchase 7.5% of its energy from renewable sources, pursuant to the Energy Policy Act of 2005. Existing hydropower, however, is not recognized as renewable under the purchasing requirement.22 Allowing existing, underutilized hydropower capacity to qualify could reduce federal spending while preserving the government’s commitment to clean energy.

Renewable energy technologies qualify for one of two main federal incentives: the PTC and the ITC. The federal Investment Tax Credit (ITC) is based on the value of property investment, whereas the Production Tax Credit (PTC) is based on each unit of electricity produced. There’s even different levels of incentives within each tax credit. By creating differentiated tax credits, the government is distorting markets.

This patchwork system of credits is confusing and distorts markets. The levels and lengths of incentives have little correlation to technology maturity or market share. The hydropower PTC expired at the end of 2016.