Hydrogen has the potential to connect the electricity, industrial, and transportation sectors to maximize resources in the overall energy system. It can be stored for seasonal energy security, burned as a clean heat source, turned directly into electricity, or used as a clean component in chemical production. Every year, the United States produces around 10 million metric tons of hydrogen– enough to power 2.4 million transcontinental flights for a Boeing 747. This may seem like a lot, but it only equates to about three percent of the oil produced in the United States.1 Hydrogen needs to be produced in a cleaner way and deployed to make any significant impact in global decarbonization.

1. Modernize the Scope of Research and Development
A new hydrogen research and development statute is needed to broaden the scope of the DOE into other high impact areas, including hydrogen production, hydrogen transportation, and uses outside of the transportation sector such as industrial feedstocks and clean heat for industry.

2. Focus on Near-term Success
Offices should direct their focus and funds to the technologies that will enable the greatest, near-term impact on decarbonization and jumpstart other hydrogen applications. For production, that means carbon capture retrofits for existing production facilities and reducing the cost of electrolysis. On the application side, that means greatly expanding the scope of hydrogen use beyond transportation to include industrial applications and the production of low-emission fuels.

The first major hydrogen research, development, and demonstration bill was passed in 1990, and the current authorization from the Energy Policy Act of 2005 focuses almost exclusively on applications for light-duty transportation and stationary fuel cells. Despite more than a decade of research, these specific hydrogen applications have failed to reach high levels of commercialization in the United States. Over time, there has been a growing recognition that hydrogen has a role to play in the broader energy system – not just in light-duty vehicles. Hydrogen is gaining traction and attention as a tool to mitigate climate change in the power, industrial, and transportation sectors. The DOE’s hydrogen work has evolved into broader and higher impact spaces that no longer reflect its most recent authorization, therefore, the DOE’s hydrogen RD&D work needs to be reauthorized.

Road Map to a US Hydrogen Economy

1. Incentivize Production and Utilization
Policies to encourage and incentivize the production and use of clean hydrogen should be established. Wherever possible, policies should be technology-neutral, rewarding low-emissions hydrogen production regardless of whether it is generated by natural gas with carbon capture, renewable energy, biomass, or nuclear energy.

In 2020, for the first time, U.S. industrial emissions may have exceeded power emissions, and will likely be the top source in the future. Almost all of the hydrogen produced today is used for chemical production and oil refining; essentially all of that hydrogen is created using carbon-emitting sources without carbon capture. 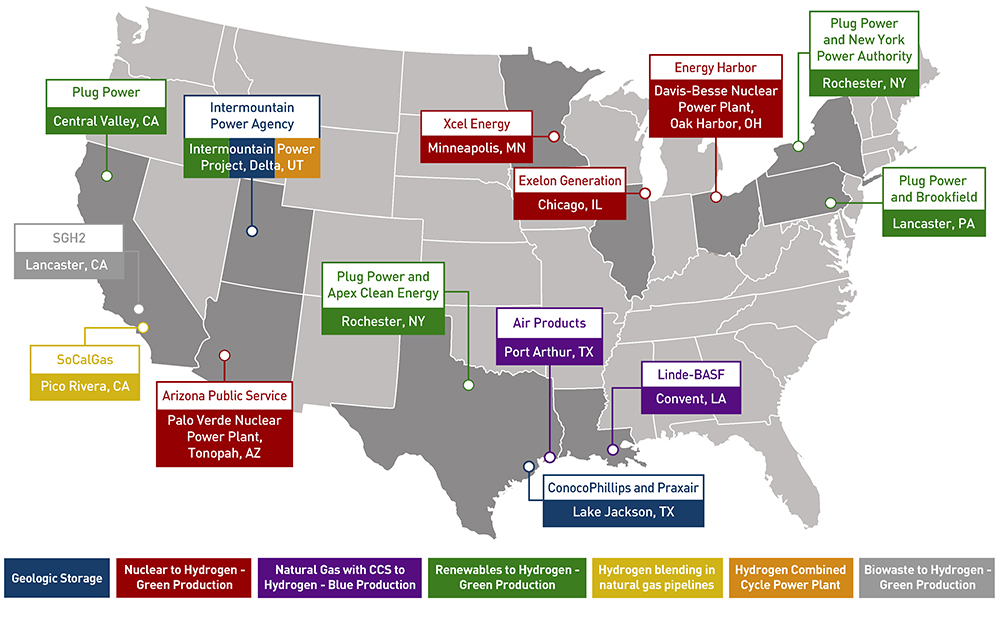 Cleaning up this hydrogen feedstock with carbon capture or creating it through electrolysis would make an easy, low-carbon, drop-in solution. Furthermore, there are additional opportunities for clean hydrogen outside of chemical production, including transportation, industrial heat, and power generation. Industrial processes require heat to create products, and today, much of this heat is supplied by carbon-emitting sources without carbon capture. Like natural gas, hydrogen can be moved through pipelines and, with the proper infrastructure, it could be used to create low-carbon heat.

Road Map to a US Hydrogen Economy

1. Seed infrastructure for regional hydrogen “hotspots”
Co-locating the production and utilization of hydrogen will reduce transportation and storage costs.

3. Research hydrogen energy carriers
Energy carriers, such as ammonia, can be used to more easily store or transport hydrogen.

Similar to how Uber initially launched in just a small number of cities before developing a critical mass of drivers and riders nationwide, hydrogen likely will follow a close model. These early hydrogen “hotspots,” centered around low-cost hydrogen production sources and prime customers, can build the first generation of infrastructure needed. One hotspot already exists in the United States: hundreds of miles of hydrogen pipelines serve Gulf Coast refineries.

When hydrogen has to travel long distances or be stored for several months, it is cheaper to turn it into ammonia and, when the hydrogen is needed, convert it back. Making ammonia is well-known; about three percent of the hydrogen produced in the U.S. today is used to make ammonia for farms, but in this case, it would be used as a vehicle to hold the hydrogen. That ammonia can be directly combusted for energy, converted back to hydrogen, or, with additional research, it could be used directly in fuel cells.

Another promising solution is to piggyback off of the current natural gas pipeline system. Britain’s third largest city, for example, determined that it was possible to run 100 percent of their network on hydrogen. Initial work in the U.S. shows up to 20 percent of hydrogen can be blended into existing natural gas pipelines without any issues. More research and collaboration with natural gas pipeline owners is needed to explore this opportunity in more parts of the United States, and how government codes and standards may need to be revisited to accommodate these new applications.

A Clear Focus on the Future