Posted on February 11, 2021 by Natalie Houghtalen

Hydrogen is the smallest atom in the universe, yet this tiny molecule has huge potential to connect energy generation, energy storage, transportation, and industry. Hydrogen, in its natural state, is composed of two hydrogen atoms linked together that store energy. Hydrogen can move between the electricity, transportation, and industrial sectors to decrease the waste in the overall energy system.

It’s been nearly 20 years since hydrogen has gotten as much press and attention as it is today – a resurgence likely due to the revelation that more than the electricity sector must be decarbonized to tackle climate change.

Every year, the United States produces around 10 million metric tons of hydrogen, which is enough to power 2.4 million transcontinental flights for a Boeing 747. Currently, hydrogen is mostly used for fertilizer production, chemical production, and oil refining.1 However, hydrogen could be produced using cleaner methods, and its modest market size could be expanded to heavy industry applications, energy storage, and heavy duty vehicles. The challenge is producing more clean hydrogen at scale. Today, only a fraction of U.S. hydrogen production is considered low-to-no carbon.

Hydrogen Production (“the hydrogen rainbow”)
Hydrogen, in reality, is a colorless gas, but it is talked about widely using three color classifications: grey, blue and green. 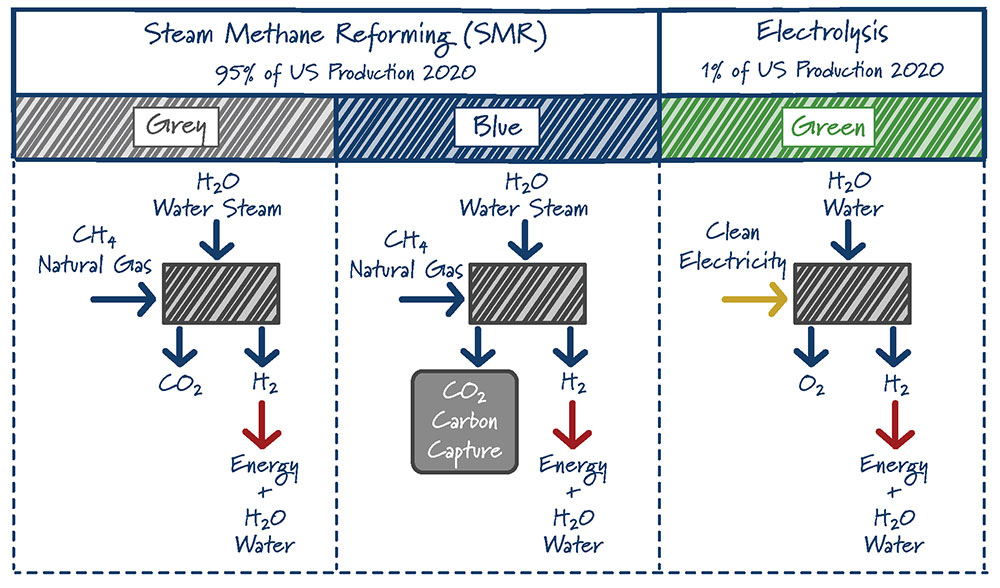 Grey and Blue hydrogen are produced with fossil fuel inputs. In both cases, coal or natural gas are converted to hydrogen and carbon dioxide. The grey hydrogen process allows the CO2 to escape into the atmosphere, but blue hydrogen incorporates carbon capture technologies. Carbon capture technologies are already commercial, with facilities capturing millions of tons of carbon dioxide across the world – including in the United States. Capturing carbon dioxide is economical, requiring a relatively small cost premium over grey hydrogen and is several-fold cheaper than green hydrogen.2

Turquoise hydrogen Another method of hydrogen production that is considered carbon negative is biomass gasification with carbon capture. This simply means that biomass, such as recycled paper or waste from crops, is heated to release the gasses. The hydrogen is then gathered, and the carbon from this process is captured and sequestered.

Energy Storage
Hydrogen is an emerging option for long-duration energy storage. Like natural gas, it can be stored for long periods of time and transported to different locations. Since hydrogen is a gas, it can be stored in different sized containers, from small tanks to large underground caverns. Large-scale hydrogen storage can be especially useful for industry because it provides a steady source of hydrogen as a feedstock even if the amount of hydrogen being added is irregular, like if the hydrogen is made during periods of excess electricity. 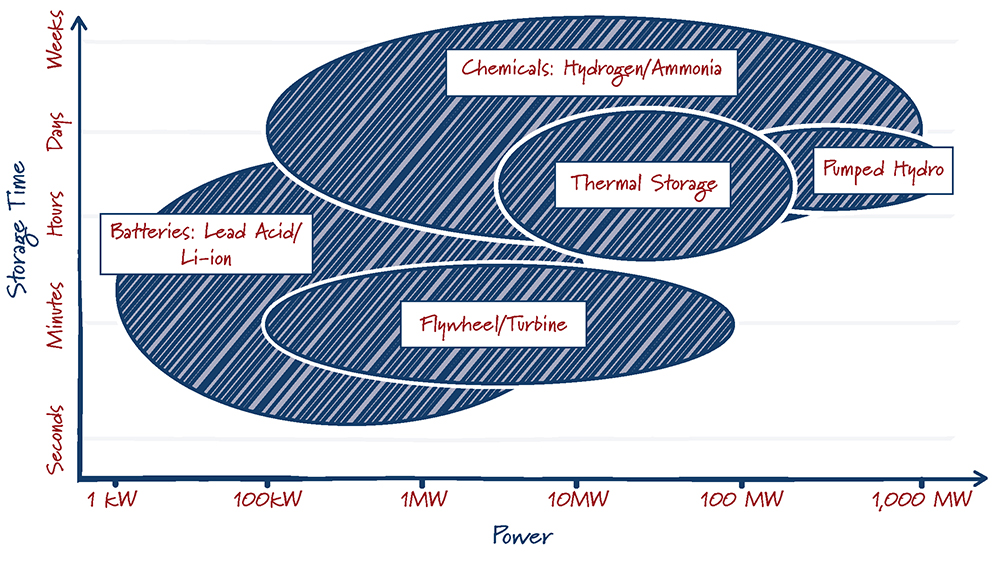 Regardless of how hydrogen is produced, it can be used in many applications, including as a feedstock for industry, a fuel for vehicles or power plants, or burned for heat.

Industry
Several industries have been using hydrogen to create their end products for many years. Ammonia, which is used in fertilizer, is composed mostly of hydrogen atoms. Refineries use hydrogen to reduce the sulfur content in diesel fuel.3 It is also becoming a popular feedstock for reducing the CO2 emissions from the steel production process, making it a ready alternative for metallurgical coal.4 Hydrogen itself can also be burned as a clean, high-temperature heat source for heavy industry applications that currently rely on natural gas.

Natural Gas Blending
Research shows small proportions of hydrogen can be directly blended into our existing natural gas network. Blending larger ratios requires more research because natural gas pipelines were not designed with hydrogen in mind. Hydrogen is a smaller and more reactive molecule than natural gas, so it is more prone to corroding and escaping existing natural gas pipelines. Today, this blend can be adopted into most natural gas applications such as home heating, high grade heat for industry, and fuel cells and turbines for power generation. Many natural gas power plant manufacturers are designing their systems with fuel optionality in mind.

Fuel Cells
An electrolyzer uses electricity and water to make hydrogen, but fuel cells do the opposite. Fuel cells use hydrogen to make water and electricity. Fuels cells are most familiarly used in vehicles, but they have many applications outside of the transportation sector. Fuel cells can be used as back-up energy for emergencies, like a back-up generator for a hospital, or for clean, steady electricity, like for a data center. Some fuel cells can even work in two directions – they can both create and consume hydrogen. These “reversible” fuel cells are useful for energy storage.

Hydrogen has huge potential to be the great connector between energy and industry for decarbonization and is on the tipping point of massive market change. By incorporating hydrogen into the clean energy tool box, the U.S. is one step closer to reducing global carbon emissions. Hydrogen has the potential to abate 6 Gt of CO2 globally.5 The three biggest areas of impact for clean hydrogen are as a clean heat source for industry, a clean substitute for the grey hydrogen already used in industrial processes, and heavy-duty transportation.

Annual CO2 Emissions Could Be Reduced by 6Gt in 2050 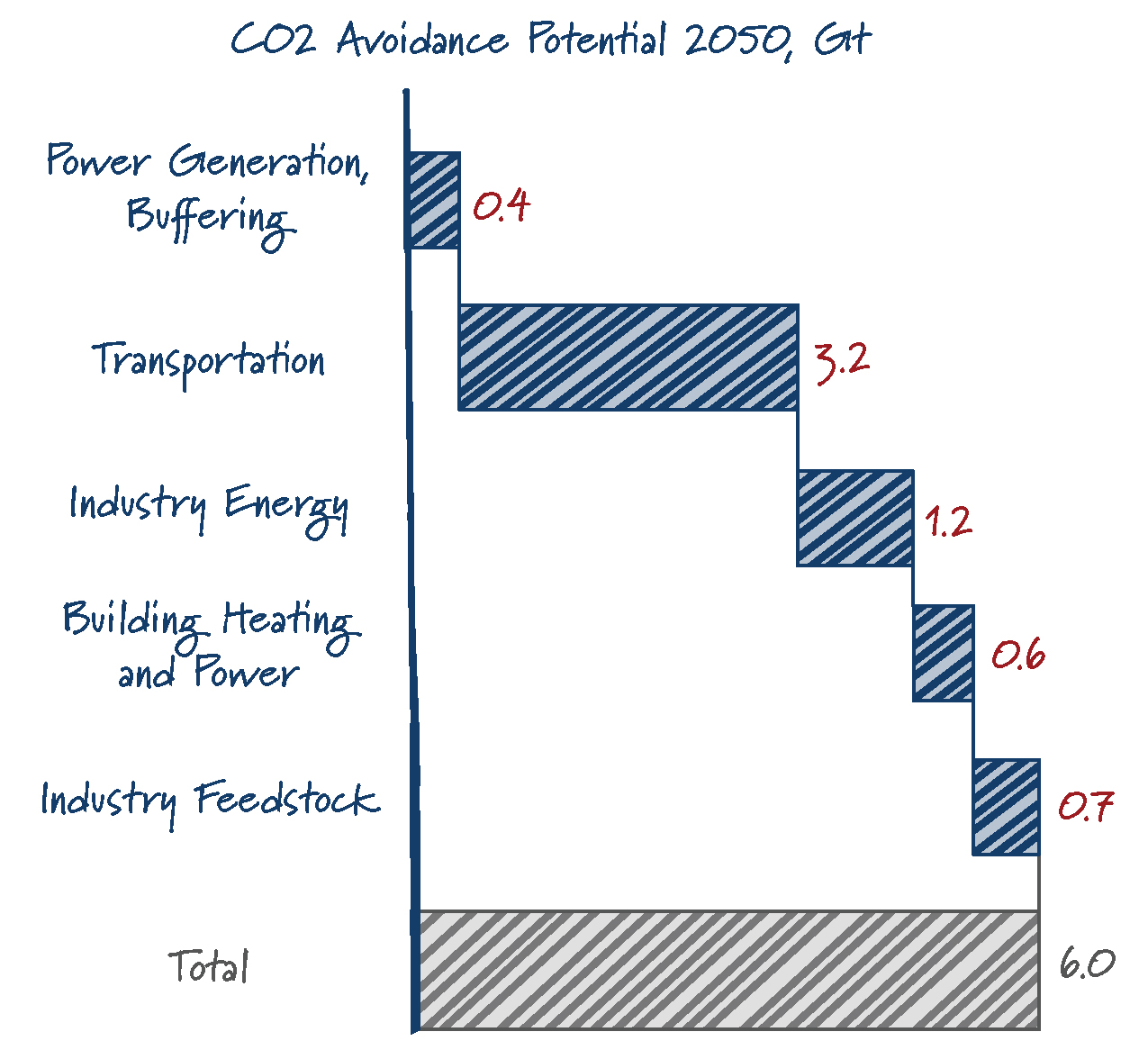 The hydrogen ecosystem is vast, has a lot of potential to decarbonize, and touches many clean energy technologies. Supporting these many decarbonization pathways require significant coordination across offices in the DOE.

Nuclear Energy (NE)
Large conventional nuclear power plants are becoming less cost competitive in deregulated markets. Nuclear power was designed to be a reliable, steady, baseload source of energy, but the needs of the electricity market are not the same today as they were in 1970, so our plants are required to become more adaptive. In times when the sun is shining and the wind is blowing, many of our reliable, steady nuclear plants are selling electricity at a loss, leading to premature closures. To combat these premature closures, the Office of Nuclear Energy’s Light Water Reactor Sustainability Program12 is currently pursuing four nuclear-hydrogen hybrid energy systems projects to increase plant flexibility and provide an additional source of revenue: FirstEnergy Solutions is adding a electrolyzer to the Davis-Besse in Ohio, Xcel Energy is considering a high temperature electrolysis project at one of its plants in Minnesota, Arizona Public Service is planning to use a reversible fuel cell at Palo Verde for energy storage that can be used when electricity demand is high, and Exelon is adding a PEM electrolyzer at one of its 14 plants.13

Fossil Energy (FE)
The Office of Fossil Energy (FE) participates in several efforts in the hydrogen space. FE’s experience with natural gas gives it the expertise in pipelines and geologic storage. For this reason, FE focuses on hydrogen blending with natural gas and large scale geologic storage of hydrogen. Since almost all hydrogen produced in the United States today is from natural gas steam methane reforming, the Office of Clean Coal and Carbon Management in FE focuses on the carbon capture retrofits required for turning the grey hydrogen into blue hydrogen. FE also coordinates with EERE and NE on integrated energy systems and reversible fuel cells.

Modernize DOE Research Scope. The current research and development authorization is from the Energy Policy Act of 2005 and focuses on transportation. The statute should be updated to draw focus to the other high impact areas such as industrial feedstocks and industrial heat, consistent with DOE’s H2@Scale framework.

Coordinate Across Offices. Hydrogen has many means of production and many end uses. The cross-cutting nature of hydrogen makes it an amazing tool for decarbonization, but also makes it extremely hard to establish ownership between the different program offices.

Expand DOE Focus on Maturing Technologies. The DOE offices are already doing work on hydrogen demonstrations, but the number and scope of demonstrations should be expanded to accelerate the adoption of hydrogen as a clean energy resource. Production, distribution, and end uses should be developed and demonstrated simultaneously.

Mature Hydrogen Storage Technologies. Hydrogen is a promising technology for long-duration energy storage. But as a gas, hydrogen is leaky and requires specialized containers for transportation or energy storage applications.