Carbon capture hit a policy trifecta at the end of 2020 and start of 2021, and that momentum has continued with recent, exciting commercial developments. ExxonMobil formed a new business line that will deploy $3 billion by 2025 and advance 20 new carbon capture opportunities, Summit Agricultural Group announced plans for the largest carbon capture and storage project in the world to decarbonize the biofuel and agricultural industry throughout the Midwest, and even Elon Musk got onboard by funding a $100 million carbon capture competition. These announcements underscore the criticality and popularity of this technology to meeting global decarbonization goals. This is true for carbon capture at power plants, manufacturing facilities and even direct air capture.

While promising technologies are being developed to utilize carbon emissions in fuels and materials, storage of carbon dioxide deep underground remains a tried and true mitigation solution and is feasible around the U.S. because of the vast amount of available storage resources. However, we can only capture and reduce carbon emissions as fast as we can permit the projects to do so. And the success of the rapidly growing number of carbon capture projects hinges on the ability to timely obtain a single permit – the Environmental Protection Agency’s (EPA) Underground Injection Control (UIC) Class VI permit.

Underground Injection of Captured Carbon
Today, the changing climate is largely caused by larger amounts of greenhouse gases emitted into the air. Another way to think about this: like a bathtub being filled with water, greenhouse gases are building up in the atmosphere. Carbon dioxide, the most common greenhouse gas, is not toxic like a normal air pollutant – we breathe it out all the time and plants use it as food, helping to “drain” carbon dioxide from the atmosphere. But, like a bathtub, if it fills faster than plants can manage, a little overflow is not ideal, and significant overflow will cause all kinds of problems. Capturing the carbon dioxide is obviously the first step, but then what do we do with it?

There are a number of techniques for utilizing or sequestering captured carbon. The underground injection control program was created by EPA to regulate injection wells for sequestered carbon dioxide. Unlike common residential water wells that pull up water, this program regulates injection wells that push down various substances. EPA developed the rule to ensure whatever was being injected did not risk Underground Sources of Drinking Water (known as “USDWs”).

Within the program, there are six “classes” of injection wells. The newest class of wells, referred to as Class VI, was developed in 2010 for the injection of carbon dioxide into deep rock formations for long-term geologic sequestration. How can we be sure that injecting and storing carbon dioxide is safe and it remains in place? First of all, the carbon dioxide is injected well below sources of drinking water and is permanently sealed into the reservoir by an impermeable layer of rock, called cap rock. Second, injecting and sequestering carbon is a tried and true technology and has been used for decades to help safely produce oil, a process known as enhanced oil recovery. Injection of carbon dioxide for enhanced oil recovery is subject to the Class II program, which regulates wells used to inject fluids associated with oil and natural gas production.

The Six “Classes” of Injection Wells

Injection wells are regulated by the EPA unless a state or tribal agency has applied for and obtained primary responsibility to implement the program, otherwise known as primacy. To obtain primacy, a state or tribe must adopt laws and regulations at least as stringent as the EPA’s minimum requirements. Many states already have primacy for the other injection well classes and have experience in implementing the UIC program. As of today, only North Dakota and Wyoming have obtained primacy for the Class VI program. However, no state has issued a Class VI permit yet. 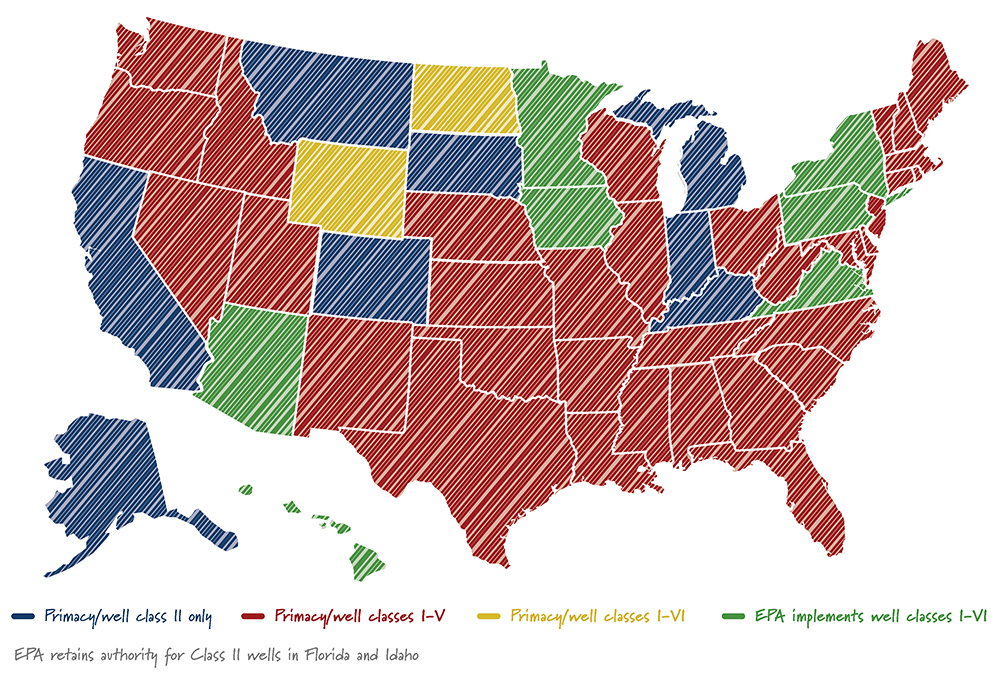 Challenges with the Class VI Program
A program that was meant to protect the public’s drinking water has instead created many challenges for cost-effective deployment of carbon capture and sequestration. Of the more than 700,000 wells the UIC program has permitted, only two Class VI wells have ever been permitted for injection, both located at the Archer Daniel Midland’s ethanol plant located in Illinois. The typical permit application processing time was six years for both of these permits. This timeline is a significant barrier to develop storage capacity at the rate needed to capture carbon dioxide as well as for projects trying to take advantage of the incentives provided by the 45Q tax credit. Additionally, there are significant costs associated with complying with the onerous corrective action and monitoring requirements of the Class VI program, which are not always proportionate with the risk to drinking water from the project.

Removing the Obstacles of Class VI
The Class VI permit approval process must become more efficient to enable growth of carbon capture and sequestration projects while also protecting drinking water resources. Changes that should be made to the Class VI program include:

It is clear that carbon capture and sequestration must be a tool in the proverbial technology toolbox. Streamlining the permitting process and removing obstacles for the deployment of carbon capture is crucial for the success of this technology in large-scale CO2 emission reductions.