For a quick primer on the Versatile Test Reactor (VTR), take a look at ClearPath’s 2018 post, “A Versatile Way to Grow Advanced Nuclear Power,” by Jeremy Harrell and Spencer Nelson.

A lot has changed since the Nuclear Energy Innovation Capabilities Act was signed into law in 2018. NEICA, as we call it, directed the U.S. Department of Energy (DOE) to determine the need for a specific kind of nuclear testing capabilities here in America. You may be shocked to learn that some U.S. nuclear energy companies send fuel and materials overseas for testing. If that is shocking, then you’re never going to believe where. Russia.

In the industry, we would say the U.S. could benefit from a versatile, fast neutron source to accelerate the testing of advanced nuclear fuels, materials, instrumentation, and sensors to enable development and deployment of advanced reactor systems. To translate in plain English, we need to get serious about having complete nuclear energy testing capabilities — ASAP.

To know where we are today, let’s go back a few years. Congress appropriated $35 and $65 million in FY18 and FY19 in order for the DOE’s Office of Nuclear Energy to begin developing the conceptual design, cost estimate, and schedule for the VTR. Those appropriations have been put to appropriate use, and DOE designated four “Critical Decisions” that need to be completed before ultimately approving the start of operations. In February 2019, DOE completed Critical Decision Zero (CD-0) when it approved the mission need for the VTR. Today, supported by another $65 million dollars in FY20 appropriations, another “Critical Decision” is nearing completion. Critical Decision One (CD-1) is expected to be accomplished this fiscal year after DOE completes its review of the proposed schedule and cost estimates. 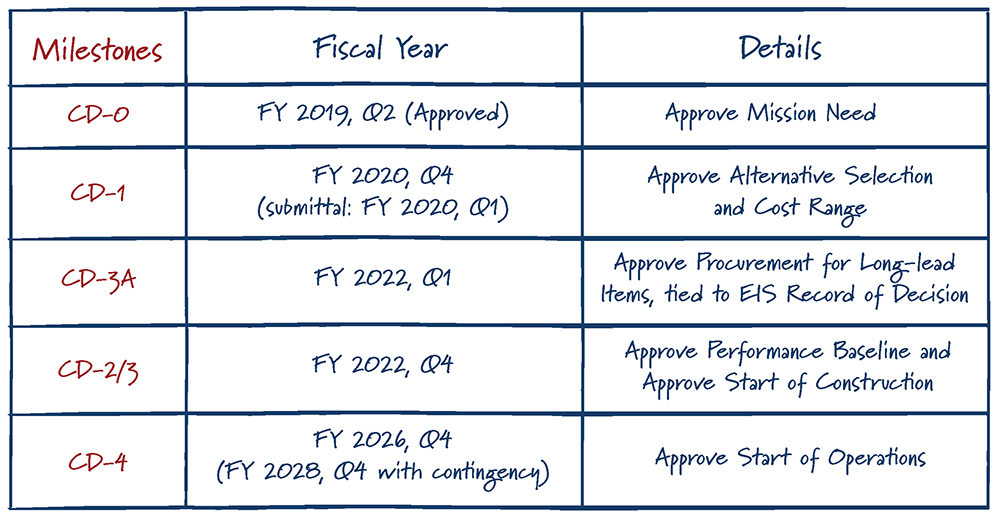 Idaho National Laboratory (INL) is the lead national lab for the VTR project. Argonne National Laboratory, Los Alamos National Laboratory, Oak Ridge National Laboratory, Pacific Northwest National Laboratory, and Savannah River National Laboratory also provide strong support to the project. DOE’s National Laboratory system has some of the world’s brightest nuclear energy minds working on this, but they know they cannot accomplish this ambitious project alone. To date, they have partnered with many other organizations – including universities, and private companies. This variety of talent includes experts in reactors, design, construction, testing, materials, and data analytics. These experts are looking to crack the code of having the most cost efficient yet effective facility. They determined to base the VTR on mature sodium fast reactor technology from General Electric Hitachi’s (GEH) PRISM design. This reactor has decades of design and testing experience as well as an important pre-application safety evaluation report from the Nuclear Regulatory Commission (NRC). Another reactor company with experience in the technology, TerraPower, is collaborating with GEH on the VTR.

Do or Die Funding Decisions
Even with this diverse and talented team, the VTR’s success will depend on funding decisions made in the very near future. The cost is initially estimated to be $3 to $6 billion with a completion schedule of 2026 to 2030. While it is possible these numbers will slightly change during the CD-1 review, by all accounts, this critical project will require significant federal resources.

“The clear outcome of the Working Group’s efforts is confirmation that it is in the nation’s national security interests to preserve the assets and investments of the entire U.S. nuclear enterprise and to revitalize the sector to regain U.S. global nuclear leadership.”

The VTR is a great example of the U.S. taking steps to regain its leadership since the only other fast neutron testing capability is currently available in Russia, where a new more advanced test facility is also under construction. 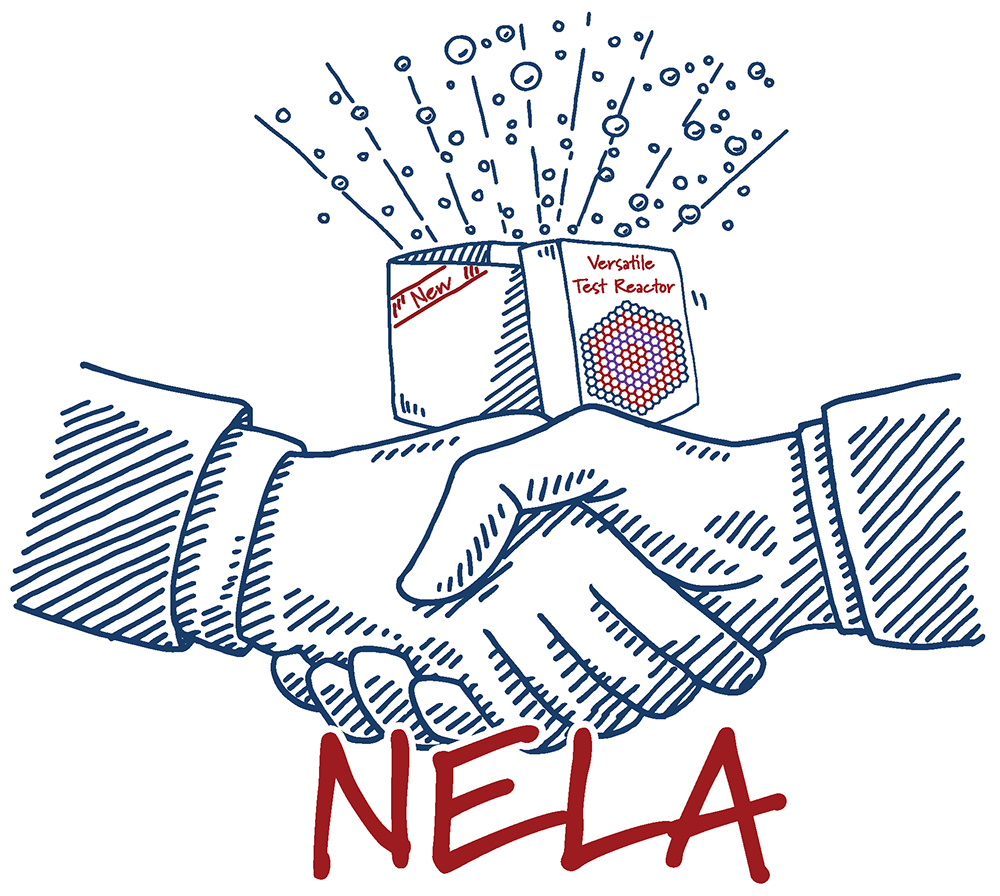 Aligned with this recommendation, the president’s FY21 budget request included $295 million dollars for the VTR, a large increase from the $65 million dollars appropriated in FY20. This new value might turn some heads and raise questions. However, when looking at the funding to date, the cost estimates, and the ambitious completion schedule of FY26, it is easy to see why these resources are necessary to ensure success.

The House and Senate both recognize the need for supporting the VTR and have proposed bipartisan legislation. The Nuclear Energy Leadership Act (NELA) and the Nuclear Energy Research and Development Act (NERDA) both include funding for the VTR.

Additionally, there is significant federal support for the VTR, and DOE and the VTR team have organized the personnel and workload to spend these needed resources efficiently. Adequate funding will allow current personnel to continue working at full capacity, and the VTR team can increase hiring or create new public private partnerships for the engineering design and construction phase of the project. However, less than the required yearly appropriations would cause significant delays as staff would be moved to different projects. This would make it less likely the VTR can meet its low cost and scheduled completion targets.

Today, the COVID-19 pandemic has created uncertainty around future projects. As Congress continues to debate how to stimulate the economy and finance domestic infrastructure projects, the VTR must be a part of this discussion. The project is ready to ramp up efforts to meet an aggressive timeline if given the resources, and DOE’s soon-to-be-released Environmental Impact Statement (EIS) for the VTR only adds to the potential for a quick start.

An Opportunity We Can’t Afford to Miss

France, Japan and South Korea Have Expressed
Interest in Supporting the VTR 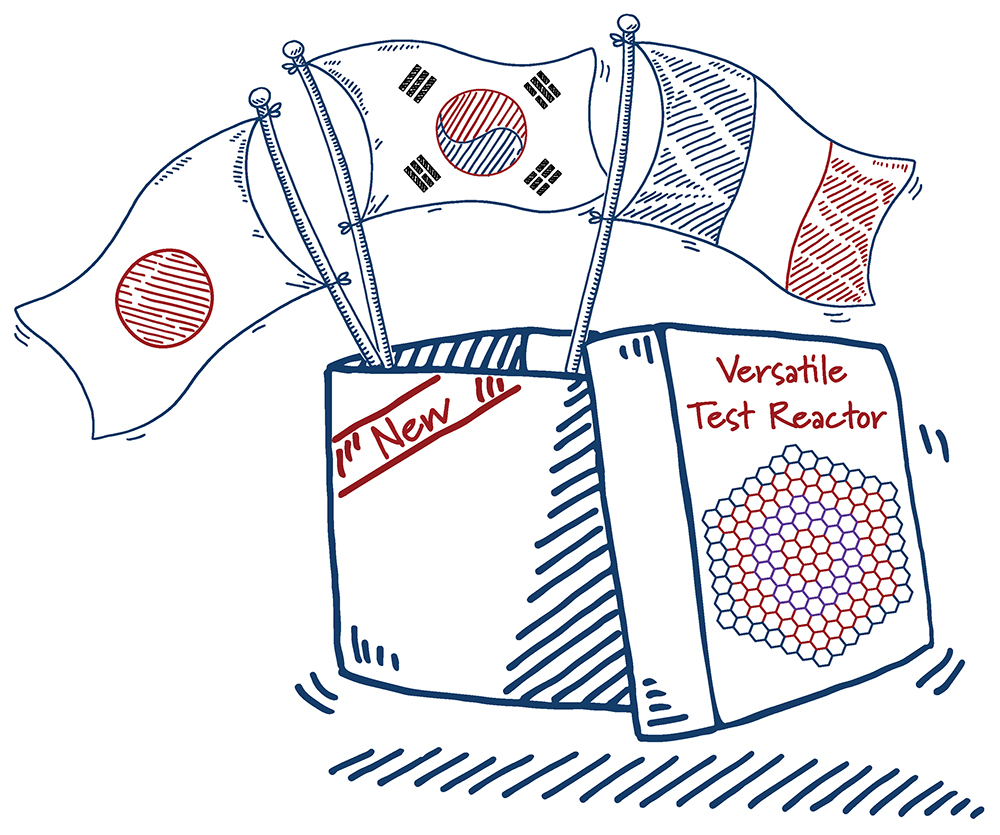 If Congress does not appropriate the required resources, there is a more serious impact to the project – the loss of investor confidence. Well, that, and we will continue to rely on Russia for testing. Funding, through either a future stimulus or adequate appropriations, would increase confidence that the U.S. is serious about the VTR. This confidence can bring in additional funding from both domestic and international partners. Already, three allied countries – France, Japan and South Korea – have expressed interest in supporting the VTR. France and Japan have historical sodium fast reactor operating experience, and South Korea has expressed interest in the technology. Simply put, U.S. investment brings in outside support – and outside resources. These partnerships have the dual benefit of decreasing the burden on American taxpayers while strengthening ties with our allies.

Conversely, less than the necessary appropriations or a lack of stimulus funding would negatively impact both the overall cost and schedule. This would signal to private industry that the VTR is a risky investment as it might not be operational for over a decade, if ever. This would compound how to fully fund the project, and would ultimately increase the cost to the taxpayer. Furthermore, a lack of decided resources would send a message internationally that the U.S. is not interested in advanced nuclear energy. Perhaps the most significant impact to industry is that other countries might hesitate to buy a reactor from one of the dozens of domestic advanced nuclear companies if they do not believe the U.S. government supports the technology. A lack of international cooperation also would make it harder for the U.S. to compete against state-owned enterprises, further weakening our global leadership in a market that the Department of Commerce estimates is valued at $500-740 billion over the next 10 years.

In FY20, recognizing the continued need to reinvigorate the domestic nuclear industry, Congress generously supported multiple projects to either demonstrate or commercialize advanced nuclear reactors at the DOE and the Department of Defense. These additional projects are a direct result of the bipartisan support for nuclear energy. As Congress considers both a potential stimulus and future appropriations, they should prioritize these projects, the VTR, and other Office of Nuclear Energy programs which create American jobs and support global leadership.

Long-term success means a vibrant commercial U.S. nuclear industry that can compete domestically and internationally. We are close to regaining nuclear energy leadership — building the VTR would show the world we mean business.