Our nuclear energy industry is at a crossroads. Nuclear, America’s clean energy workhorse, makes up the majority of our zero-carbon power. And it’s so reliable that some plants can operate non-stop for nearly two years before refueling.

Right now, however, we are tragically seeing our existing fleet continue to shrink. The huge reactors we are used to seeing need to relicense again or they will shutter. While these reactors were initially licensed in the 1960s, 70s and 80s, they are still producing 55 percent of clean energy in America. If that fleet goes, so too does demand for fuel, which led the Administration to establish the Nuclear Fuel Working Group on how to maintain this vital national asset.

There are three unique dynamics at play that need to be addressed, or we risk losing our atomic edge.

First, China and Russia are developing and beefing up their nuclear energy portfolios as we speak — exporting reactors to strategically significant countries around the world.

Second, next generation reactor designs — which are much smaller and even more efficient — are on the brink of commercialization. Exciting new small modular reactors and microreactors can provide decades’ worth of clean energy to a variety of new markets — domestic and abroad — including heavy industry and remote villages that currently rely solely on diesel power.

And third, our ability to manufacture the uranium fuel that allows nuclear energy to produce such incredible amounts of power is not up to snuff. 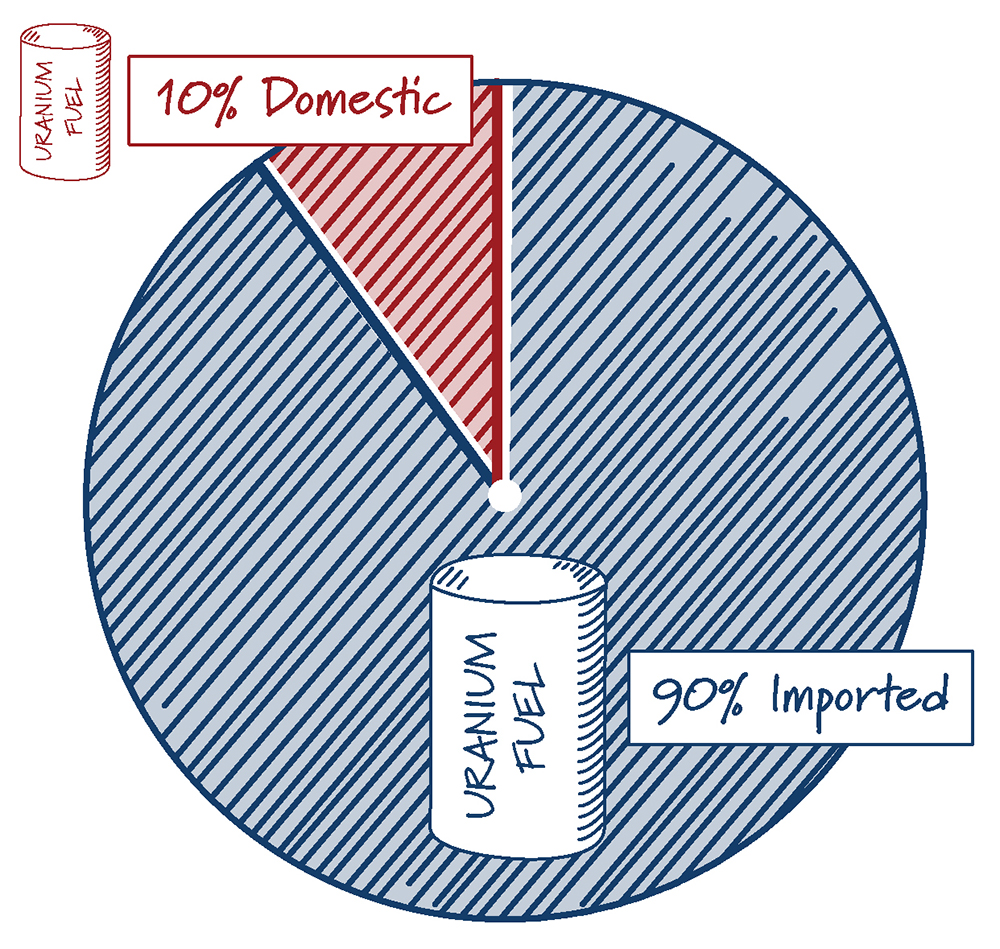 Over the years, as demand flatlined and faced competition from state-owned enterprises in China and Russia, our domestic production has atrophied. Today, America imports about 90 percent of the uranium used in our operating fleet, and we currently lack the capability to produce the advanced fuels required for the next generation of reactor technologies.

The Administration recognized these dynamics and has taken the wise, long view that a strong nuclear fuel supply industry will not exist without a thriving, growing demand for that fuel. The U.S. Department of Energy (DOE) recently released the Administration’s Nuclear Fuel Working Group Report outlining a Strategy to Restore American Nuclear Energy Leadership. The strategy supports moonshot technology and robust American exports to build new reactors around the world.

The report covers the entire fuel and reactor supply chain, but maybe the biggest key to the strategy is establishing an advanced nuclear research, development, and demonstration moonshot — a first for nuclear energy at DOE. Targeted demonstrations can accelerate wide-spread commercialization, which is essential for national security and to remain competitive, as China now has 48 operating reactors, and is currently constructing 11. Meanwhile, we’re down to 95 and only building two.

The DOE also tackles how to develop a domestic source of new nuclear fuels, including High Assay Low Enriched Uranium (HALEU), which is needed to power the next generation of American advanced nuclear technologies.

The strategy recognizes that a Versatile Test Reactor (VTR) program is needed to accelerate the development of new materials and fuels for advanced reactors — and calls for an investment. Today, some American nuclear energy companies have to send fuel and materials overseas for testing. Funding and completing the VTR in the mid-2020s will ensure that American companies can continue to develop innovative designs, and do not need to rely on testing in countries like Russia.

Funding and Completing the VTR in the Mid-2020s Is Imperative

This strategy also directs financing agencies like the Export-Import Bank and International Development Financing Corporation to support the global commercialization of American technologies. Establishing a chief federal nuclear technology export official to lead this effort would streamline efficiencies but also signal to overseas buyers that we mean business. By focusing on untapped clean energy market opportunities for American innovators — while maintaining competitiveness against China and Russia — we can reassert our global leadership with nuclear energy.

Strategy is only as good as implementation, and this one can turn into reality — almost entirely by the Nuclear Energy Leadership Act (NELA). NELA is cosponsored by nearly one-quarter of the Senate and 25 members in the House, divided roughly equally between the parties. It was reported out of the Senate Energy and Natural Resources Committee in September and awaits action in the House.

Clean, reliable power, new international energy markets, and strong national security — it almost sounds too good to be true. America invented nuclear power — and we again have a strategy to lead the world.