Posted on September 13, 2018 by Jeremy Harrell and Spencer Nelson

The Nuclear Energy Innovation Capabilities Act is the most significant nuclear energy bill Congress has passed in years. Tucked inside is the authorization for development of what’s generally known as a versatile test reactor (VTR), also referred to as versatile neutron source or fast neutron source.

Regardless of what you call it, there’s been a lot of buzz about this test reactor in the 115th Congress.

The FY18 omnibus spending plan enacted this past spring specifically appropriated DOE resources to it for the first time[1]. A bicameral FY19 Department of Energy spending bill followed suit with a $65 million investment. One of the first bills to pass the House this Congress, the Department of Energy Research and Innovation Act (H.R.589), prioritizes the VTR.

And the Department of Energy’s Office of Nuclear Energy is undertaking a three-year planning study on the needs and design of the VTR. With an increase in congressional appropriations for the project and some elbow grease at the DOE, the department could complete the planning study sooner and even break ground at a national lab before the end of 2020.

So what is this reactor exactly, and why is it so important to the future of nuclear power?

What is the VTR?

Long story short, the VTR would be a new reactor at a national lab that is used to test materials with very high energy neutrons (imagine a neutrons moving at 9000 miles per second – that’s fast!). The VTR will be able to operate with much higher energy neutrons than even the Department of Energy’s existing Advanced Test Reactor (ATR) housed at Idaho National Laboratory.

Traditional nuclear reactors in operation in the U.S. use ordinary water (known as “light water”) in order to slow down, or moderate, the neutrons released in nuclear reactions necessary to create power. The development of this style of reactor has benefited from dual-use in both terrestrial power generation and on submarines and aircraft carriers.

Why do we need a new test reactor?

But next-generation nuclear technologies, among other important changes, may not use water or moderators at all. Some of these reactors are known as “fast-spectrum” or “fast reactors”. They don’t use a neutron moderator (and can be cooled by liquid metal, gas, or molten salt) and can have some benefits over other reactor designs, including more efficient operation and reduced waste production.

The VTR Would Be New To The U.S. 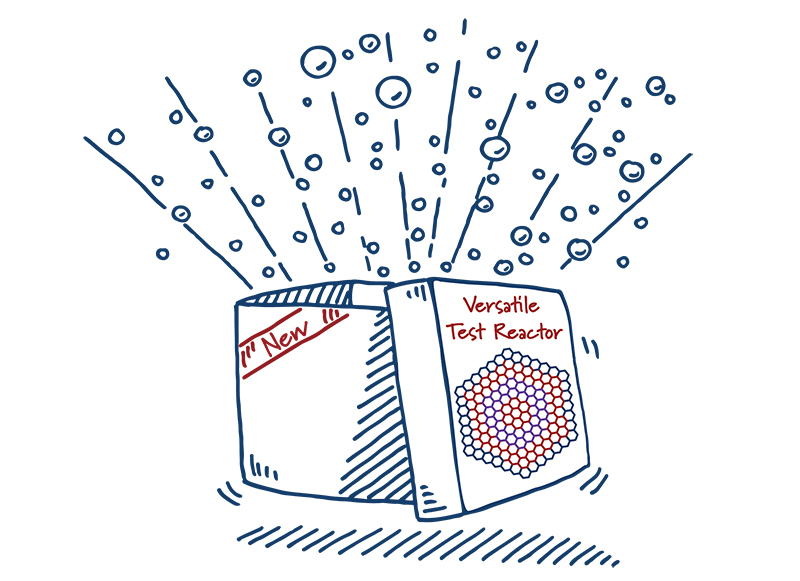 Because these fast reactors use neutrons moving at much higher speeds (which are therefore imbued with higher levels of energy) than existing reactors, they have a different interaction with materials in the reactor.

As there are no fast-spectrum research capabilities or fast reactors currently operating in the United States, only limited testing equipment exists to comprehensively characterize the performance of fast-reactors. While this lack of testing infrastructure doesn’t completely preclude commercial fast reactors in the near term, it does limit the range of fuel and material designs to those tested in the 20th century before fast-spectrum capability was eliminated. The VTR would be a new fast-spectrum research facility at a national lab, similar to the Advanced Test Reactor at the Idaho National Lab, which is used for research using slower neutrons (known as “thermal spectrum”).

Essential facility for commercial and research use

The VTR is essential for both accelerating commercial development of advanced reactor designs and for expanding the frontier of future nuclear energy research. Current regulatory structures at the Nuclear Regulatory Commission (NRC) rely on experimental data to validate the performance and safety of materials and fuels before they can used in a commercial reactor. Without a domestically available VTR, fast reactors designers will likely be limited to historically validated materials and fuel designs. An operational VTR will allow validation of new materials and concepts, as well as new reactor types such as gas and molten salt fast reactors.

Limited to no availability in world – except in rival nations

Without the development of an American VTR, these types of crucial experiments will need to be performed outside of the United States, likely in Russia or China. There are no operational fast spectrum reactors in North America, Europe, Japan or Korea. Previous American testing has been conducted at the BOR-60 reactor in Russia, most notably by TerraPower, but access to BOR-60 has grown more difficult in recent years and transporting samples to and from the facility is difficult. The China asset is largely closed to the civilian market. An American-hosted VTR will enable easier access to testing for both private and university researchers, minimize the loss of nuclear security and trade secrets, and expand access to other U.S. allies in a way that reliance on Russian or Chinese facilities would not.

Accelerating the development of a new generation of advanced nuclear reactors – designs that are smaller, cheaper, more efficient and scalable – is essential to meeting that immense global market. Ensuring a commercially available VTR user facility is operating in the next decade is important to making that potential a reality.