Like any new gadget, trend or song the latest and greatest are what people talk about. In the energy world, renewable energy has become the hip new item for the last few decades. For most people, wind and solar immediately come to mind, but renewable energy sources have been around for much longer than the last few decades. Just like your Spotify playlist, you never want to leave out the “oldies but goodies” — in the case of renewable energy, that’s hydropower and geothermal. The first hydropower dam was operational in 1882, while the first geothermal power plant came online in 1904. In fact, there are over 200 hydropower plants that have operated since the early 1900s!

According to the United States (U.S.) Energy Information Administration (EIA) renewable energy accounted for roughly 18% of electricity in 2019.

2019 Electricity Mix of the United States

This graphic illustrates the entire U.S., however, there are states where renewable energy generates the highest percentage of electricity, and some states with minute renewable resources. A prime example for high renewable energy penetration is the Pacific Northwest – states like Washington, Oregon, and Idaho have massive amounts of hydropower. Surprisingly, Maine, Vermont, and even South Dakota are also dominated by renewable sources including hydropower, wind and biomass. The electricity mix in states like Wyoming and Utah are still primarily using coal, however, most Western states have enormous potential for geothermal, specifically enhanced geothermal systems.

There has been a wave of corporate commitments from companies like Microsoft’s net-negative pledge, to 48 utility companies pledging to reach low to net zero carbon emissions in the next few decades. Renewables will certainly be a part of these commitments.

EIA’s 2020 American Energy Outlook suggests a slow increase in electricity demand with natural gas and renewables meeting new generating capacity, particularly solar power, followed closely by wind over the next 30 years. Yet, hydropower and geothermal energy are expected to remain relatively constant. If corporate America is shifting to clean energy, and electricity demand is on the rise, increasing clean energy on the grid moving forward will be essential. But what does that actually mean? And more importantly, how can we increase clean, renewable energy sources like hydropower and geothermal.

The electric grid is complex – it requires instantaneous balancing of supply and demand. While we are able to store electricity in small increments, storing large quantities for days or weeks at a time is still cost prohibitive. This is where hydropower and geothermal come in: they are knitted into the web of electricity markets, providing flexible and reliable electricity. While wind and solar have intermittency challenges, the classic renewables can provide all ancillary services and easily participate in capacity markets. Capacity markets ensure adequate resources – to meet demand and to have an additional reserve margin. The relationship between ancillary services and renewable resources is illustrated in the table to the right. 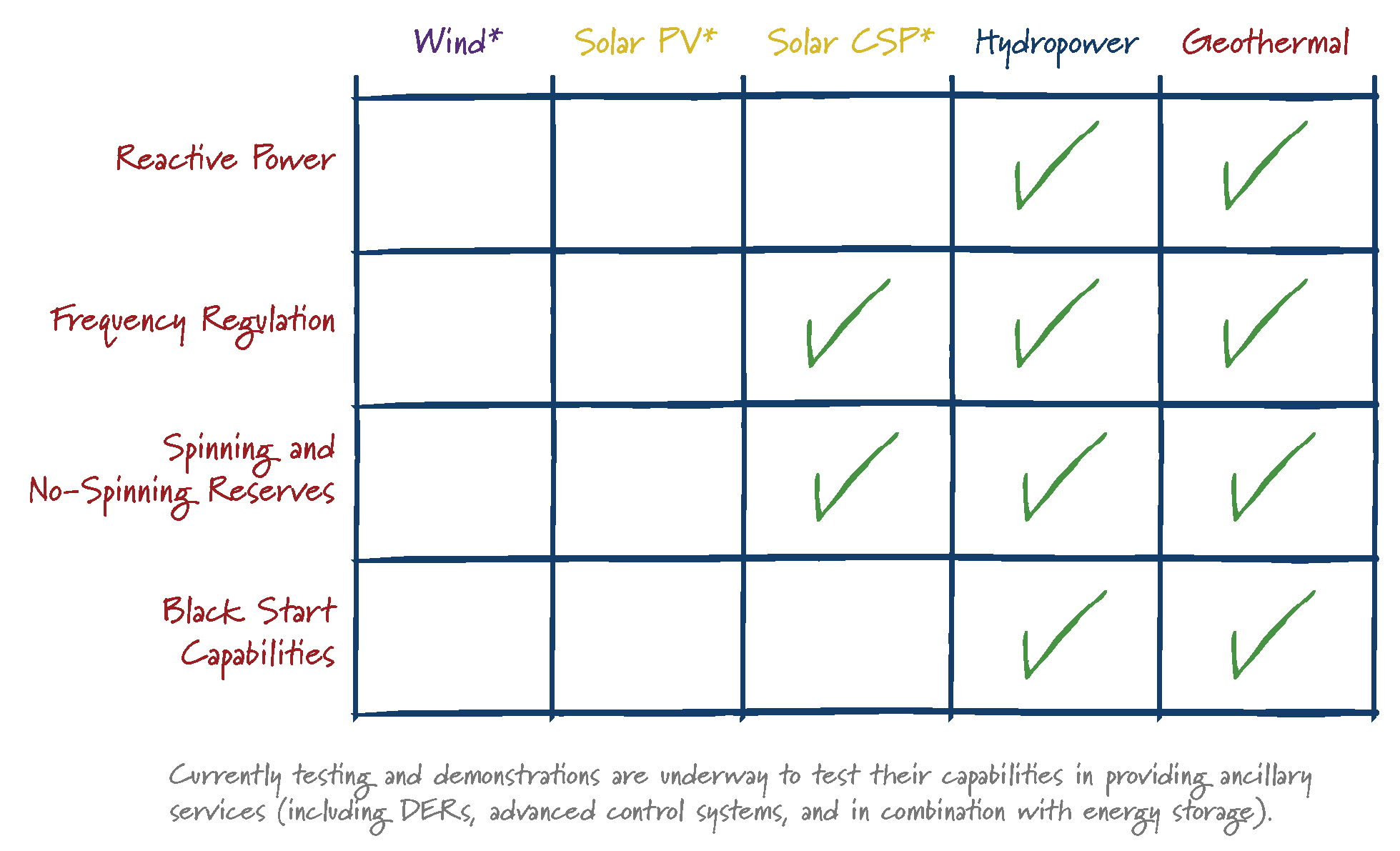 Considering the current COVID-19 pandemic is already shedding light on infrastructure gaps and preparedness, we almost always take for granted the ability to use electricity at the flip of a switch, or to have access to clean water. Could you imagine extended blackouts during quarantine at your home, or worse, a power outage at a hospital who is already over capacity, powering ventilators?

Hydropower and geothermal are unique for renewables in that they can be on all the time – capable of meeting demand. This means these assets can be dialed up or down to follow the needs when there are shifts in generation, such as when the wind stops blowing or the sun sets. Wind and solar are not only impacted by resource availability, but can vary seasonally in generation output. A great example of a diverse renewable resource mix is Nevada. Nevada’s generation includes solar (12%), geothermal (9%), and hydropower (5%), roughly accounting for 26% of their generation mix. However, when evening demand is high for the lights of Las Vegas, their natural gas assets will be utilized for instantaneous use alongside their firm renewables – hydropower and geothermal.

Increasing clean and all renewable energy on the grid is fantastic, but we shouldn’t leave the original renewables out – hydropower and geothermal should be a part of the conversation moving forward. They’ve been with us for over a hundred years for a reason!

Currently, we have 101 GW of hydropower capacity or enough to power roughly 75-101 million homes.

GeoVision estimates geothermal electricity generation could increase up to 60 GW and provide heating or cooling services for more than 73 million homes by 2050. Currently, we have 2.5 GW of geothermal capacity.

Tapping into these opportunities highlighted by DOE has the potential to add more than 100 GW of clean, renewable, always-on, and incredibly low carbon resources to the electricity grid. We can’t forget about hydropower and geothermal moving forward; it’s paramount for all clean energy discussions. Call them vintage, retro, or just the classics; but the oldest renewable sources can be the hot (or cool) energy trend again.