The U.S. hydropower fleet produces enough electricity to power more than 20 million households each year,1 making it the fourth largest electricity source after natural gas, coal and nuclear.2 Hydropower harnesses the force of flowing water to create electricity. It is one of the oldest and most affordable ways to make electricity. In fact, one of the world’s first commercial power projects made hydroelectricity from Niagara Falls in 1896.3 In a testament to their durability, many hydropower projects built during that era are still churning out electrons today.4 New Development Opportunities After peaking in the 1960s, the stream of hydropower development gradually slowed to a trickle. One of the main reasons is the bureaucratic federal licensing process. Developers must navigate a licensing process that can take more than six years, spanning multiple state and federal government agencies.5 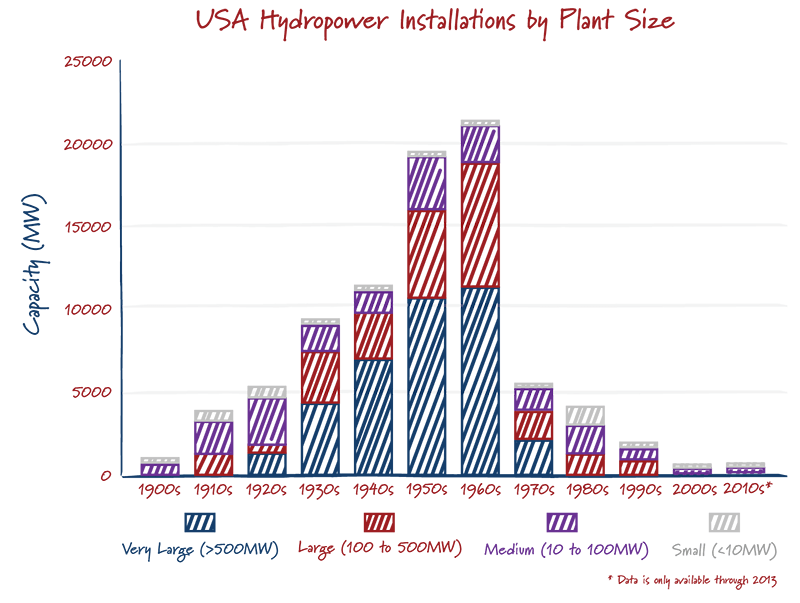 Despite the recent slowdown in construction, the Department of Energy is optimistic on future growth in the American hydropower industry. In a detailed 2016 study, the department forecasted 50% more U.S. hydropower capacity (50GW) by 2050. Future projects in the U.S. will not look like the large, iconic projects typically associated with hydropower, such as Nevada’s Hoover Dam and Washington’s Grand Coulee. The best sites for large hydropower have already been developed. Instead, new potential is concentrated in five main types of projects: 1) Non-powered dams, 2) retrofits, 3) pumped storage hydropower 4) conduit or “energy-recovery hydropower”, and 5) new-stream reach. 1. Non-powered dams Only 3% of our nation’s 80,000 dams can produce hydroelectric power. The vast majority were built for other purposes such as flood control, recreation and navigation. According to the Department of Energy, adding hydropower capabilities to these dams would be about the equivalent of 24 coal power plants. Most of the potential is located at locks and dams owned by the U.S. Army Corps of Engineers.7 2. Retrofits One quarter of U.S. hydropower capacity is owned by the Army Corps of Engineers. Most of the infrastructure is more than 50 years old, and according to reports by multiple organizations, these assets are significantly underfunded and have underperformed. Upgrading these units with modern equipment would allow the federal government to generate more power from the same flows. This missed opportunity also translates to direct costs on the taxpayer. A 2010 study found that the Corps would lose about $7 billion over 20 years if it neglected to modernize its fleet.

3. Pumped storage hydropower Pumped storage hydropower is the most common type of grid-scale energy storage, making up 97% of the market today.9 It works like a big battery that can be charged by pumping water uphill and discharged by letting the water flow back down across a generator. With increasing amounts of intermittent renewable energy such as wind and solar power, pumped storage can help balance the grid and maximize reliability. More than 20GW of new pumped storage capacity have been proposed for new development, more than the capacity of 4 million Tesla Power Walls.10,11 4. Conduit or “energy-recovery” hydropower Conduit hydropower generates electricity from existing flows of water through man-made systems, be it pipes in municipal systems or irrigation canals on a ranch. Energy-recovery hydropower is environmentally friendly – there are no fish in our pipes and the water would be transported anyway. Not only does it create clean electricity, it also makes use of energy that would have been otherwise wasted. 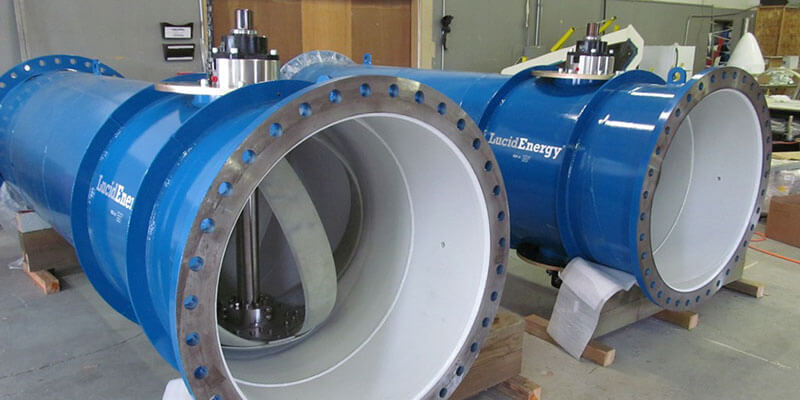 5. New stream-reach New stream-reach adds hydropower development in stream and river segments that are not generating electricity. There are more than 3 million streams in the U.S. with the capacity to add at least 65GW of technical potential. These projects, however, are often limited by economic and environmental constraints.

Hydropower as a renewable energy resource Despite rapid wind and solar growth over the past decade, hydropower remains the largest source of renewable energy. In 2016, it produced more than seven times the electricity as solar. Unlike intermittent renewable energy sources, hydropower can produce electricity on demand. This makes the grid more reliable and flexible. It’s also a capable workhorse, generating large shares of electricity in states such as South Dakota (40%)13 and Washington (80%)14. 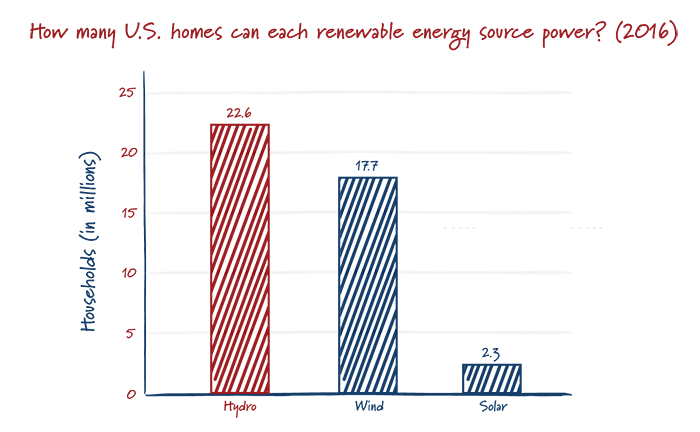 Hydropower is a very clean resource because it does not produce any emissions when run. Indirect methane emissions seeping up from reservoirs can result. But even after accounting for this, the average hydropower plant is still cleaner than solar power.16 One class of hydropower (discussed in more detail below) does not even need dams. 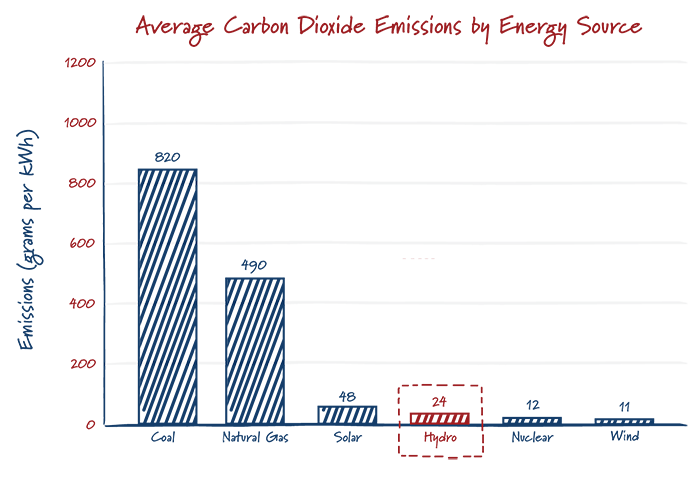 Although hydropower produces virtually no emissions, it receives discriminatory policy treatment compared to other types of clean energy technologies. The federal government does not label power from existing hydropower projects as renewable energy and thus does not include it in federal renewable energy purchasing requirements.