Carbon, the sixth most abundant element found on Earth, can be released into our atmosphere in the form of carbon dioxide (CO2) and is the foundation of all life. The mechanism that balances the amount of CO2 in our atmosphere is called the carbon cycle where carbon atoms continually travel from the atmosphere to the Earth and then back into the atmosphere. The total amount of carbon on our planet does not change. However, where the carbon is located — in the atmosphere or on Earth — is in flux. Much of the carbon on our planet is trapped in glaciers, rocks, and underground sediments, while the rest is located in the ocean, atmosphere, and in living organisms — in the carbon cycle, these are known as the reservoirs or sinks. Carbon can be released into the atmosphere as CO2 through a variety of both natural and man-made methods.1

So, how do we get rid of the CO2 already in the atmosphere? There are multiple carbon dioxide removal (CDR) solutions, but before we get into those, it’s important to understand a few basics.

Carbon mitigation, sometimes referred to as carbon avoidance or carbon abatement, refers to technologies and pathways that reduce or avoid future emissions that would otherwise be emitted into the air. Carbon mitigation solutions include carbon capture utilization and storage (CCUS) to reduce the amount of emissions from a power plant or industrial facility, replacing emitting sources with other fuel sources like nuclear or renewables, and process efficiency improvements that achieve the same end goal with less energy – like switching to a Nest Thermostat.

Think of it like a diet. You could eat healthy from the start to prevent unnecessary weight gain (mitigation), or you could fill up on all the tasty treats you want and try to work off the weight later by exercising (removal). However, any good nutritionist or personal trainer will tell you that you need both exercise and a healthy diet to live a healthy lifestyle. Similarly, we need both mitigation and removal if we are going to meet the targets being set by nations and businesses. 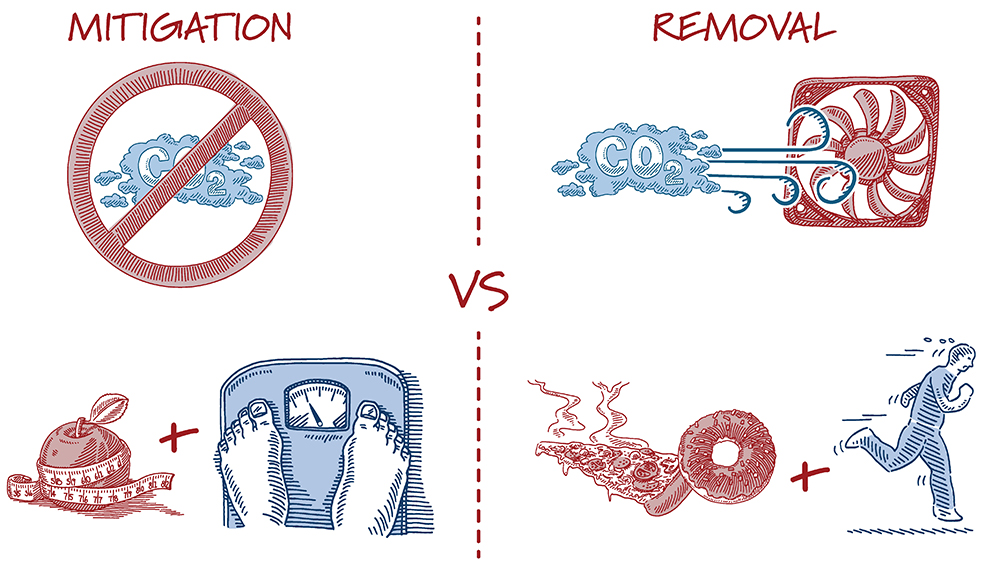 Carbon removal is not a new concept – humans have been planting trees for years with the goal of reducing CO2 in the atmosphere. Though tree planting is one way to remove excess CO2, knowing how much CO2 is removed and how long it stays out of the atmosphere is still being researched and debated today.

Terrestrial ecosystems like forests, tropical rainforests, and grasslands currently remove around 30 percent of CO2 emissions annually — that’s roughly 9.5 gigatons of CO2.2 Some of these natural removals could be increased. When it comes to natural carbon removal pathways, there are two main paths: forests and farms. Natural carbon removal solutions, though typically only having a permanence of 100 years, are lower in cost averaging $50 or less per ton of CO2 removed.3

Farms – Soil Carbon Sequestration
Soil carbon sequestration is another terrestrial natural carbon removal solution. Through this process, land management practices are modified to increase carbon uptake of soil to result in a net removal of CO2 from the atmosphere.

Through agriculture, there are many ways to increase carbon in soils including:

Though natural solutions are a crucial carbon removal tool, it is difficult to measure and monitor the amount of carbon removed through natural processes; therefore, scientists and researchers depend on assumptions and estimates to determine the rate of CO2 removed from the atmosphere. Additionally, with solutions such as soil carbon sequestration and forestry-based carbon removal, carbon stored in soils or plants can be released back into the atmosphere if they are disturbed (i.e. dug up, deforested, burned in a wildfire, displaced by humans moving through the area, etc.). Finally, terrestrial lands are in constant competition with developers or food supply chains due to limited space. In other words, converting farmland to forests would reduce the supply of food, space for energy plants, communities, buildings, and so on.

Direct Air Capture (DAC)
DAC, is an engineered process that chemically scrubs CO2 from the atmosphere like a giant air purifier. The CO2 that is collected can then be permanently stored underground in geologic formations or used to create other products such as plastics, building materials, or synthetic fuels. Companies like Twelve are working on a variety of uses for CO2 while others are even turning CO2 into diamonds. DAC uses similar technology to CCUS but the main difference is that CO2 extraction is done from the atmosphere instead of at point sources such as power plants or industrial facilities.

Example of Direct Air Capture Adapted From the Climeworks Process

Engineered mineralization of CO2 can be done using mineral formations rich in alkalinity such as basalt and peridotite, and alkaline industrial wastes such as fly ash, kiln dust or iron and steel slag. There are three ways the reaction can occur: 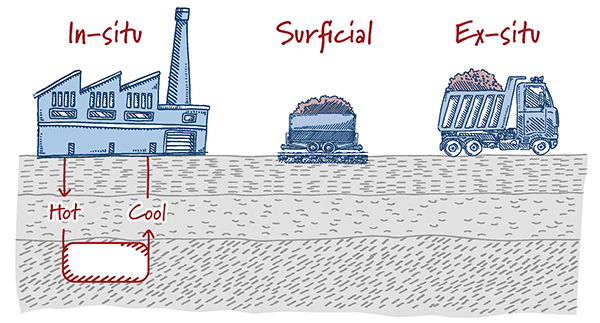 Bioenergy with carbon capture and storage (BECCS)
Biomass is the term typically used to refer to plant material that has absorbed CO2 from the atmosphere and can be used as a fuel to produce electricity or heat. BECCS is an engineered process that captures emissions when the biomass is converted into energy to prevent those emissions from getting back into the atmosphere. From a carbon cycle perspective, it can be a net reduction of CO2 from the atmosphere. BECCS has the benefit of producing energy while removing emissions. The captured CO2 can then either be stored underground in geologic formations or in long-lived products like concrete. 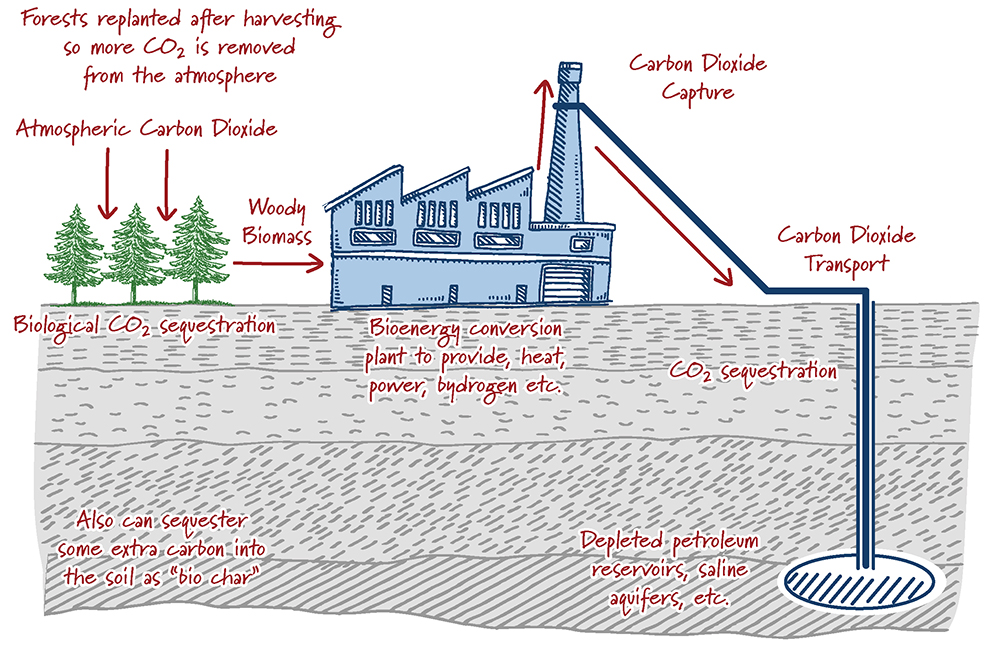 Biochar
Biochar, also referred to as black carbon, is a product rich in carbon that looks similar to black dirt and is created through a process called pyrolysis. Pyrolysis thermally decomposes organic materials like wood chips, plant residues, manure, or other agricultural waste products at elevated temperatures in the absence of oxygen, or gasification.10 This process is for the purpose of transforming biomass into a more stable form that can sequester CO2. Because biochar is so rich in CO2, some farmers and cultivators use it to increase soil fertility and crop yield.

Though biochar is considered an engineered hybrid solution which combines natural carbon removal with pyrolysis or gasification technology, the amount of CO2 stored in biochar is difficult to calculate and therefore most measurements are estimates. Recent estimates show that biochar’s carbon removal potential ranges from 1.1 to 3.3 GtCO2eq/yr by 2030.11

Similar to on-land CDR approaches, ​​ocean CDR can be divided into two broad categories: engineered and natural pathways, with some overlap between the two. Ocean carbon removal pathways are nascent compared to other land-based carbon removal solutions. There is significant apprehension when it comes to ocean-based projects due to potential ecosystem impacts. As such, most projects are in the research and development phase with few in the pilot testing stage. Some popular ocean carbon removal pathways that are being explored are direct ocean capture and coastal blue carbon sequestration. 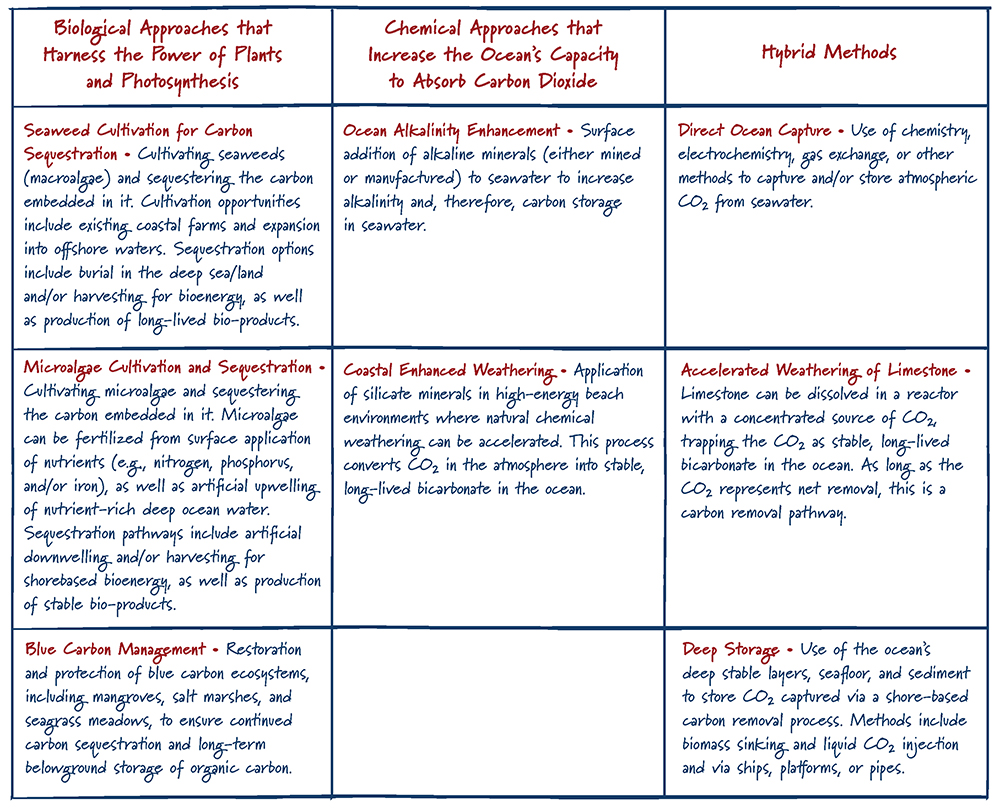 Direct Ocean Capture
Similar to how DAC filters CO2 out of the atmosphere, direct ocean capture, or DOC, scrubs CO2 from seawater through chemical separation. A notable project is one being led by the U.S. Naval Research Lab (NRL) in extracting hydrogen and CO2 to produce jet fuel. While DOC appears to be a promising technology for ocean carbon removal there are still many unknowns, particularly how this technology impacts ocean chemistry and if it is disruptive to ecosystems. Therefore, environmental impact assessments and further testing are needed before it can be piloted at sea.

Coastal Blue Carbon
Coastal blue carbon refers to plants, soils, and vegetation that are typically grown in coastal areas such as marshes, mangroves, wetlands, and seagrass. Because many of these coastal habitats have been damaged over time, much of the historic focus has been on conservation and restoration. In recent years, research has focused on alternative pathways as restoration efforts approach their limits due to limited space. Ongoing research includes companies such as Running Tide, which are proposing sinking macroalgae to the seafloor to be permanently stored, and researchers who are converting coastal biomass into clean fuels, livestock feed, or products such as flip flops.

With so many carbon removal pathways emerging, it’s important to determine what makes a carbon removal solution “high-quality.” There are many factors to consider, such as whether the solution requires energy and if clean power or clean fuels can be used; durability or how long the CO2 stays out of the atmosphere; scalability or if the solution can be scaled to extract large quantities of CO2 at a cost-effective rate; measurability or whether the exact amount of CO2 is able to be quantified; verifiability or whether the CO2 removed can be verified by a third party, and so on. To add on another layer of complexity, characteristics that make the cut can be subjective. However, for simplicity’s sake, the base-level characteristics any carbon removal pathway should be able to have is certainty in measurability, durability, verifiability, and scalability using clean power or clean fuels.

In the last two years, companies with carbon-reduction goals like Microsoft, Amazon, Stripe, and Shopify have invested more than $3 billion into carbon removal technologies. As opposed to speculating how to remove their historic emissions through carbon offsets, these companies are directly dedicating resources to carbon removal pathways. Microsoft released a white paper detailing lessons learned from the process which outlined key takeaways from the existing carbon removal market. Microsoft concluded two things: they can’t meet their internal carbon negative commitment without carbon removal and that they need to use clear carbon math. Hence why carbon removal solutions that have clear accounting, in terms of tons of CO2 removed from the atmosphere, are vital. Within this same time, many emerging carbon removal companies have prioritized high-quality carbon removal solutions. A few notable companies include Charm Industrial, Heirloom, CarbonCapture Inc., Running Tide, Noya, IWVC Inc., Swiss-based Climeworks, and Canadian-based Carbon Engineering. Most of these companies are currently in the initial design or pilot phase for their independent technologies, such as Carbon Engineering’s DAC facility in the Permian Basin which has a planned removal capacity of one million metric tons of CO2. Charm Industrial is an early leader, having already removed over 5,000 tons of CO2 since January 2021.

Currently, the Office of Fossil Energy and Carbon Management (FECM), Office of Energy Efficiency and Renewable Energy (EERE), Office of Science, and Advanced Research Projects Agency-Energy (ARPA-E) are the main Department of Energy (DOE) offices that are working to advance CO2 removal technologies. Though there has been a flurry of new carbon removal companies in the last year, many of them have focused on DAC and are still in the early technology readiness phase. There are other pathways, particularly enhanced mineralization and biomass carbon removal pathways, that still require more research and development in addition to DAC. Research in this space also focuses on how to remove CO2 economically and impactfully at scale to avoid significant resource inputs while removing the greatest amount of CO2. Studying and testing various pathways would enable the deployment of a suite of competitive solutions.

As carbon removal remains a novel solution, cost has been a large consideration in the deployment and operation of engineered solutions in particular. Federal incentives such as the 45Q tax credit and the Air Capture Prize program authorized in the Energy Act of 2020 are crucial financial tools for the deployment and operation of DAC technologies. However, in order to incentivize the deployment of a diverse portfolio of CO2 removal solutions, a technology-neutral structure is needed to allow other measurable and permanent carbon removal and storage pathways.

Due to the diverse range of carbon removal solutions with varying levels of technology readiness and carbon removal capacity annually, a portfolio approach is needed. As such, technologies that are able to remove CO2 with a high permanence, measurability, and economic viability should be prioritized.