This year at Climate Week NYC, ClearPath joined the American Petroleum Institute (API) to host a first-of-its-kind event. Instead of attacking the oil, gas and petrochemical industries, conversations highlighted how these industries are perhaps best suited to lead the energy transition at scale.

Providing these technologies with a larger climate platform and gathering the right people in a room to discuss implementing the largest low-carbon energy investment programs in U.S. history is something we need a lot more of.

Economic inflation, high gas and electricity prices, post-Covid global supply chain chaos, Russia‘s war in Ukraine, and China’s effort to dominate markets have all combined to create an ongoing global energy crisis. At ClearPath, we want to tackle the big question — how do we address this crisis and restore American energy independence while working to solve the climate challenge?

You often hear us talk about moving beyond the false choices that have dominated climate discussions: renewables versus fossils, economy versus environment, 100% emissions reduction around the world versus inaction here at home. The truth is, no country, state, city or business will achieve climate goals AND increase supply AND see economic success unless all energy resources are on the table.

A new industrial revolution and clean energy transformation requires an enormous amount of collaboration. Renewables, critical minerals, nuclear energy, hydrogen and fossil fuels — none of these resources get developed or built by themselves in America. It takes private companies with development expertise partnering with institutions to provide access to capital, and both partnering with federal and state governments to allow them to actually put a shovel and some steel in the ground. If this clicks, America will have the technologies needed to make the global clean energy transition cheaper and faster. If it doesn’t, China or Russia will happily lead. 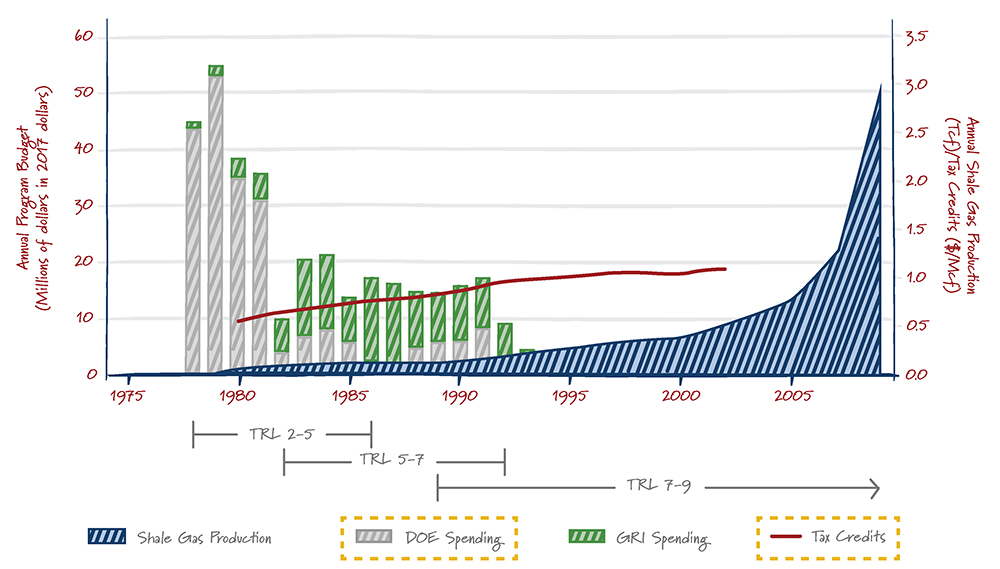 One of the greatest examples in America of both clean energy innovation and public private partnership came from the oil and gas industry. In the 1980s, Texas entrepreneur George Mitchell figured out how to break up shale rocks to release the natural gas stuck inside. This process, called hydraulic fracturing, initially got off the ground with support from the Department of Energy (DOE), which cost-shared R&D and demonstrations in the 1980s and 90s and tax credits from the 80s to early 2000s.

Combined-cycle natural gas turbines now produce 24/7 reliable, affordable power. That early stage investment and production tax credit, together valued at more than $10 billion, expired as the technology matured. Now we have a $100 billion annual shale gas market in America, and 20 percent lower emissions in the U.S. between 2005-2020. Those are the win-wins we need across our energy portfolio.

Clean hydrogen produced from renewables, fossil energy with CCUS, or nuclear energy can also greatly reduce emissions in the industrial, transportation, and power sectors. The Intergovernmental Panel on Climate Change (IPCC) agrees, with low-carbon scenarios all including a significant role for CCUS, hydrogen and DAC. At Climate Week, we heard from companies like Shell, Chevron, Enbridge, Bloom Energy, Climeworks, Baker Hughes, Global Thermostat, and others who are pursuing these clean technologies.

The U.S. has both a cost and energy security advantage relative to our Russian, Middle Eastern, and other global competitors when exporting hydrogen produced from natural gas with a high rate of carbon capture. This is due to abundant U.S. gas supplies and current policy, like the 45Q tax credit, which has no international equivalent.

The law empowered Congress and DOE to launch the most aggressive commercial scale technology demonstration program in U.S. history. Ultimately it established a massive goal of more than 20 full commercial scale demos by the mid-2020s.

Now that Congress has allocated the funding, the U.S. Department of Energy (DOE) is in the process of implementing the IIJA demonstration programs consistent with Congressional direction to maximize the impact of taxpayer resources and ensure that projects are not only selected, but implemented. Success is only possible with strong partnerships, open dialogue, and collaboration between project developers in the private sector and DOE.

Deploying these low-carbon energy technologies as fast as possible is critical for addressing the climate change challenge long term, and successful implementation will advance the shared goals of industry and policymakers: continuing the positive trend of U.S. emissions reduction. Importantly, it will also help transition many sectors of the U.S. economy to cleaner fuels and operations while leveraging the industry’s deep expertise and creating jobs.

There are many parts of our economy where we don’t yet have the cleaner, cost-effective alternatives available at scale needed to build the energy system of the future and help achieve net-zero greenhouse gas emissions. The Energy Act of 2020 and IIJA funding paired with incentives will help America get there.

For example, between the $12 billion for CCUS programs, $8 billion for clean hydrogen hubs, $3.5 billion for DAC hubs, and the 45Q tax credit, new clean energy facilities will soon be established across the U.S.

If done correctly, this public-private partnership effort will be greater than anything we’ve seen in recent history. Not only will developers be able to grow the domestic supply of low-carbon energy and the industrial sector be able to decarbonize its operations, together we can advance the next generation of cleaner energy technologies that could solve both the near-term global energy and geopolitical crisis and the long-term climate change challenge.