Climate change is a problem recognized by Republicans and Democrats alike. A vital tool to addressing this problem is carbon capture – a bipartisan (apolitical actually) technology supported by diverse stakeholders from oil & gas companies1, labor unions2 to climate scientists3,4. According to IEA, carbon capture is a viable technology capable of significantly reducing emissions from industrial facilities or power plants.5 But a little-understood EPA regulation under the Clean Air Act may be a major impediment to building these projects at scale.

EPA’s New Source Review (NSR) program has long been a lightning rod in a larger debate over how aggressive the agency should be in overseeing projects that make modifications to existing power plants and industrial facilities – regardless of their size – from efficiency improvements to emissions controls. The program varies with each administration, making program enforcement incredibly inconsistent.

The level of change that is deemed significant to trigger a new round of permitting under NSR is part art, part science.

If NSR is indeed triggered, a whole host of (often unrelated) changes may be required to the the facility that makes the original project uneconomic. Violations can result in hefty fines: Duke Energy was required to pay nearly $90 million in emissions upgrades and penalties to “settle NSR violation allegations” after an upgrade at an Indiana power plant.6 Duke claimed they were simply conducting maintenance upgrades, though the EPA determined the changes were substantial enough to trigger NSR.

This is one example in a never-ending debate on how a given retrofit project impacts a facility’s ability to modernize.

Now, under the guise of an escalating debate over how to address the role of industry in curbing climate change, the program should be put under the microscope again as companies look to retrofit their coal and natural gas power plants to include technologies that can capture, store and utilize carbon emissions.

Types of Facilities That Could Be Impacted by NSR 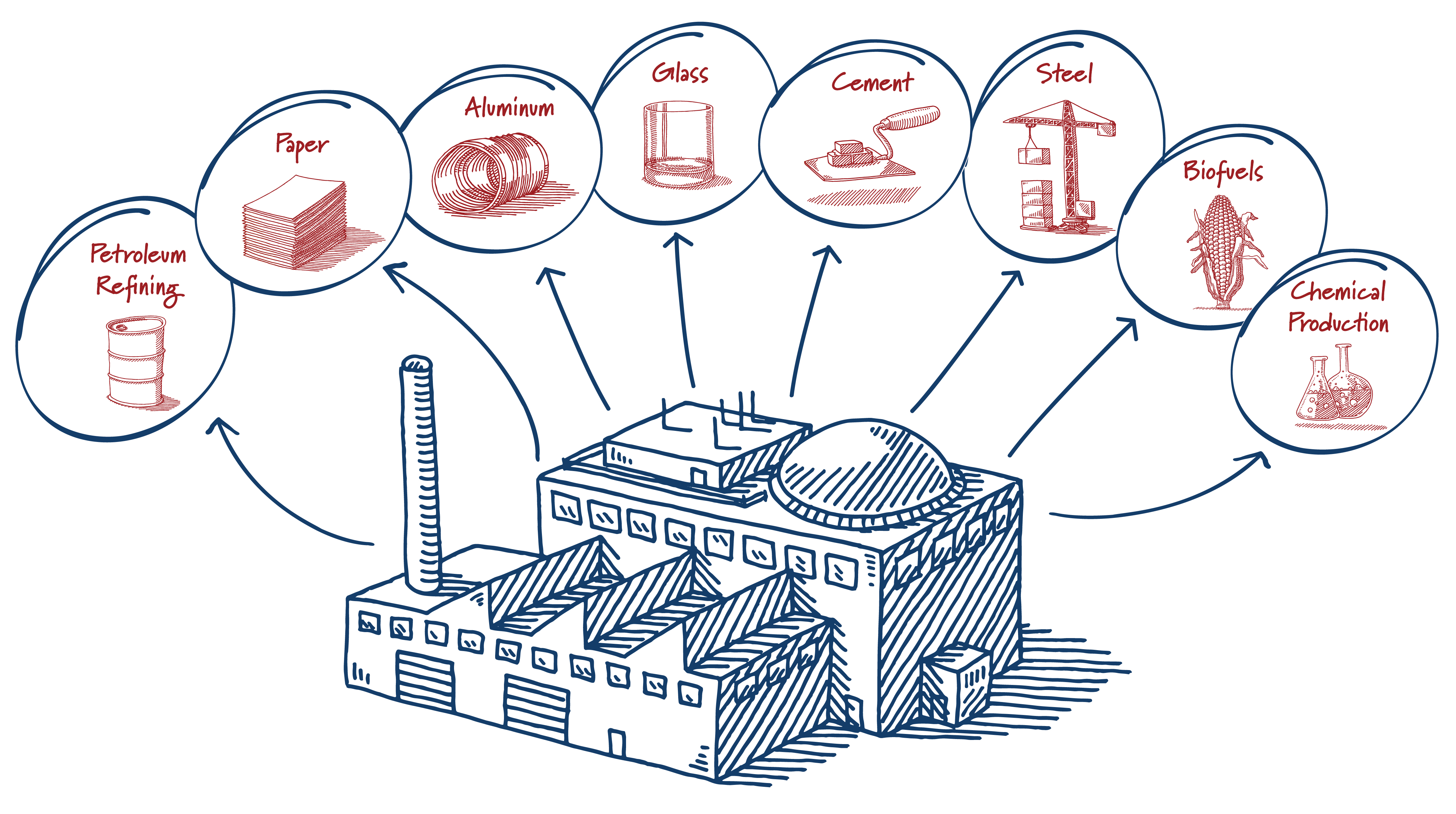 And not only that, but there may also be significant questions surrounding how NSR may stymie or slow carbon capture modifications to industrial facilities, including cement, steel and biofuels production. These industrial emissions are a significant share of total US carbon dioxide emissions (22%), comparable to both the transportation and electricity sectors (28% each).7

Petra Nova8 is a prime example of how NSR can impact carbon capture projects. The first commercial-scale coal power plant with carbon capture had serious NSR concerns. Rather than risk having to face NSR compliance costs, the companies behind Petra Nova – NRG and JX Nippon – paid a steep price to avoid any chance of triggering that requirement. This meant building a stand-alone natural gas-fired system for ~$100 million to provide steam and electricity for the project, rather than directly using the steam from the host power plant.9 Talk about an expensive workaround.

Taking a step back, NSR is a set of guidelines within the Clean Air Act that specifically applies to any modifications or newly-built facilities that may increase pollution within specifically defined areas. The purpose of the program is to maintain and protect air quality while still promoting industrial growth – from power plants to paper mills and refineries.

When is New Source Review triggered? 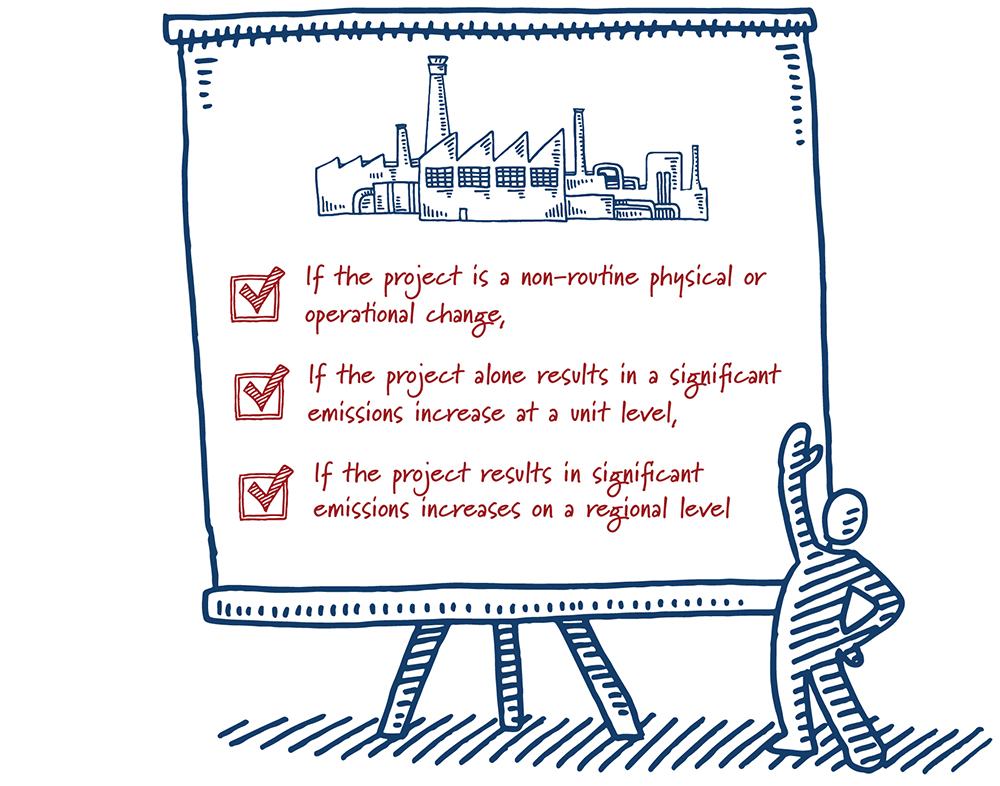 New Source Review’s potential implications for carbon capture projects is unclear because each project has unique characteristics and there is not much precedent. But the potential ramifications are significant and the program deserves a thorough review through a carbon capture lens.

Researchers from Resources for the Future and Indiana University have documented the program’s sometimes perverse incentives (that discouraged efficiency upgrades) and developed sets of recommendations to improve the program.10 These include three main changes: replacing current modeling requirements for one that would more realistically estimate if the upgrade would negatively impact air quality, expanding the emission reduction credits from new or expanded facilities to incentivize upgrades, and the continuation of NSR permitting even when there are changes to the National Ambient Air Quality Standards (NAAQS).11 Yet, administrative and legislative efforts to streamline the program have been unsuccessful.

At ClearPath, we are focused on developing the innovative clean energy technologies needed to economically drive deep carbon emission reductions. Sometimes, having the technology ready is not enough. New Source Review is one regulation that may paradoxically encumber the construction of carbon capture projects. EPA air quality chief Bill Wehrum recently said he wants the “complicated and confusing” NSR program to be “simplified and improved.”12 While the devil is in the details regarding specific changes, we agree that changes are necessary and encourage others to more closely examine how the rule can impact carbon capture deployment.