Combating Climate Change in East Asia and the Pacific

Below is my testimony before the Senate Foreign Relations Subcommittee on East Asia, The Pacific, and International Cybersecurity Policy in a hearing entitled, “Combating Climate Change in East Asia and the Pacific” on July 21, 2021.

Good afternoon Chairman Markey, Ranking Member Romney and Members of the Subcommittee. My name is Rich Powell, and I am the Executive Director of ClearPath.

ClearPath is a 501(c)(3) organization whose mission is to develop and advance policies that accelerate breakthrough innovations that reduce emissions in the energy and industrial sectors. We develop cutting-edge policy solutions on clean energy and industrial innovation, and we collaborate with public and private sector stakeholders on innovations in nuclear energy, carbon capture, hydropower, natural gas, geothermal, energy storage, and heavy industry to enable private-sector deployment of critical technologies. An important note: we are supported by philanthropy, not industry.

Climate change is real and industrial activity around the globe is the dominant contributor to it. I believe the challenge it poses to society merits significant action at every level of government and the private sector. Unfortunately, climate change is best thought of as a chronic condition of the planet, and will require continuous innovation, smart policymaking and voluntary action, and resilience building every decade of this century to address.

I have spent my entire career working on climate change solutions, including my time living in the Asia Pacific region in Indonesia, Malaysia and Singapore, working with energy and resource companies and local governments on their sustainability goals.

Jakarta, Indonesia, which I called home several years ago, is a particularly relevant case study for the need to act, and act thoughtfully, on climate change. The metropolitan region of Jakarta, the capital, is home to more than 33 million people as of 2020, making it the second most populous metropolitan area on Earth after Tokyo. Given the proximity to several low-lying rivers, a rising sea, rapid growth and development, and over-extraction of ground-water, the city is literally sinking and prone to severe flooding. More than 70 percent of the city was submerged during the 2007 monsoon. This year, thousands have already needed to evacuate the city due to flooding, which is part of the reason their government is in the process of moving the capital to a different island.

There is no silver bullet solution for stories like this. Maintaining a thriving megalopolis like Jakarta will require deep investments in resilient infrastructure, stronger urban planning, and better technology to limit and eventually reverse global climate change. Just as importantly, better clean energy solutions are needed to eliminate the urban air pollution which continuously shrouds the city. Meeting all of these challenges, while continuing the rapid development of South East Asia’s largest economy, soon likely to overtake the U.S. as the world’s third most populous nation, will require technological breakthroughs. For one thing, 275 million Indonesians live across 6,000 islands in the world’s most populous archipelago. Population density there is four times as high as in the U.S. The most populous islands like Java are extremely densely settled, and the less inhabited parts of many other islands are home to the largest remaining rainforests in Southeast Asia, a global treasure trove of biodiversity. In short, Indonesia is incredibly rich in people and culture and quite poor in open, available land – ensuring a clean energy future for Indonesia will rely heavily on power-dense clean technologies – advanced nuclear, fossils with carbon capture, hydrogen, and enhanced geothermal – only under development today. Relying entirely on existing high land use variable carbon free energy like wind and solar is entirely unrealistic in Indonesia, as it is for much of the rest of the Asia Pacific region.

To make matters more complicated, Indonesia’s islands are rich in coal. The country is the second largest coal exporter by value on the planet, and its share of power generation from coal continues to grow in both absolute and relative terms (now at roughly 60%) as it rapidly electrifies its economy. Despite the continued cost improvements in wind and solar, countries with high population density and abundant coal looking to rapidly electrify continue to turn to that power source as it remains cheap, abundant and reliable.

The climate challenge for Indonesia is a microcosm of the wider region. Given this subcommittee’s role in America’s response to the global climate challenge and efforts to examine increasing carbon dioxide emissions in China, Southeast Asia and the Pacific, I will discuss three key topics today:

There is good news and there is bad news. The good news, lawmakers — both Republican and Democrats — and businesses across the U.S. are prioritizing investments in climate change solutions.

The bad news: while the U.S. and a few other leaders have reversed our emissions trajectory, much of the rest of the world is growing their emissions as they grow their populations, industries, and quality of life.

That’s why as the Committee considers policies to remain competitive with China, it is important that U.S. energy policy synchronizes with the global nature of the climate challenge. Reducing American emissions is essential, and we have seen a significant decline already. Since U.S. emissions peaked in 2005, power sector emissions have fallen by roughly 40 percent as of 2020, largely due to the abundance of cleaner natural gas and resulting coal to gas power switching, as well as an increase in renewables. But, even if the U.S. somehow eliminated all of its carbon emissions tomorrow, just the growth in carbon emissions from today through 2050 by developing Asian countries (e.g., China, India, and other Eastern Asian nations) would exceed total U.S. emissions today. Going forward, we expect power sector emissions in the United States to flatline if natural gas prices remain low, and more action is required to ensure emissions continue to decrease here at home. 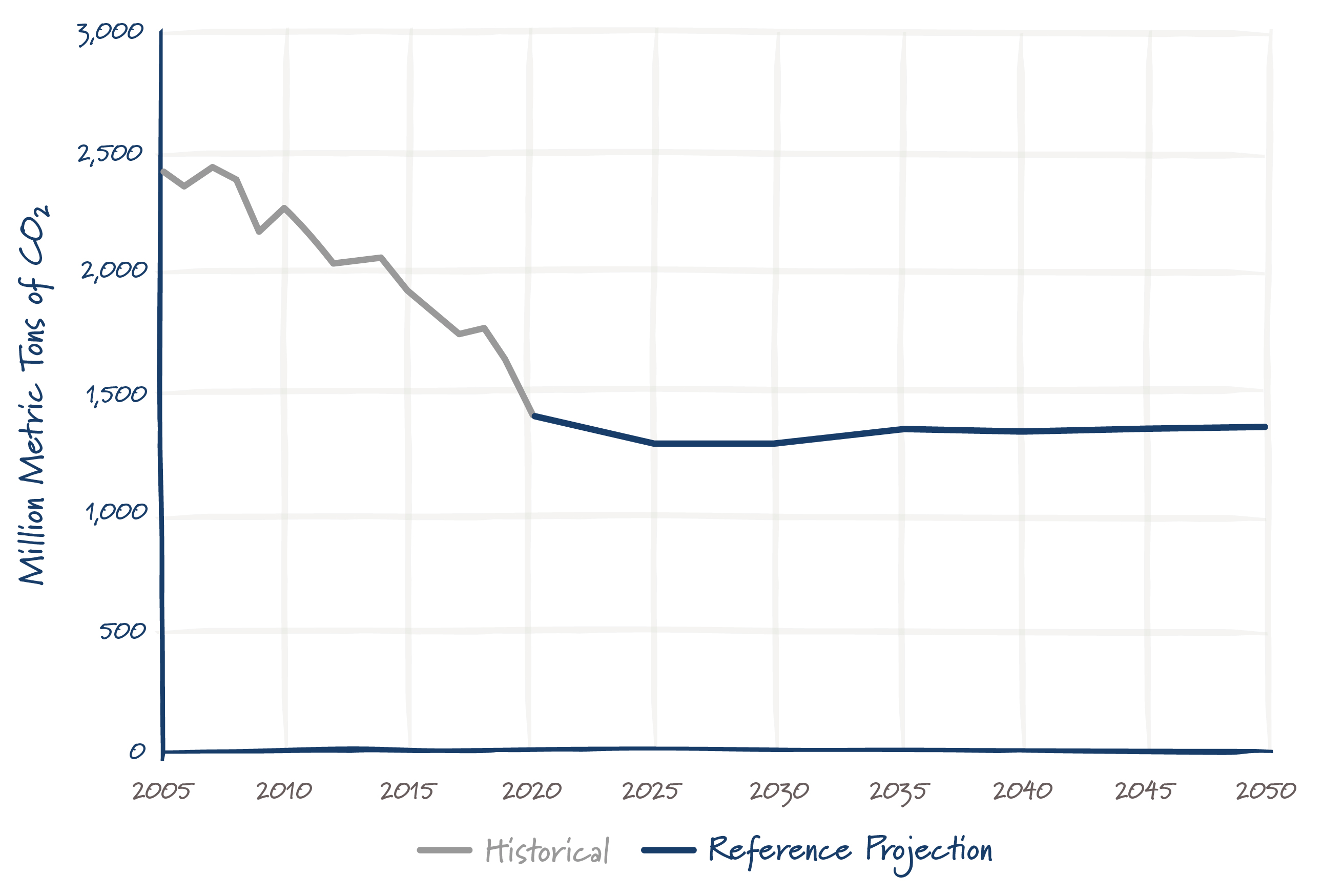 Data based on ClearPath analysis

However, clean technology available today is simply not up to the task of global economy-wide decarbonization. As the chart below indicates, the global supply of clean energy has remained stagnant since 2005. We need to focus on breakthrough technologies that offer both better performance and lower costs than the traditional emitting technologies in the market today – only then should we expect to truly change this trajectory.

China’s Belt and Road Initiative – their commitment to global infrastructure finance and development to tie together a huge swatch of the developing world – is currently hugely outpacing all U.S. America export credit and development finance activity. Among many other things, including clean energy technologies, China continues to finance new sub-critical coal plants — an outdated, extremely high emitting, inefficient but very cheap, coal technology – around the developing world.

We can all agree that China has a big emissions problem. Greenhouse gas emissions in China tripled between 1999 and 2019, and accounted for 27 percent of global emissions in 2019, more than the entire developed world combined. Looking ahead, Chinese coal emissions have not yet peaked, and new coal plants are still under development through 2026, locking in those emissions for decades to come.

The total emissions from Chinese publicly supported coal projects since 2000 is 433 million metric tons of CO₂ per year. If the average life of a coal plant is approximately 40 years, this investment represents 17 gigatons of carbon emissions.

Within the Southeast Asian region generally, China has been a major financier of coal projections. The map below shows Chinese investment in energy projects between 2008 and 2022 in Southeast Asia. In total, Chinese financial entities supported the development of 27 gigawatts of coal capacity in Southeast Asian countries alone.

China’s overseas support is dwarfed by its own domestic development. In 2020, while much of the rest of the world was targeting its covid-related stimulus spending towards clean technologies, China brought 38 gigawatts of coal online, more than three times as much coal as was brought online in the rest of the world combined.

While China may technically lead the world in solar and wind capacity additions (which may not be entirely accurate), because those plants operate at only a fraction of coal’s capacity factor, actual renewable energy generation is dwarfed by fossil energy generation.

Too often these sobering statistics on the rise of emissions in the rapidly developing world have been used to argue against rigorous American action to combat global climate change. We argue just the opposite – rather than a shield against action, these realities must spur us to great ambition. But unless we keep these realities in mind, we risk pursuing a climate change and clean energy policy that will do more harm than good.

To address a massive global challenge like climate change, every tool must remain in the box. No country will use a single clean power technology – every country will need to find the right mix given its national circumstances, resource endowments, and pre-existing industry.

Finally, I cannot underscore this enough, partisan only climate policy is not sustainable. It results in short-term uncertainty and does not provide the market signals we need to move to a clean energy economy. We must work to have sustainable climate policy that includes the buy-in from both political parties in congress.

We can start by building on recent bipartisan support for all these exciting opportunities for more clean energy innovation. In addition to the bipartisan authorizations in the Energy Act of 2020, the most recent FY20 & 21 appropriations bills are great successes, and I applaud the critical programmatic direction and eagle-eyed investments in enhanced geothermal, advanced nuclear, carbon capture, grid-scale storage and other clean energy technologies included.

With these efforts, Congress sent an undeniable message that lawmakers are serious about keeping the U.S. in the top tier of countries pursuing clean and reliable energy breakthroughs. While steady and sufficient funding is essential, providing important direction and reforms to the DOE to make sure that dollars are well spent is equally as vital to spurring clean energy innovation.

Making investments in these programs will greatly accelerate clean energy innovation in America which will turn into market opportunities with rapidly growing nations. We are very much looking forward to continuing that strong momentum.

Again, we must think globally when approaching this challenge. Partisan regulations will not pass the political sustainability test needed for climate solutions. Likewise, halting pipelines or placing moratoriums on oil and gas drilling on federal lands also has little to no impact on actual carbon dioxide emissions in the U.S., let alone the rest of the world – particularly if we are simultaneously pushing OPEC+ for expanded oil and gas production globally. And none of that will make us more competitive with China. We agree, the cost of inaction on climate is high, and finding bipartisan common ground on clean energy innovation policy is priceless.

Thank you again for the opportunity to provide remarks. ClearPath is eager to assist the Committee in developing innovative policies and understanding the emission threats from East Asia and the Pacific. We applaud the Committee for taking on this important task to help ensure America’s energy innovation leadership is upheld by bringing more cutting-edge energy technologies to market in the service of a stable global climate.