A “Reversible Rust” Battery That Could Transform Energy Storage

As power sector decarbonization accelerates, energy storage has emerged as an essential technology to maximize grid reliability and integrate renewable energy. Though pumped storage hydropower is by far the largest source of energy storage today, and lithium-ion batteries are the fastest growing storage technology, innovators are developing new, advanced battery chemistries to meet the needs of an evolving electric grid. A Massachusetts-based company called Form Energy recently unveiled the details of its much anticipated, multi-day energy storage system, a technology that’s been known for decades but never truly commercialized: iron-air batteries.

Grid reliability is essential to modern life. Maintaining a reliable electric grid requires having enough electricity available every second of every day. As the U.S. deploys more variable sources like wind and solar, grid operators face the challenge of maintaining 24/7 power. Energy storage allows the grid to save energy for when we need it most, such as when severe weather events shut down a power plant. With storage, we can also save excess solar power generated during the day and use it at night, when the sun isn’t shining.

Among energy storage technologies, lithium-ion batteries are the fastest growing. These are the same batteries used in smartphones, laptops and electric vehicles. Lithium-ion batteries have benefited from steady R&D funding for decades, culminating in a Nobel Prize in Chemistry for Department of Energy-funded researchers in 2019. As a result, lithium-ion battery costs have declined 90 percent over the last decade, which is driving deployment of electric vehicles and grid-scale battery storage, the latter increasingly paired with utility-scale wind or solar.

Despite impressive advances in energy storage technologies, more innovation is needed for cost-effective grid scale storage that can deliver energy cheaply for long periods of time. Lithium-ion batteries work best for shorter term storage, such as regulating grid frequency on the order of minutes, or providing up to a few hours of power. For perspective, powering an entire city like Minneapolis during a four-day storm would require the energy of 600,000 lithium-ion electric vehicle batteries, which would be cost prohibitive. This is why long-duration energy storage is a potentially transformative technology: to store vast amounts of electricity, like during extended storms, the U.S. will need new technologies capable of storing electricity for multiple days at low cost.

In 2018, Form Energy received more than $3.7 million in funding from the U.S. Department of Energy’s (DOE) Advanced Research Projects Agency – Energy (ARPA-E). The project was awarded under ARPA-E’s long-duration energy storage program, known as DAYS. Form’s award under DAYS focused on developing an aqueous sulfur battery system. After conducting a broad review of available technologies, Form pivoted to something truly different from the vast majority of other battery storage technologies: a rechargeable iron-air battery.

Like lithium-ion, iron-air batteries have been around for decades. But while lithium-ion batteries benefited from decades of public and private funding, research on iron-air batteries was largely abandoned in the 1970s. Form believes this overlooked technology has not only the lowest fundamental cost of known battery chemistries, but will be the best long-duration grid scale solution due to its safety, durability, and global abundance.

Inside the Form Battery

Form’s technology amounts to a reinvention of the iron-air battery, optimized for multi-day energy storage. It works as a “reversible rust battery,” which means that while discharging, the battery breathes in oxygen from the air and converts metallic iron to rust. While charging, with the application of an electrical current, the battery converts “rust” back into metallic iron and breathes out oxygen.

Here’s a deeper look at the battery cycle. On discharge, the air-breathing electrode allows oxygen to pass from the air to the electrolyte, turning it into a hydroxide ion, which reacts with the iron anode. This turns the coating of the metal into rust (iron oxide). Then to recharge, the air electrode consumes hydroxide ions to form fizzy oxygen bubbles on charge, when the direction is reversed. Then the rust is converted back to iron metal. 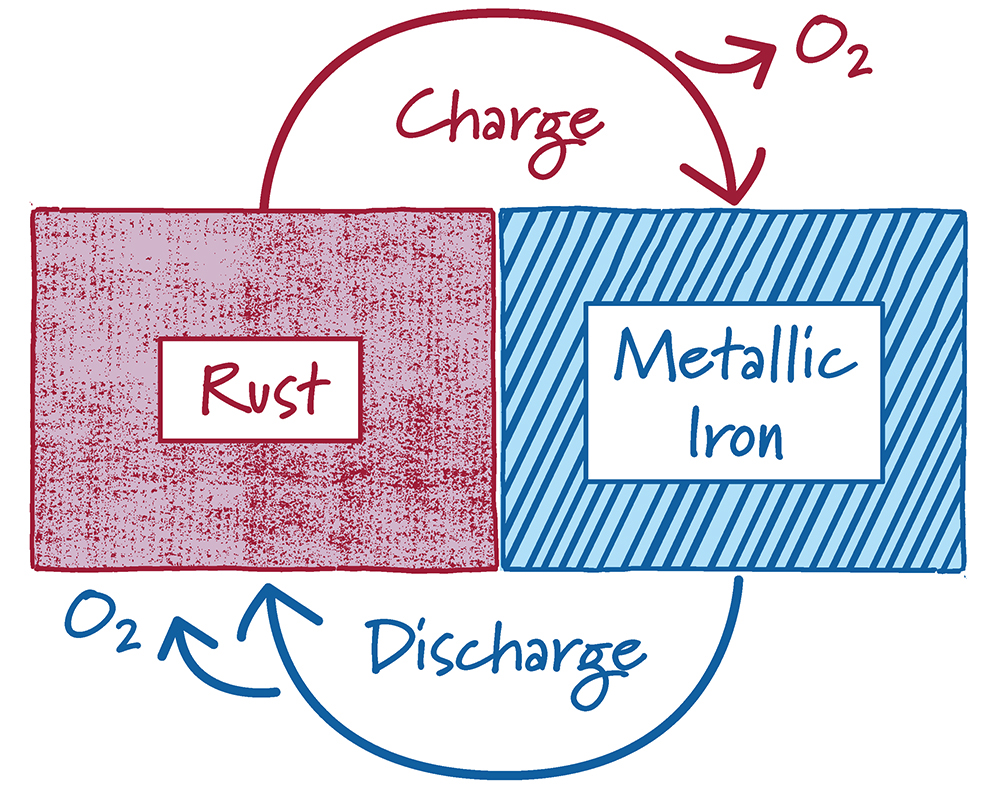 Each iron-air battery is filled with a water-based, non-flammable electrolyte like those used in AA batteries. Inside the battery are stacks of anywhere between 10 and 20 cells, which include iron electrodes, the liquid electrolyte, and air electrodes – the parts of the battery that conduct and carry electricity on charge and discharge. The battery is a technological breakthrough: the iron electrode is the largest battery anode ever made, and one cell delivers about as much energy as a Chevy Volt battery pack at lower cost.

Each individual battery module is about the size of a washing machine. These battery modules will be grouped together in megawatt-scale power blocks, which will comprise thousands of battery modules in an enclosure for environmental protection. Depending on the system size, tens to hundreds of these power blocks will be connected to the electricity grid. Form says the battery systems can be sited anywhere, even in urban areas, to meet energy storage demand at grid scale.

Thanks to decades of research and innovation, lithium-ion battery costs have declined dramatically, which has driven significant deployment in the transportation and power sectors. However, lithium-ion batteries work best for shorter term storage. As the U.S. deploys more variable renewables, we will need cost-effective technologies capable of storing and discharging vast amounts of electricity over several hours to multiple days, like during extended storms and periods of low wind or solar output.

Form Energy’s batteries offer unique advantages for grid reliability, energy security, and environmental stewardship. Two of the major advantages of iron-air batteries are stable supply chains and end-of-life management. Lithium-ion batteries depend on critical minerals whose supply chains are dominated by China. Moreover, the U.S. currently recycles less than five percent of lithium-ion batteries, with the rest piling up in landfills.

By contrast, Form’s iron-air battery chemistry uses one of the most abundant minerals on Earth, iron, and is easily recyclable. While innovators are developing new ways to source critical minerals domestically and establish battery recycling supply chains, Form Energy’s batteries avoid many of those issues entirely, which is a win-win for U.S. energy security and the environment.

Form Energy has received support from both DOE and private investors to develop and scale its technology. Since its first DOE award in 2018, Form has made significant progress toward commercialization. In 2019, Form demonstrated key iron-air cell performance proof points at lab scale. The company has also conducted large-format testing at its 50,000 ft2 R&D center in Somerville, MA. In 2020, Form announced a partnership with Great River Energy to build a 1 MW battery pilot project in Cambridge, Minnesota, which Form expects to complete in 2023. Form expects to offer larger commercial scale systems in 2024.

Federal policymakers should strive to maintain the momentum. By investing in demonstration and commercialization, we can accelerate the deployment of next-generation energy storage technologies that can be made in America and exported around the world.