A Grand Opportunity for Energy Storage

Innovation is driving rapid transformation in America’s energy system. Ten years ago, almost no one predicted the U.S. would be the top producer of oil and natural gas in the world, eclipsing Saudi Arabia and Russia. Similarly, few people predicted the cost of wind and solar would decline so rapidly, with utility-scale solar costs dropping 82% since 2010. As a result of these dramatic changes, the U.S. leads the world in reducing energy-related carbon dioxide emissions while exporting our energy resources around the globe.

For the U.S. to continue to demonstrate energy and climate leadership, however, more innovation is needed to ensure the reliable integration of renewables into an evolving electric grid. After all, wind and solar are variable resources whose availability depends on the weather, which poses challenges to grid operators who must carefully balance supply and demand every minute of every day to keep the lights on.

But what if we could develop technologies to cost-effectively store excess wind and solar generation and save it for later, thereby making renewables more flexible, on-demand resources? And what if the U.S. could lead the world in the manufacture and export of those technologies?

The U.S. Department of Energy (DOE) has been working to address these questions, with bipartisan support from Congress, and we hope that continues.

In January 2020, DOE launched the Energy Storage Grand Challenge (ESGC), a comprehensive program to accelerate the development, commercialization, and utilization of next-generation energy storage technologies and sustain American global leadership in energy storage. DOE invests about $400 million per year in energy storage-related research, development, and demonstration (RD&D), yet the Department has never had a complex-wide energy storage strategy—until now.

Working under then-Energy Secretary Dan Brouillette’s direction, I had the honor of co-chairing an internal working group to develop the Department’s first-ever comprehensive energy storage strategy. After the Secretary launched the ESGC, our working group organized a series of virtual stakeholder meetings throughout the Spring and issued a Draft Roadmap for public comment in July. That work culminated in the Energy Storage Grand Challenge Roadmap, which DOE finalized and published in December 2020.

The DOE Roadmap focuses resources from across the Department to accelerate energy storage innovation in pursuit of three central goals: “Innovate Here, Make Here, Deploy Everywhere.” These goals are consistent with the BEST Act (Better Energy Storage Technology Act), which was introduced by Congress with bipartisan support in 2019 and was passed and signed into law as part of the Energy Act of 2020 last month. The ESGC and BEST Act goals provide a framework to bolster American competitiveness by ensuring the technological innovations invented in America can be manufactured domestically and exported around the world:

From Lab to Market

R&D is necessary but not sufficient for the U.S. to be the world leader in the energy storage technologies of the future. Beyond basic and applied R&D, the ESGC Roadmap focuses on accelerating the transition of new technologies from the lab to the market, developing ways to enable cost-effective domestic manufacturing, and ensuring secure and reliable supply chains that do not depend on foreign sources of critical minerals. In that spirit, the ESGC Roadmap sets an ambitious topline objective: develop and domestically manufacture energy storage technologies that can meet all U.S. market demands by 2030. To achieve this objective, the Roadmap includes tangible performance targets, including:

Getting Beyond Lithium Ion

DOE is investing in a portfolio of technologies to achieve the above performance targets by 2030. Among storage technologies, lithium-ion batteries often grab the most headlines. Indeed, DOE has steadily funded lithium-ion R&D for decades, culminating in a Nobel Prize in Chemistry for DOE-funded researchers in 2019. As a result, lithium-ion battery costs have declined 90% over the last decade, which is driving deployment of electric vehicles and grid-scale battery storage, the latter increasingly paired with utility-scale wind or solar. Yet like any technology, today’s lithium-ion batteries have their drawbacks, such as dependence on critical minerals like cobalt, whose supply chain is dominated by China. Read more in this ClearPath Tech 101: Supply Chain for Lithium and Critical Minerals Is … Critical.

The transportation sector is the major demand driver for lithium-ion batteries, but integrating large amounts of renewables in the power sector will require new technologies for long-duration, grid-scale energy storage applications too. That is why we need to support a wide range of technologies, including advanced batteries, thermal and chemical storage, and flexible generation and load. Go deeper with this ClearPath Tech 101: Intro to Storage. 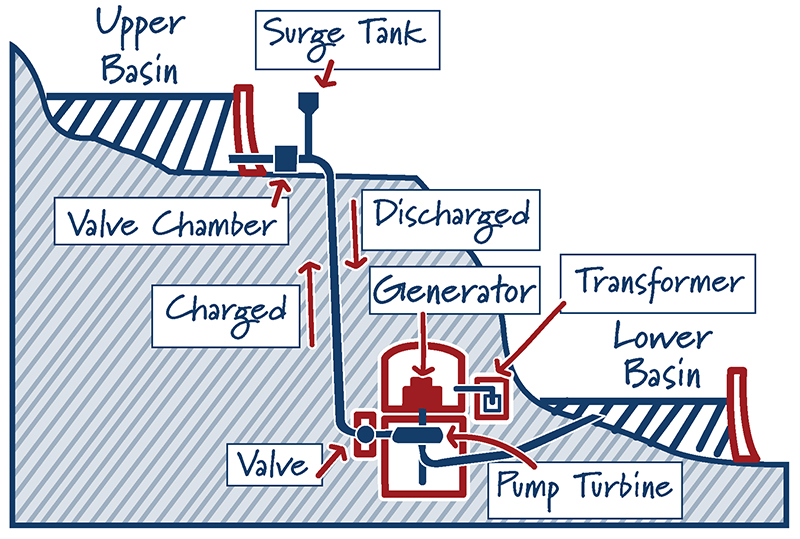 The most prominent example of long-duration, grid-scale storage is pumped storage hydro (PSH), classified as electromechanical storage in the chart above. At more than 21 GW of installed capacity, PSH is by far the largest source of energy storage on the grid today, accounting for 95% of installed storage capacity. As shown above, PSH has many important attributes, including load response over a range of durations and black start capability. Quidnet is a pumped-storage startup who we have been tracking closely. Watch our video about Quidnet’s technology here.

DOE is working to enhance the flexibility of America’s substantial PSH resources to support the integration of variable renewables. In 2018, the Office of Energy Efficiency and Renewable Energy’s (EERE) Water Power Technologies Office (WPTO) launched the HydroWIRES Initiative. The goal of HydroWIRES is to maximize the value and enhance the flexibility of hydropower and PSH to contribute to grid reliability and the integration of variable renewables. As DOE explains, “While WPTO has historically focused on technology solutions to drive down the cost of hydropower development and support the expansion of the sector, HydroWIRES adds a complementary focus on hydropower’s role as an integrator of variable renewables.”

Other parts of DOE are also focused on developing long-duration, grid-scale storage that goes beyond lithium-ion. The ARPA-E DAYS (Duration Addition to electricitY Storage) program, established in 2018, focuses on developing grid-scale storage technologies at durations of 10 to 100 hours, much longer than the 4 to 6 hour durations of most lithium-ion systems. Projects funded under DAYS include Quidnet’s pumped storage hydro technology, University of Tennessee’s reversible fuel cells, and Form Energy’s aqueous sulfur flow batteries. Advanced grid-scale battery systems, including flow batteries, have the potential to be larger scale (over 1 MW) and longer duration (days or weeks) than lithium-ion battery systems.

DOE’s Office of Energy Efficiency and Renewable Energy’s Advanced Manufacturing Office and Vehicle Technologies Office have ramped up investments in battery supply chain and manufacturing technologies. In 2019, DOE launched the Battery Recycling Prize, a series of competitions to develop and demonstrate processes that, when scaled, have the potential to cost-effectively capture 90% of spent batteries in the U.S. for eventual recycling. In December 2020, DOE announced seven Phase II winners, who each received more than $350,000 in funding and will now compete in the third and final phase, pilot validation, worth up to $1 million. Separately, in 2020, EERE funded a Battery Manufacturing Lab Call, which established public-private partnerships to accelerate battery manufacturing by providing resources for private sector battery developers to de-risk and scale their technologies at DOE National Lab user facilities.

Other foundational investments under the ESGC include the Office of Electricity’s Grid Storage Launchpad (GSL). With an official groundbreaking at the Pacific Northwest National Laboratory (PNNL) in August 2020, the $75 million GSL will serve as a resource hub to develop, prototype, and test emerging grid-scale battery chemistries, including zinc manganese and sodium-based batteries. Other storage-related user facilities within the DOE National Lab complex include the Joint Center for Energy Storage Research (JCESR) at Argonne National Lab and the Battery Manufacturing Facility at Oak Ridge National Lab. Under the ESGC, DOE’s user facilities provide foundational support to the private sector through testing, verification, and demonstration to help de-risk and accelerate commercial adoption of new technologies.

The Destination for the Roadmap

Now that DOE has finalized the Energy Storage Grand Challenge Roadmap, the tough job of doing the work begins. The Roadmap provides clear goals for DOE to pursue in the coming years, providing new opportunities for entrepreneurs to demonstrate and scale their innovative technologies. Armed with the DOE Roadmap, and buoyed by strong bipartisan support for storage in the Energy Act of 2020, American innovators are well positioned to lead the world in the development of next-generation energy storage technologies. The opportunity to “innovate here, make here, and deploy everywhere” is America’s to seize.