Carbon Capture Technology Is Not Just for Coal and Gas

Of the many types of greenhouse gases released into the atmosphere, carbon dioxide (CO2) is perhaps the most important. A molecule released today can stay in the air for hundreds of years. And we make a lot of it: people release more than 1,000 tons of CO2 into the air every second. 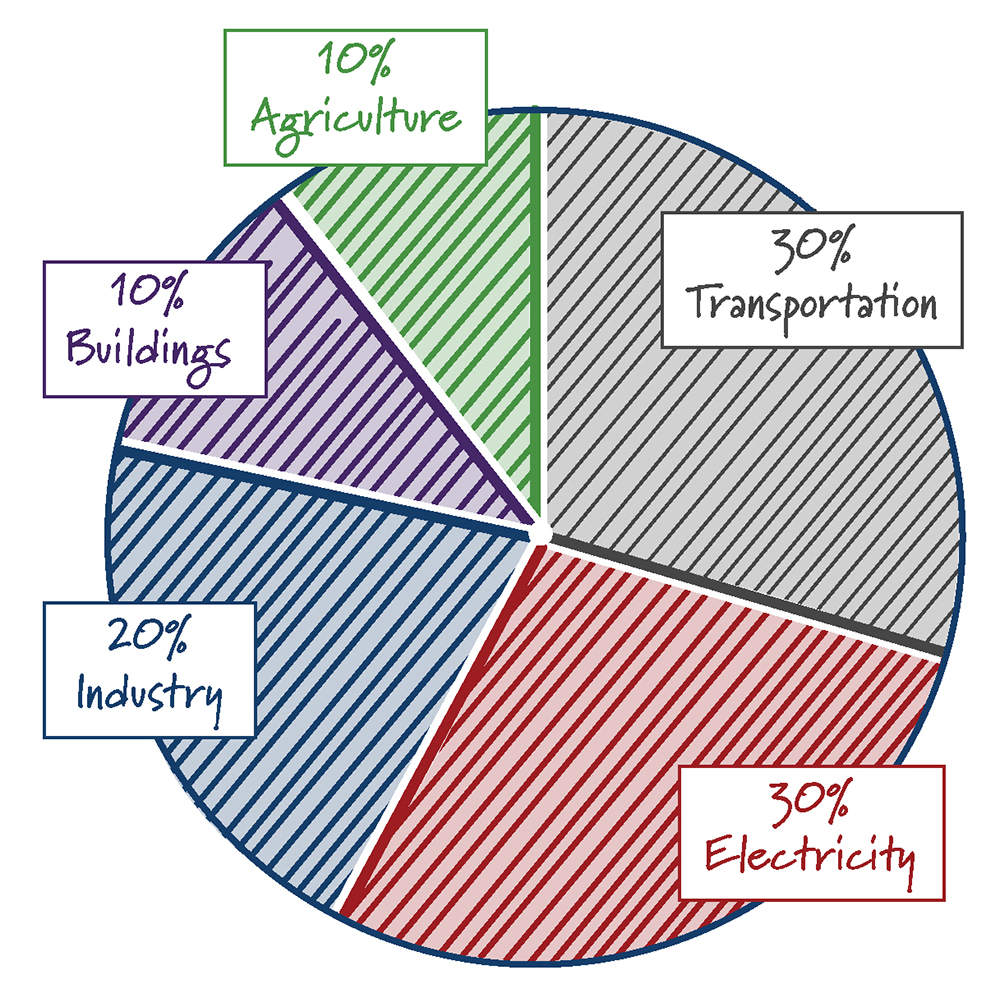 In the United States, CO2 emissions fall into one of five main sectors: electricity, transportation, industry, buildings and agriculture. If you combine the emissions coming from just the electricity and industry sectors — we’re talking about half of all CO2 emissions in the U.S. Wouldn’t it be nice if we could kill two birds with one stone — or in this case two major sectors’ emissions, with one technology.

For the first time in more than a decade, the U.S. Department of Energy (DOE) awarded significant funding to seven cost-shared projects to kickstart commercial industrial carbon capture. This is an exciting development as it’s DOE’s first incursion into industrial carbon capture since the Industrial Carbon Capture and Storage (ICCS) program that funded a Louisiana clean hydrogen project and Illinois ethanol plant with carbon capture in the late 2000s. The emphasis on industrial carbon capture is critical because industrial greenhouse gas emissions account for 22% of overall economic sector emissions in the U.S. The DOE awarded these projects – which focus on industrial activities ranging from cement manufacturing to steelmaking – more than $33 million. Though carbon capture technology traditionally has been applied in the power sector, scientists and engineers are finding the technology can be adapted in more ways than one. For those keeping an eye on up and coming clean energy technologies, this is it.

Carbon capture is versatile in that it can be used on different types of emitters to capture CO2. Historically, the power sector has been the main target of carbon capture research; however, with the evolution of carbon capture technology, other sectors are being explored. This round of DOE funding is particularly nuanced as the projects they chose are more technical as opposed to pure and simple CO2 capture. The awards include support for applied industrial carbon capture projects, such as pilots and pre-commercial engineering studies at sites across the country. Carbon capture is no longer a basement lab science experiment tested in a controlled setting, it has been tested and is now being scaled for industrial and commercial uses. These financial awards are exciting because they will give researchers more insight into the practical applications of carbon dioxide and the ability to truly understand the real-time possibilities and challenges of it.

Notable projects that were awarded funding fall under industrial carbon capture. DOE granted Chicago-based ArcelorMittal USA, the top steel producer in the world, approximately $1.5 million to research industrial-scale solutions capable of capturing 50 to 70 percent of CO2 from their blast furnace-based steelmaking operations plant in Burns Harbor, Indiana. Another project is aiming to capture 2 million tonnes of CO2 annually from a cement kiln and a natural gas-fired steam generator at Lafarge Holcim’s cement production site in Florence, Colorado. Finally, a company based in Danbury, Connecticut is also completing an initial engineering design study for Linde-BASF to capture CO2 at a commercial hydrogen manufacturing facility in Convent, Louisiana. This facility is targeting a minimum of 90 percent CO2 return from flue gas streams generated by the hydrogen production process. 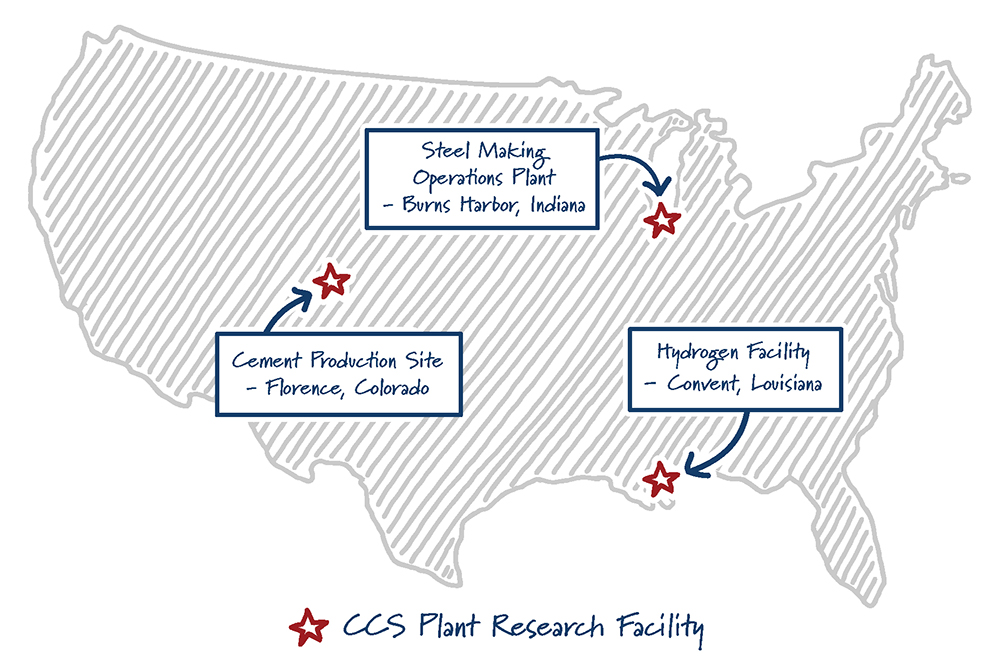 If these projects deliver on their promises, paired with public-private partnerships and financial incentives such as the 45Q tax credit, the commercial applications are endless. Their commercialization could provide immense opportunities to create good-paying American jobs and improve American manufacturing competitiveness while reducing emissions.

A recent study by the Rhodium Group found that with the associated capture retrofits, permanent extension of the 45Q tax credit could create up to 61,800 job-years through 2035 and reduce CO2 emissions by 1.9-2.5 billion metric tons cumulatively through 2050. It is important to note that this type of extension of the 45Q incentive has bipartisan momentum in Congress: House Democrats passed a two-year extension as part of their highway bill proposal the Moving Forward Act (H.R.2) while Republican Ways and Means Committee members Reps. Schweikert (R-AZ) and Wenstrup (R-OH), backed by Minority Leader Kevin McCarthy, introduced a permanent extension of the incentive (H.R. 5883). In terms of reducing global emissions, the low hanging fruit of carbon reductions through purchasing carbon offsets and replacing all lighting with LED bulbs are no longer going to make the cut. If we are truly going to mitigate emissions while simultaneously combatting a global pandemic, we have to start thinking outside the box in developing and implementing more impactful technological solutions. The International Energy Agency (IEA) recently published findings that stated a worldwide effort is needed to address emission goals, “particularly in order to reduce carbon emissions from areas beyond the power sector such as transport, buildings and industry”.

When first introduced, carbon capture was met with scrutiny and skepticism surrounding cost, effectiveness, and concern from environmentalists suggesting this technology would only clear the way for coal and natural gas to keep emitting. This is why the DOE’s support in industrial carbon capture projects is turning heads. The kicker? This technology is not new – the idea was first introduced in 1977. This is why the DOE backing this research through financial awards for R&D is swaying skeptics, garnering attention, and, to many, validating the technology. Though this is not the first time the DOE has financed carbon capture projects, it is noteworthy due to the large amount of funding that has been granted and the diversity of the projects supported.

If carbon capture technology continues to flourish and become viable for both the power and industrial sectors, it will result in more than just emissions reductions. Carbon capture has the potential to create jobs and advancements in technology, allowing the world to once again shine a light on the U.S. as a pioneer.