Technology innovation is America’s specialty. It’s what maintains our international leadership and competitive edge and what will ensure our nation’s future success. Half of all economic growth in the U.S. since WWII can be linked to technological innovation.1 Energy technology is one of the largest areas of U.S. innovation. Energy research and development (R&D) conducted by national laboratories, universities and businesses has allowed the U.S. to develop such varied technologies such as unconventional gas extraction, highly-efficient engines, lithium ion batteries, natural gas turbines, solar technology and nuclear power.

In addition to inventing entirely new methods of utilizing and controlling energy, R&D allows us to continue to make energy cheaper and more reliable for consumers, while giving American businesses an advantage.

The Role for Government in Energy R&D

Ever since the development of the atom bomb, the U.S. government has played a large role in energy R&D. Science and R&D at the Department of Energy since the 1970s have resulted in breakthroughs in renewable energy, supercomputing, particle accelerators and even the human genome.2

The U.S. invests heavily in basic research in all technical fields of study for the public good – including physics, mathematics, biology and health. But the government also invests in much later stage technology in some areas of R&D, such as in energy and space. The reason the U.S. government has played such a large role in energy in particular is that R&D is most warranted in areas where the private sector is underinvesting. While industries such as pharmaceuticals and computing have a clear short-term interest in significantly improving their products, innovation in industries like energy has high capital cost, a very long timeline for impact and doesn’t always result in return for companies (environmental and other improvements). As a result, energy companies invest much less on R&D than other technology-focused fields (see below). 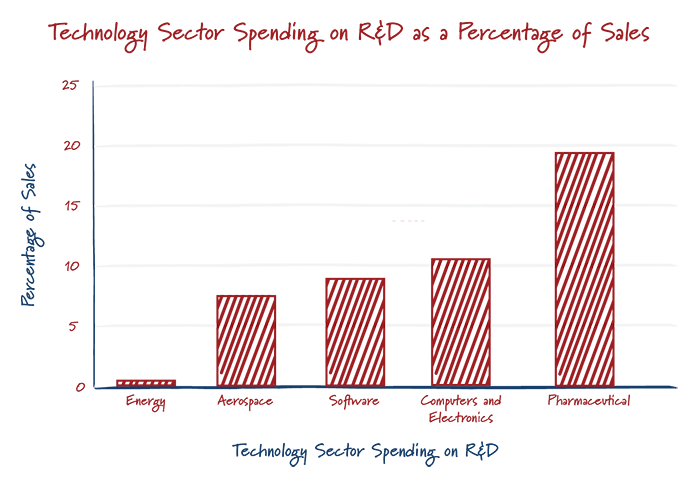 For this reason there is a role for government to support energy R&D, as long as there is a clear need unfilled by the private sector and investments in R&D can be swiftly transferred to benefit Americans.

America’s Current Investment in Energy E&D
The United States first began investing heavily in energy R&D following the conclusion of World War II in order to utilize nuclear fission for peaceful purposes. Energy R&D greatly increased in the mid-1970s in response to the global oil crisis. However, energy’s profile in total U.S. R&D since the 1970s has greatly decreased from its peak of 12% to its current level of just below 2%. 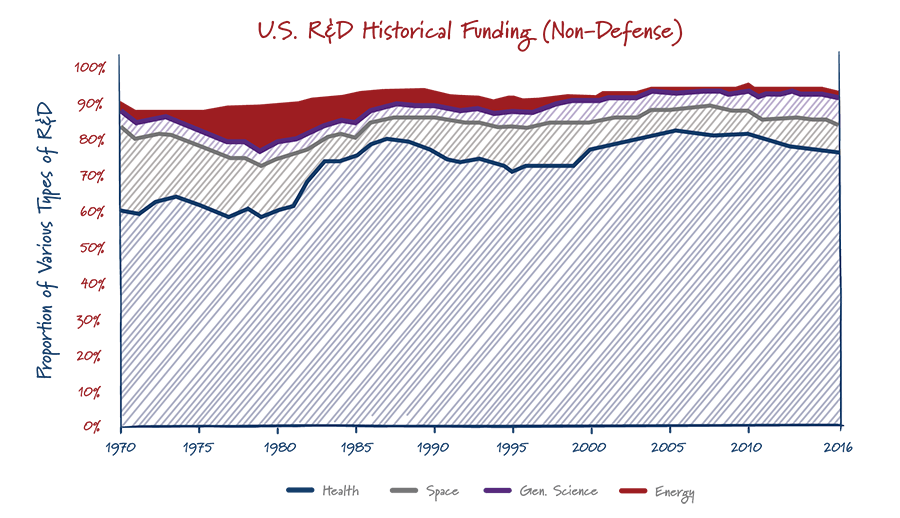 While countries like China are rapidly accelerating the pace of energy research, we haven’t kept up.4 With 25% less funding for energy research than in the 1990’s we’re now ranked 12th internationally for energy research.5  A recent report from Boston Consulting Group found that China will likely outpace the United States on applied R&D (including energy) by 2018.6 It is likely that China will overtake the United States in overall R&D funding in the mid 2020s, putting our future leadership in technology into question.7 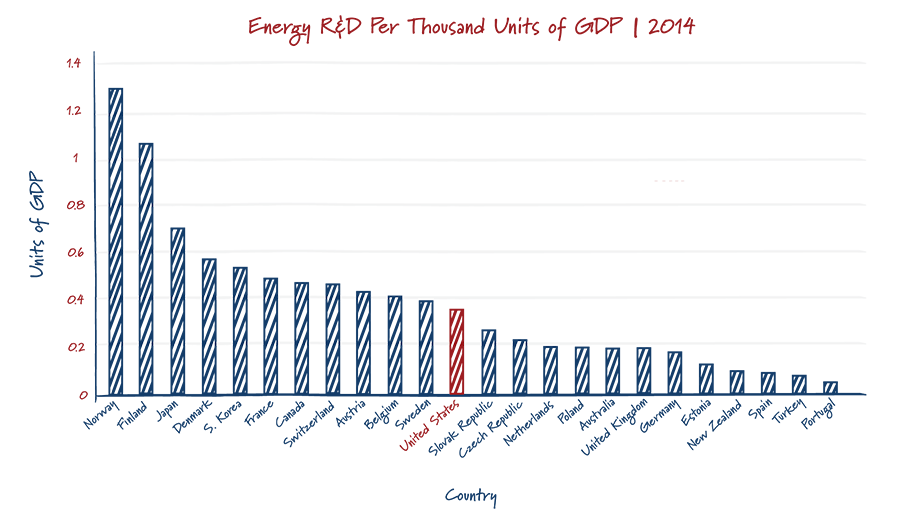 Where does our science and energy R&D funding go?
The Department of Energy sponsors a wide variety of research, including at universities and private companies. The DOE primarily funds research at the nation’s 17 national labs but a large portion of its funding is ultimately given as grants to research institutions across the country. 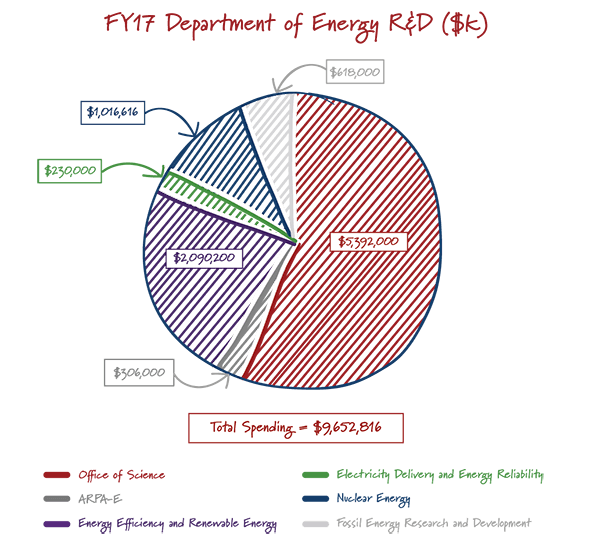