Geothermal energy is a highly promising and reliable zero-emission technology. Besides critical investments in R&D, the biggest hindrances to geothermal development are permitting and other regulatory barriers that are more stringent than for oil and gas. Moving towards centralized permitting and more pragmatic environmental reviews could lead to a 500% increase in geothermal capacity using existing technology and up to 100 gigawatts (GW) (an increase of 3700%) with new enhanced geothermal technology.

Geothermal energy is both the most reliable renewable energy source and the most overlooked. It operates at a capacity factor of 77%1, but only contributes 0.4% of U.S. electricity2, partially due to both the location of the most accessible deposits and regulatory barriers to development.

Geothermal Could Be Cost Effective Across the U.S. with New Enhanced Geothermal Systems (EGS) 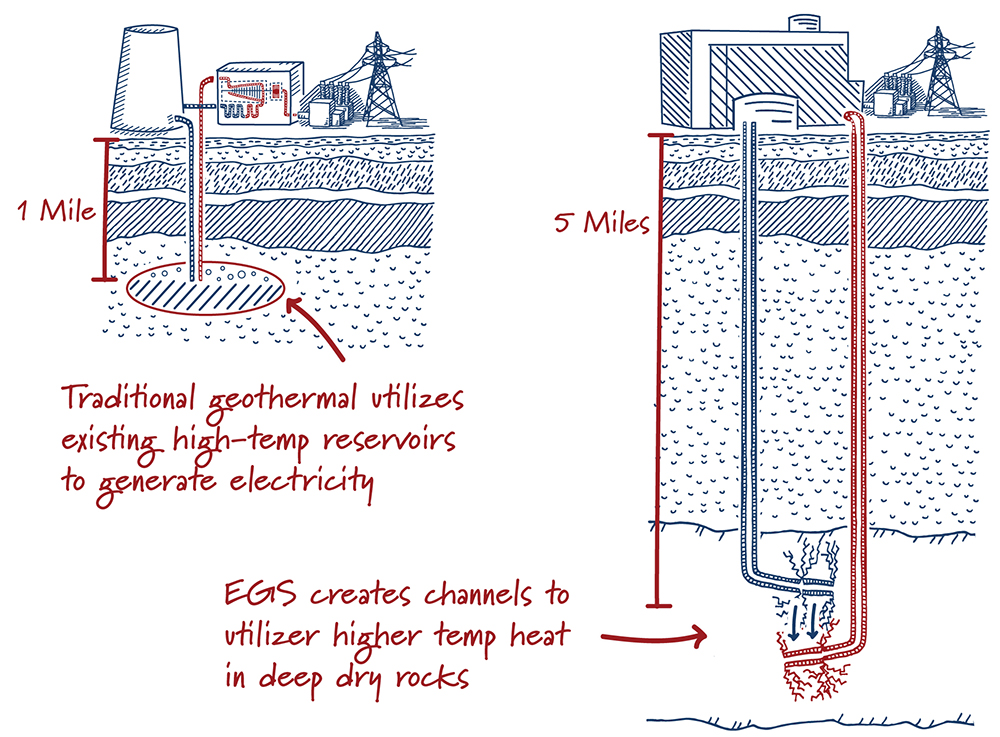 With additional R&D and regulatory reform, geothermal has the potential to make up a much larger supply of the U.S. energy mix. The advent of hydraulic fracturing has created positive spillover effects in the geothermal industry. With advanced sensing technologies and horizontal drilling techniques, advanced geothermal systems at depths of up to 5 miles underground are now within reach. At deeper depths and higher temperatures, geothermal can be deployed anywhere in the country. The Department of Energy estimates up to 100 GW of economically viable advanced geothermal by 20503, which is enough to provide 20% of total U.S. electricity.

90% of geothermal potential in the United States using today’s technology is on public lands managed by the Bureau of Land Management (BLM). Consequently, 90% of geothermal resources are greatly limited by federal regulatory barriers, even though these resources will also be the cheapest locations to deploy initial advanced geothermal systems. Any geothermal energy exploration or development must go through a comprehensive environmental assessment (EA) under the National Environmental Policy Act (NEPA).

Research from the National Renewable Energy Laboratory (NREL) estimates that each final geothermal well on public land ends up invoking NEPA up to six times (with each EA taking 10 months), resulting in an average development timeline of eight years. Timelines on public lands are further constrained by the lack of a centralized permitting office at BLM, leading to duplicative environmental and regulatory assessments among local offices.

Oil and gas development on public lands does not face the same development challenges as geothermal because a variety of Department of the Interior Categorical Exclusions (CX) to NEPA were passed as part of the Energy Policy Act of 2005.4 Furthermore, oil and gas (as well as solar and wind) have their own central permitting office at BLM that is well-versed in expediting requests for energy development.

NREL estimates that a combination of expanding CXs for geothermal exploration and centralized federal and state permitting would ultimately cut the total development timeline for geothermal in half and allow an additional 7 GW of development by 2050, a 116% increase over business as usual in 2050.5 Future developments in enhanced geothermal technology could accelerate that figure even further. 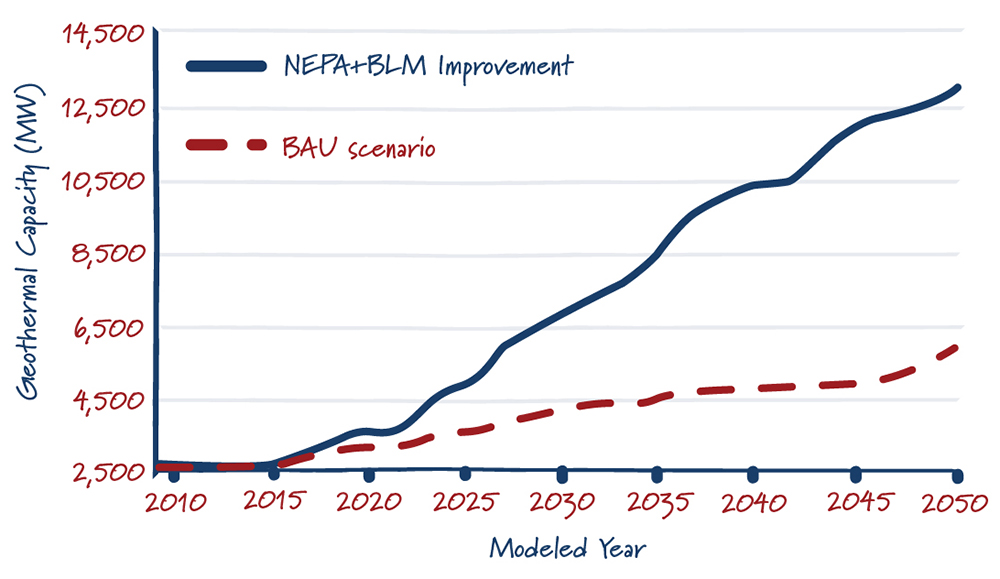