In 2019, nuclear energy supplied 20% of all U.S. electricity and 55% of our clean power, more than two times as much as wind and solar combined.1 All U.S. nuclear power plants currently operate by splitting atoms in a process called nuclear fission. This produces heat, which boils water into steam that spins a turbine to generate electricity. Because nothing is burned, there are no emissions. Nuclear energy development peaked in the 1970s and 1980s, and most of our current reactors began in those two decades.2 Increased regulation and opposition from environmental groups and their allies have contributed to the slowdown in nuclear energy growth. Nuclear development in the U.S. has virtually flat-lined for the past three decades and continues to face huge challenges.

Nuclear plants are also facing retirement thanks to stiff competition from natural gas generators and renewables. At the same time, new advanced nuclear designs hold great promise for the industry.

Challenges Facing the Existing Nuclear Fleet There are 94 nuclear reactors operating across the country, but one quarter of reactors are at risk of shutting down. Maintaining fuel diversity is key to grid reliability. However, wholesale electric power prices across the country have recently plummeted to historic lows largely due to the sustained decline in natural gas prices. While nuclear energy has extremely low operating costs, the additional capital costs make it difficult for plants to remain profitable amid such low gas prices. 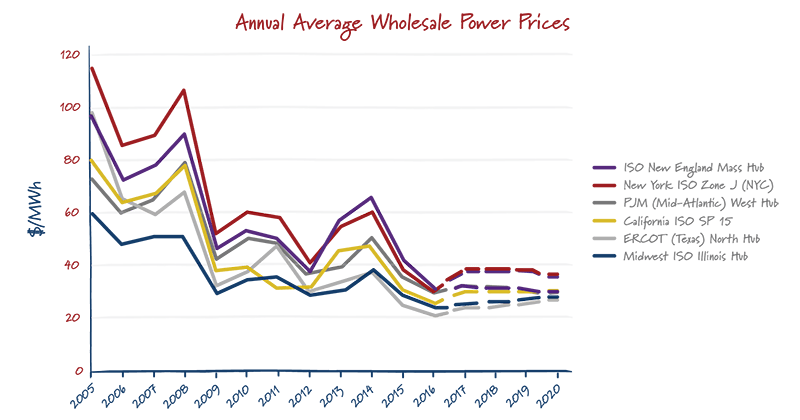 The impact of low natural gas prices is having the greatest impact in states with restructured electricity markets, such as the Northeast, Mid-Atlantic, Texas and much of the Midwest. In restructured markets, plants compete to provide power and are being outbid by natural gas plants. In regulated markets such as in the Southeast, nuclear plants are much less likely to close because the utility recovers the cost of generation and there is no competition between power plants.

Remaining Plants at Risk
As of August 2020, twelve reactors have prematurely shut down since 2013, and eight additional reactors have announced shutting down by 2024.5 Many of these plants are in non-regulated markets, and PG&E’s dual-unit Diablo Canyon in California has been pressured to announce its retirement because of the state’s renewable energy policies. According to some estimates, upwards of half of the U.S. nuclear fleet is at risk of premature closure by 2030.6,7 Those who support nuclear power due to its local economic impact, environmental and resilience benefits have proposed a number of solutions to keeping plants online. State legislators in Illinois and New York have enacted around market solutions to keep plants afloat by valuing their zero carbon attributes. Other areas of the U.S., including the Northeast and Mid-Atlantic, have considered incorporating reforms through regional markets to support nuclear plants. Another option would be to make technology-neutral reforms to price formation in energy markets to increase price accuracy. 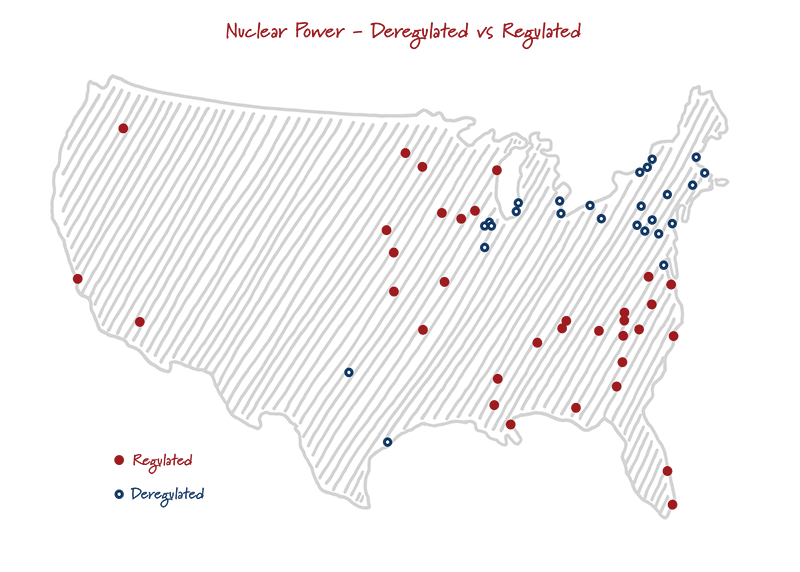 Opportunities for Advanced Reactors
During the golden age of nuclear innovation in the 1950s, the U.S. established the National Reactor Testing Station in Idaho (a predecessor of Idaho National Laboratory) and built more than 50 nuclear reactors of many different types. A number of reactors were also built at other national laboratories and sites – including Argonne, Oak Ridge, Los Alamos, Brookhaven, Hanford and Savannah River. The age of nuclear reactor innovation considerably slowed when the U.S. Navy’s nuclear fleet began exclusively using light-water reactors (LWR) to power submarines and aircraft carriers. The commercial sector followed the Navy’s lead. From the late 1960s through today, almost every nuclear power plant built in the U.S. (and most built worldwide). LWRs pump water under high pressure to cool the reactor and transfer heat from the reactor to the steam turbines that generate electricity. The next generation of advanced reactors, often referred to as Generation IV, builds on the other designs from the 1950s and 1960s. In 2019, dozens of North American companies are working on these next generation designs.8 These companies are considering new approaches, including: reducing the size of the reactor, designing for modular construction, using coolants other than light water and incorporating simple physics-based safety measures. Some designs can even use recycled nuclear waste as fuel. While our current light-water reactors are extremely safe, these new designs incorporate innate safety that reduces the physical construction costs. 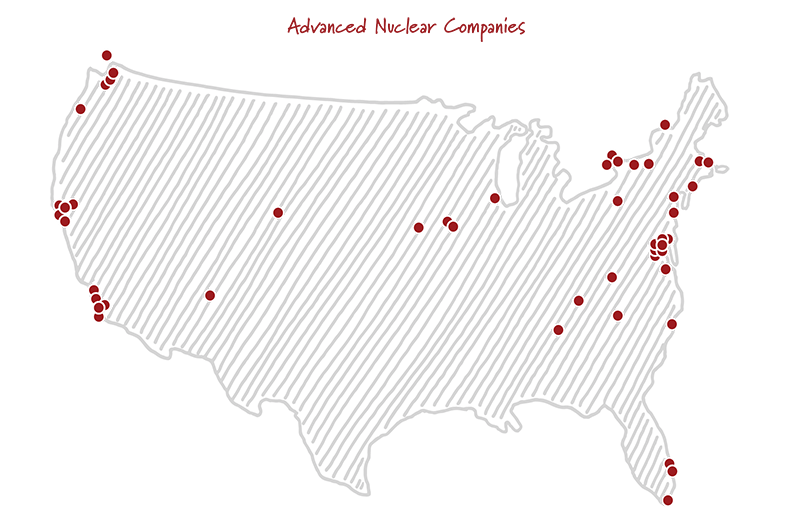 Nuclear Energy is at a Crossroads While America is scheduling shutdowns, China and Russia are ramping up. China has 16 reactors under construction in 2019 and Russia is exporting its reactor designs abroad.10,11 While nuclear power was developed in the U.S., the U.S. is at an inflection point from which it can either flourish through new technology, or slowly decline as part of the larger electricity mix.

A Light in the Tunnel The U.S. has recently made some big moves toward embracing advanced nuclear energy. The Nuclear Regulatory Commission is busy laying the foundation for advanced nuclear projects to come by creating a new risk-informed licensing structure, Part 53, to prepare for construction of a variety of advanced reactor designs. In 2020, the Office of Nuclear Energy gave 10 awards under the Advanced Reactor Development Program (ARDP), two of which are to complete two advanced nuclear demonstrations by 2027. Along with other efforts, one of the awarded projects will make strides toward establishing HALEU production, an advanced nuclear fuel necessary for almost every new reactor design. Advanced nuclear reactors have a significant role to play in the energy transition as a reliable, carbon free asset.