Integrated Energy Systems: Getting More From Our Nuclear Workhorses

Our power grid is changing. As renewable energy generation increases, our baseload electricity sources — like nuclear, coal and natural gas — are often being asked to operate in ways they weren’t designed. Take nuclear reactors for example, they generally do not ramp up or down quickly due to the financial benefits of operating at maximum output. In other words, nuclear may need to ramp down, generating less power from its turbines, when it is very windy or sunny, and ramp back up at night or when the wind is not blowing. Nuclear reactors were designed to run like a car cruising down the highway on cruise control, but with the changing demands of more solar and wind entering the grid, the reactors are now having to navigate stop and go traffic. Despite this recent challenge, our nuclear fleet is up to the task and continues to provide constant, reliable electricity on a huge scale. In the United States, nuclear power provides most of the nation’s carbon-free electricity and adds approximately $60 billion to U.S. GDP. However, 25 nuclear plants are at risk of closure by 2030 – more than three times the generation of U.S. utility-scale solar in 2019 – largely due to subsidized renewables and market factors like low-priced natural gas power. If that happens, the United states will lose a significant portion of its carbon-free electricity.

Innovative business models may add new value to the US nuclear fleet. Instead of allowing those nuclear plants to close, if we make nuclear reactors more flexible, they could “back up” renewables, thus expanding our total carbon-free capabilities and moving us towards a zero-carbon future.

Both increasing the flexibility of nuclear reactors while making such flexibility not only cost neutral, but revenue-generating seems unachievable, right? Well, what if we can kill two birds with one stone? Integrated energy systems do just that: when nuclear reactors are producing more electricity than the grid needs, they can divert some of their thermal heat and/or electricity to produce materials for clean electricity, clean transportation, clean industry, and clean water. Doing so can provide additional revenue, allow for operational flexibility, and contribute to the growth of clean markets for deeper decarbonization – it’s not just a win-win, but win-all. 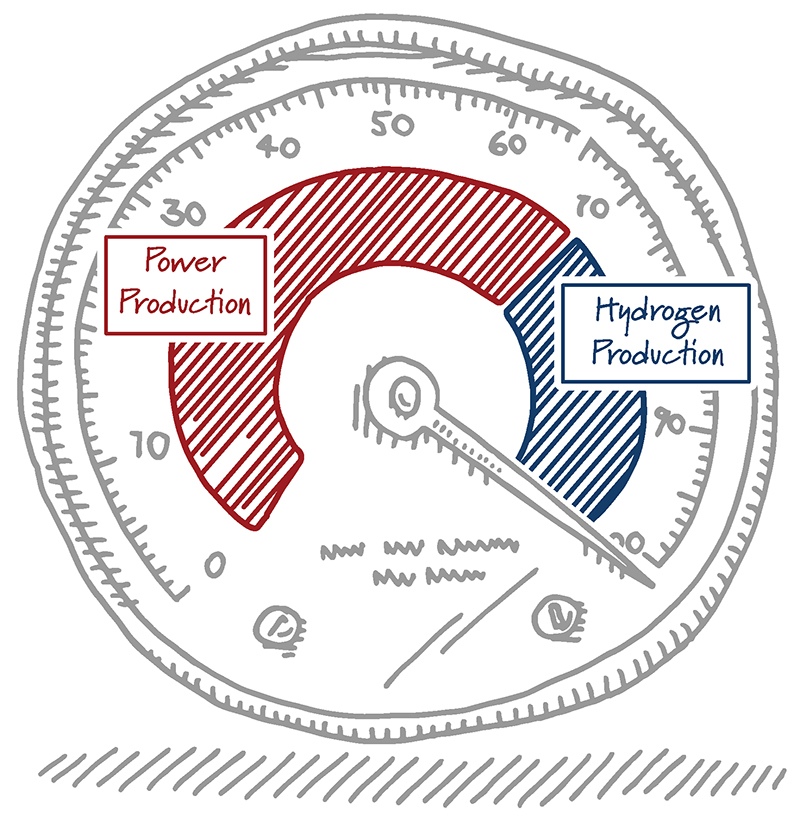 Flexible nuclear isn’t new. Some countries have added flexibility to their nuclear fleets through technical solutions. France, the Czech Republic, and Russia either modified or designed their reactors in the 1980s, 1990s, and 2000s, respectively, to incorporate ramping abilities. For example, the French fleet was designed to provide load following as well as primary and secondary electricity reserves, partly by using “gray rods” for control rods, which allow finer ramping control instead of reactor shutdown. Since nuclear provides 80% of France’s electricity, their reactors must ramp to meet changing consumer demands over the course of a day or week. By contrast, nuclear provides only one-fifth of electricity in the United States and varies widely by region. Outside of select locations, like the northwestern U.S., nuclear simply has not faced a need to overcome the economic barriers to ramping until today.

To face modern flexibility needs, the U.S. nuclear industry has turned its attention to using integrated energy systems, a holistic approach to energy. For a nuclear reactor, this means employing unutilized heat or power generation for non-electricity purposes that serve a wider need, such as thermal storage, hydrogen production, chemical production, and water desalination. This approach works better for the U.S. than ramping because it will improve flexibility while meeting broader energy sector and decarbonization objectives. Studies from the Department of Energy’s (DOE) national laboratories explore the economic and technical viability of using excess heat and/or electricity to produce useful products, therefore introducing an additional revenue stream. 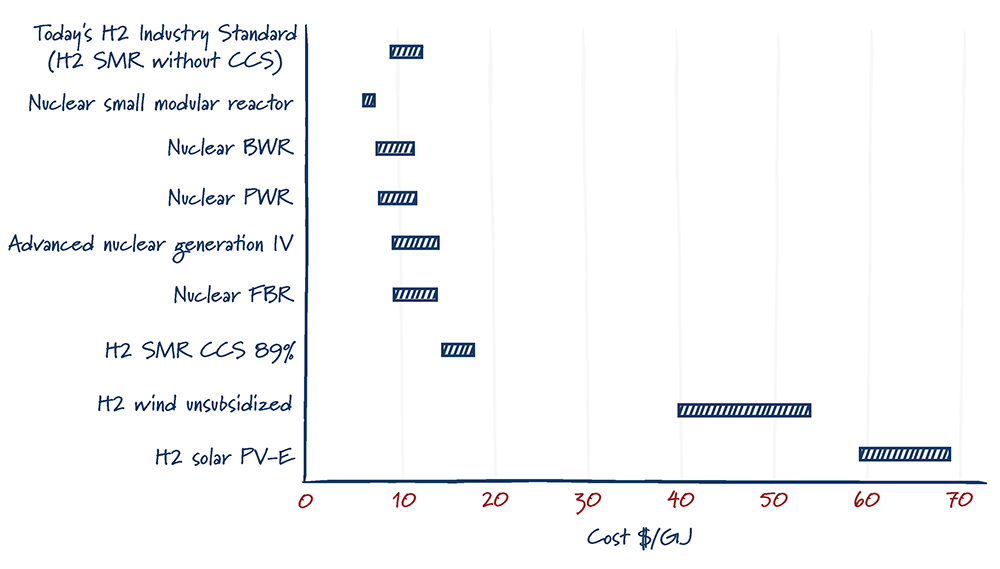 Of the avenues available, hydrogen production and desalination have received significant attention for the size of the opportunities they present. Hydrogen is already an established market: ten million metric tons of hydrogen are currently produced in the U.S. for use in industrial processes like treating metals, producing fertilizer, and refining petroleum. Ten nuclear reactors alone could produce a fifth of the hydrogen currently used in the United States. In the near future, hydrogen could power the backbone of the industrial system: Nikola big rigs, Maersk barges, and manufacturing processes such as steelmaking. These additional applications add up to a market value of $2.5 trillion annually.

Like hydrogen production, desalination is an attractive prospect because it produces a widely used product: fresh water. In regions where water is an expensive commodity, the ability to produce usable water on-site can deliver significant cost savings to light water reactors, which require water for cooling. Excess clean water could also be sold like hydrogen, generating an additional revenue stream.

The U.S. shale gas revolution, which made natural gas very economically competitive, is less than two decades old but has contributed to most of the recent U.S. carbon emissions reductions. Thus, if using nuclear reactors to produce alternate products is economically viable, this hybridization could provide an encouraging path for existing, and future, nuclear in a low-carbon future.

These ideas aren’t just studies and theories – they’re being put into motion.

The utility NextEra Energy is already forging ahead with a hydrogen plant. Scheduled to come online in 2023, the project would pair a 20MW electrolyzer with a solar facility in Florida to produce green hydrogen. The success of this pilot project could open the door for utilities across the country to expand into the hydrogen market. Looking ahead, energy-dense nuclear provides an opportunity to meet this market; with a collective 95 operating commercial nuclear reactors, utilities across America could soon look to pair electrolyzers with this existing clean energy source.

To support and spur this growing interest, DOE operates a program called H2@Scale, a cross-cutting initiative “to produce hydrogen economically and in environmentally friendly ways.” In August 2019, the program announced an exciting integrated energy system project: partnering energy company Exelon with the Office of Nuclear Energy, three national labs – Idaho, NREL, and Argonne – and the Norwegian firm Nel Hydrogen to build an integrated hydrogen production, storage, and utilization facility on the site of an existing nuclear plant. This groundbreaking project will test integration of the 1 MW electrolyzer unit with a nuclear plant, as well as the viability of dynamically operating a nuclear reactor in a vertically-integrated process.

In September 2019, the Office of Nuclear Energy announced similar projects at three plants – Davis-Besse in Ohio, Palo Verde in Arizona, and a yet to be announced plant in Minnesota – to share costs on first-of-a-kind projects to retrofit a light water reactor with a hydrogen production unit. 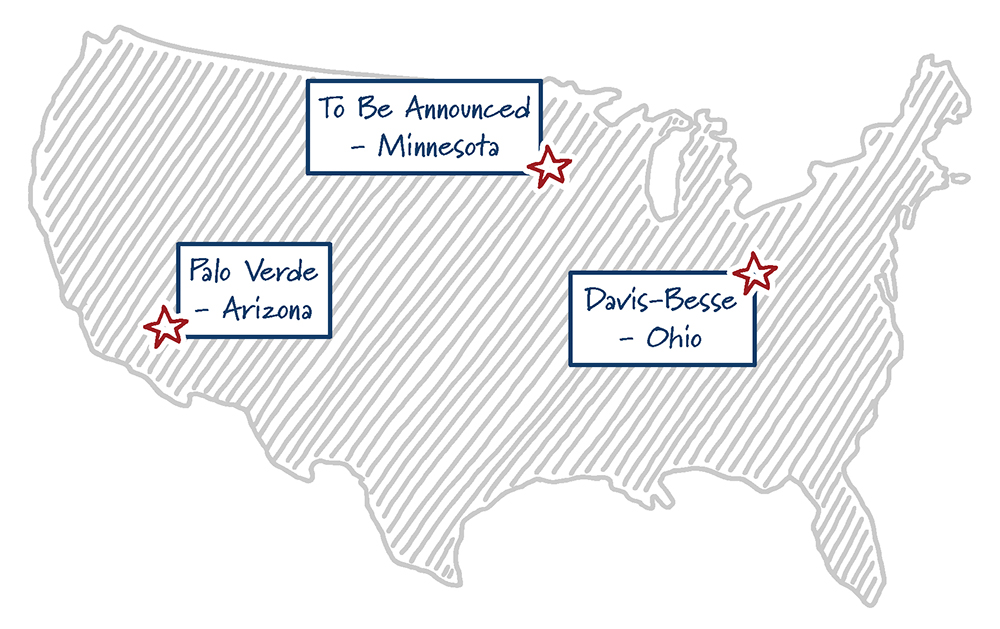 These three projects will add hydrogen production units – enough to create the equivalent of 50,000 gallons of gas per day, – and should take about two years to complete. The initiatives include cost shares for construction; for example, the Davis-Besse amount is $9 million of the $11.4 million total cost. For further details on each project, see Idaho National Laboratory, “INL Selected to Partner with Three Utilities on First-of-a-Kind Integrated Energy Systems” and Power, “Three More Nuclear Plant Owners Will Demonstrate Hydrogen Production.”

First, these projects will test the efficacy of electrolysis for commercial production of hydrogen. Most of the United States’ 10 million metric tons of hydrogen is produced via steam methane reforming, which relies on the heat and methane of natural gas to create hydrogen. Electrolysis, on the other hand, uses electricity to split water into hydrogen and oxygen atoms. Low temperature electrolysis has not been explored at commercial scale because it is less efficient and is dependent on the cost of the electricity used. High temperature electrolysis, which Arizona Public Services and Xcel Energy are exploring for their Palo Verde and Minnesota projects, respectively, is even less commercially tested. However, a nuclear reactor is a perfect heat and electricity source for electrolysis – it’s reliable, cost competitive at large scale, and emissions-free. Pairing these two technologies can maximize a nuclear reactor’s generation capacity while improving economics, just like batteries can support wind and solar facilities.

Second, these projects will explore how easy it is to add additional revenue streams to an existing plant. Low temperature electrolysis units are plug-and-play, able to take excess electricity when consumers don’t need it, much like how batteries can be readily added to a renewable energy project.

As a bonus, the hydrogen product can fit diverse situations, since adding a hydrogen production unit can have many use-cases. For Palo Verde, it provides an alternative to curtailing power when there is a lot of solar generation as well as an on-site energy storage option. For Arizona Public Services and Xcel, green hydrogen production helps meet climate goals. For Exelon, the hydrogen can be used on-site to replace hydrogen already used in a nuclear plant’s operation, providing an accessible, economic alternative to purchasing hydrogen. Any of these options could also be replicated at nuclear plants around the country.

If successful, these projects could prove a win-all scenario for both nuclear and difficult-to-decarbonize sectors. Integrated energy systems could help operating nuclear reactors stay economically competitive in a changing energy sector while reducing the emissions of the industrial sector and expanding the storage and fuel cell capabilities.

Arizona Public Service has also explored the economic viability of integrating a water desalination facility at its Palo Verde nuclear plant, the same site building a pilot hydrogen production facility under a DOE cost share. Currently, the Palo Verde plant uses wastewater in its cooling operations due to its arid location, an expensive process compared to the rivers or lakes used by other reactors. With Sandia National Laboratory, the plant’s operators are already exploring how to reduce Palo Verde’s water use to reduce cost. Yet reduction isn’t the only option.

In 2018, Arizona Public Service and Idaho National Laboratory conducted in-depth modelling of what it would look like to add a reverse osmosis (RO) desalination plant on-site at Palo Verde. The model showed that in a grid with Arizona’s high penetration of solar, it is economically advantageous for Palo Verde to take advantage of the negative electricity prices that solar sometimes creates. During these negative pricing events, a RO plant could create desalinated water at about $1-1.5/m3, and although the source and salinity of the water affects this price, in several circumstances this project is economically viable and even revenue generating.

More research is needed to determine the exact profit margins of a desalination project, since local electricity needs, existing water resources, and local geologic conditions all affect a potential project’s cost. However, as the effects of climate change impact our water supply, the ability to keep reactors online while providing a vital resource through desalination could prove to be a solution.

These projects are on the horizon now. If they prove successful, integrated energy systems could have broader applications not long afterward. Advanced non-light water reactor designs are planned to be operational in the mid-2020s. These reactors not only provide electricity, but their higher output temperatures could allow for a concurrent revenue stream from their process heat. Modular reactor designs could even have one module focusing solely on the production of products if the market demands it, while still allowing the flexible operation of the other modules.

The domestic nuclear fleet is vital for both mitigating CO2 emissions and supporting the U.S. economy. By finding innovative ways to use current and future nuclear reactors, we can leverage our existing infrastructure to decarbonize and add millions of dollars to the U.S. economy.