What if we could harness the reaction at the core of the sun to generate power? For decades, scientists have been trying to do just that: create a fusion generator that could supply the world with unlimited clean electricity from hydrogen molecules found in seawater. In the past decade, innovative designs and scientific breakthroughs have brought this goal close enough to impact our electricity system on a climate-relevant timeline. This 101 explores how fusion works, what has happened lately, and why fusion could help reduce emissions. 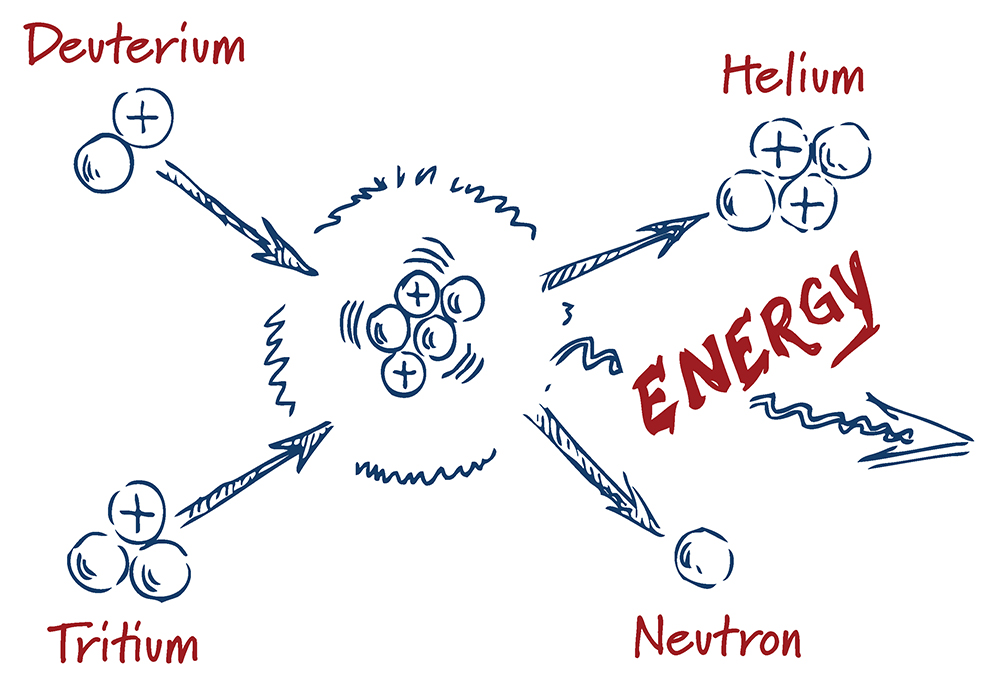 A fusion reaction is basically a miniature star. Fusion is the collision of extremely heated atoms; when the atoms are heated, they turn into plasma, the super-charged state of matter where electricity can flow. By fusing a tiny amount of fuel, usually hydrogen, and containing that reaction, clean energy can be generated.

Fusing atoms isn’t the problem – the challenge has been doing this efficiently so the reaction produces more energy than it consumes. Fusion requires a combination of high heat and intense pressure; the sun has 330,000 times the mass of Earth and a temperature of 30 million degrees Fahrenheit1. That’s 8,500 times hotter than a coal or natural gas plant! Since the sun’s mass can’t be recreated here on Earth, the temperature has to be cranked way up — about six times (or more) hotter than the sun. The extremely low volume of fuel means the reaction is safe at such high temperatures. Pressure and inertia help, too: superconducting magnets, lasers, or piston-driven pressure can force the atoms together to efficiently fuse under Earth’s conditions.

Creating a self-sustaining plasma without the sun is kind of like trying to keep a campfire going in the wind and rain. We know how to make sparks, but turning those sparks into a roaring campfire needs effort and protection from the outside in normal conditions. Add in wind and rain, and you’re putting in a ton of effort to keep the tiny sparks alive. Plus, think of how temperamental those sparks are! That’s fusion — we can get it going, but reaching a self-sustaining reaction at a large enough scale has not yet happened in Earth conditions.

So far, no one has been able to “keep the campfire going” (create a “self-sustaining” plasma) here on Earth at a level that could produce energy because there are so many factors to hone to get it just right. Fortunately, scientists have brought this goal closer than ever in innovative ways in the past couple of years: 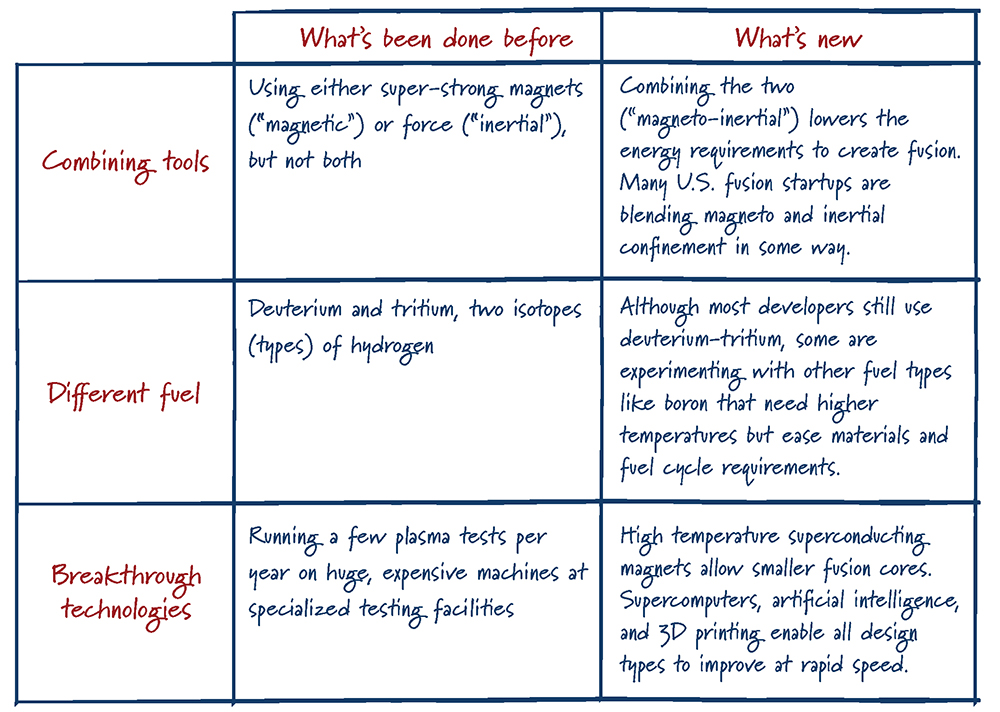 Beyond the science: a fusion power plant

Regardless of its form, one thing is clear — a fusion energy system would look very different from a fission reactor. Different physics means different needs.

Until recently, the main commercialization path for this technology was through ITER, a U.S. co-founded international project to build an experiment in France that will prove how to burn plasma. ITER gives U.S. scientists the invaluable chance to study plasma through international collaborations and provides a market for specialized U.S. industries.2 In addition to ITER, though, some startups are trying to prove fusion energy on a quicker timeline and at a smaller scale. There are over twenty fusion startups in the U.S. alone, each with their own take on a design from shapes to materials. Scientists and investors increasingly believe that these alternate approaches could unlock not only the science behind a fusion plant, but the market for fusion-based electricity.3

Once online, fusion plants could make a global impact. A fusion plant could be small, cost-competitive, and zero-carbon, meaning fusion could help countries around the world decarbonize at a lower cost than other options.

A fission reactor vs a tokamak-based fusion reactor, one of the designs for a fusion core.
A fusion plant could take advantage of existing power plant infrastructure while dramatically differing in core design.

Fusion also has the potential to help decarbonize not only the U.S. economy, but the world:

Although there is still some unknown, the very basics of a fusion reactor lend to potential savings.

Currently, auxiliary parts of the plant — containing tritium safely and making more fuel, for example — present the biggest cost unknowns, but the best and brightest are already on it. The Department of Energy is working with private companies on ways to design these components for a cost-effective plant. To read more about some of the ways American innovators are rethinking fusion, check out the work at ARPA-E.

The wider fusion community, both public and private, has seen concrete action in the last couple of years: