Energy storage is widely recognized as a key clean technology for maintaining an affordable, reliable electric grid. American innovation is driving down the cost of emerging storage technologies, including advanced batteries, thermal storage, and hydrogen. But the largest source of energy storage is also the most overlooked: pumped storage hydropower – though with recent policy and project developments, pumped storage may finally start to get the credit it deserves.

When most people hear the words “energy storage,” they probably think of lithium-ion batteries. Indeed, lithium-ion battery costs have declined by 90 percent in the last decade, which has led to dramatic year-on-year growth. Still, lithium-ion represents a growing but small segment of U.S. energy storage — in part due to supply chain challenges for the required critical minerals. By contrast, pumped storage is by far the largest source of energy storage on the grid today, accounting for about 95 percent of America’s installed storage capacity. Today, the U.S. has more than 21,000 MW of pumped storage, which is equivalent to the power demand of more than 16.7 million households. Much of that capacity is in the Mid-Atlantic and Southeast regions, and has been operating reliably for decades. 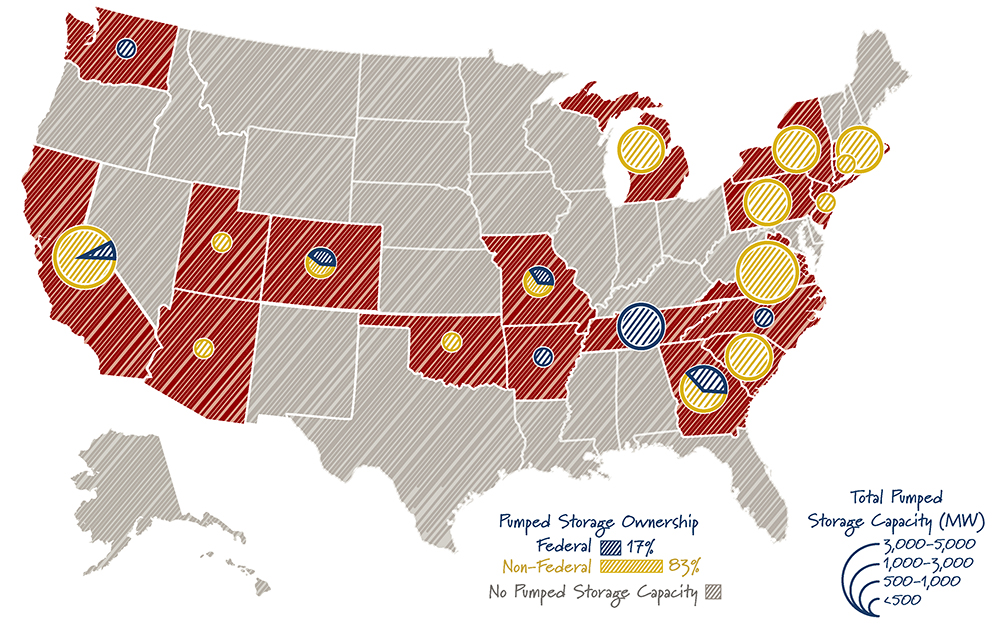 In 2020, the U.S. Department of Energy (DOE) launched the Energy Storage Grand Challenge (ESGC). Under the leadership of then-Energy Secretary Dan Brouillette, I co-chaired the DOE working group that published the Department’s first-ever, complex-wide roadmap on energy storage. The ESGC is the Department’s comprehensive strategy to position the U.S. for global leadership in the energy storage technologies of the future, which includes maximizing the enormous potential for new and existing pumped hydro to contribute as a key source of long-duration, grid-scale energy storage. Go deeper with this blog, A Grand Opportunity for Energy Storage. 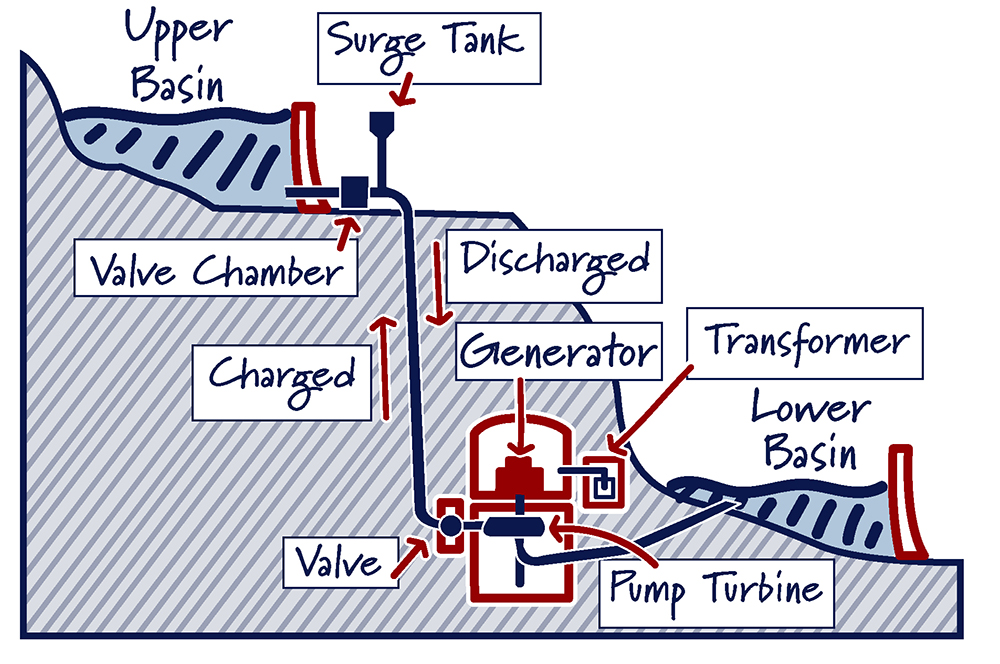 Published in December 2020, the ESGC Roadmap describes current and emerging use cases for energy storage. These include providing backup power to critical infrastructure, maximizing reliability while integrating variable renewables, and electrifying the transportation sector. Meeting the needs of these use cases will require diverse storage technologies. The transportation sector is the major demand driver for lithium-ion batteries, but providing backup power to critical services like hospitals, airports, and military bases, and integrating growing amounts of renewables in the power sector, requires technologies like pumped storage that can deliver multiple days of energy storage at grid scale.

Among energy storage technologies, pumped storage is the workhorse. Pumped storage operates like a large water battery: it can be charged by pumping water uphill and discharged by letting the water flow back down across a generator. Few energy storage technologies offer as many important capabilities to the reliable operation of the electric grid, including load response over a range of durations, black start capability, and ancillary grid services. Importantly, pumped storage is also a domestic resource that does not depend on foreign supply chains dominated by China. Go deeper with this blog, Clean Energy Manufacturing Should be Done in America, not China.

Fortunately, policymakers are starting to give pumped storage the credit it deserves. The bipartisan Energy Act of 2020, enacted in December, modernized DOE’s research and development (R&D) programs and established the most ambitious technology demonstration program in U.S. history across a range of technologies, including long-duration energy storage. The Better Energy Storage Technology (BEST) Act established a performance-based RD&D program at DOE that recognizes the value of long-duration energy storage, including pumped storage. Specifically, the BEST Act authorized DOE to develop innovative pumped storage technologies, such as modular and closed-loop systems, and explore ways to reduce the time and cost of construction, which are major barriers to new pumped storage deployment.

In March 2021, Reps. Cathy McMorris Rodgers (R-WA) and Dan Newhouse (R-WA) re-introduced the Hydropower Clean Energy Future Act, which would modernize the federal hydropower licensing process and promote next generation hydropower and pumped storage technologies. Crucially, the bill also highlights the need to compensate hydro and pumped storage for the full range of services they provide to the electric grid – which complements the policy and valuation track established under DOE’s ESGC.

Under the Trump Administration, DOE established new programs to enhance the flexibility of America’s substantial pumped storage resources and strengthen grid reliability. In 2018, the Office of Energy Efficiency and Renewable Energy’s (EERE) Water Power Technologies Office (WPTO) launched the HydroWIRES Initiative. The goal of HydroWIRES is to maximize the value and enhance the flexibility of hydropower and pumped storage to contribute to a more reliable, resilient electric grid. Essentially, DOE built on its long-running R&D programs to reduce the cost of new hydropower technologies by adding HydroWIRES, a complementary effort to maximize the role of pumped storage in an evolving grid. In March 2021, HydroWIRES published the Pumped Storage Hydropower Valuation Guidebook, which is a framework for project developers and grid operators to assess the value of new and existing pumped storage projects.

In addition to HydroWIRES, DOE also launched a prize competition to spur pumped storage innovation. In 2019, EERE’s WPTO announced the Furthering Advancements to Shorten Time (FAST) Commissioning for Pumped-Storage Hydropower Prize, which focused on reducing the time, cost, and risk required to commission pumped storage projects. In October 2019, DOE announced four grand prize winners to receive up to $550,000. Winning concepts focused on reducing the time and cost of excavation and construction, which often inhibit capital-intensive pumped storage projects. The winners were not large companies; for a modest amount of taxpayer funding, DOE incentivized individual innovators to contribute new ideas to reinvigorate a decades-old industry. 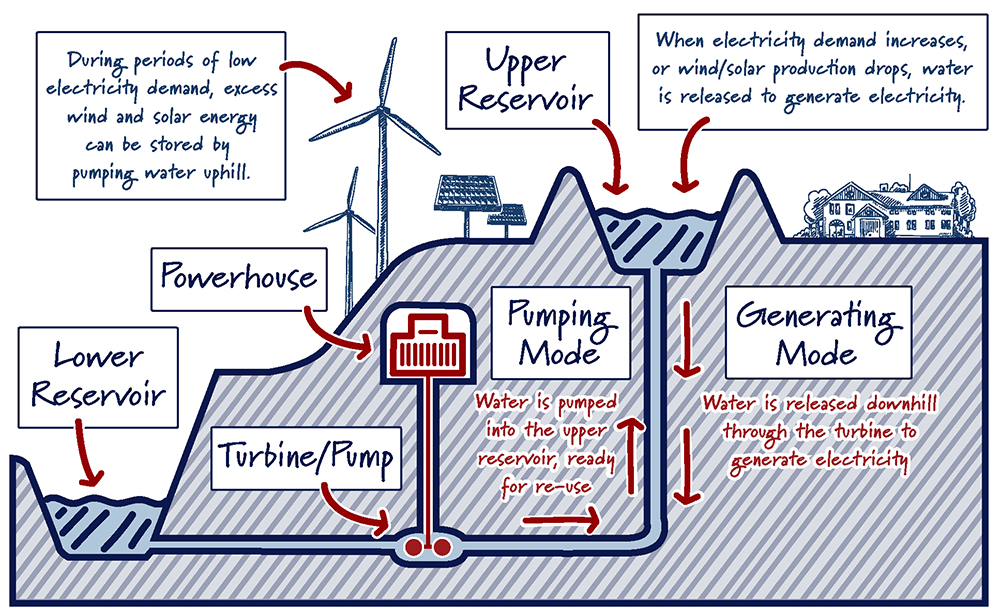 The Goldendale Energy Storage Project is a proposed 2,100 MW pumped storage project in Washington state. In March 2021, local news outlets reported that the project developers, including Boston-based Rye Development, signed project labor agreements that mark a key milestone toward commencing construction on the $2 billion closed-loop facility, which is designed to help balance the region’s electric grid by storing excess wind and solar power.

The Goldendale project was one of two proposed facilities selected by DOE’s HydroWIRES program in 2018 as case studies for the Pumped Storage Valuation Guidebook. After DOE published the guidebook in March 2021, Erik Steimle, Vice President of Project Development for Rye Development, said, “We are happy to see it released. It will help companies like ours explain the benefits and importance of projects like the Goldendale Energy Storage Project.” According to Rye Development, the project will create more than 3,100 local jobs, including construction, operation, and maintenance. It is expected to come online in 2028 and the lifetime of the project is expected to exceed 80 years.

In 2019, Quidnet received funding from DOE under the Advanced Research Projects Agency–Energy’s (ARPA-E) long-duration storage program, called DAYS. Around the same time, Quidnet also partnered with EERE’s WPTO through HydroWIRES. With this support, Quidnet announced it achieved key milestones under the DOE projects, including the completion of system-level design and engineering, and successful testing of key operating components at an industrial machining facility in New York State. As Quidnet CEO Joe Zhou explained, “WPTO and ARPA-E have been vital partners in the development of our long duration energy storage technology. These leading energy technology organizations have brought valuable resources and oversight to the development process, helping steward our technology toward commercialization.”

The Cat Creek Energy and Water Project is a proposed 1,000 MW “tribrid” pumped storage, solar, and wind project near Mountain Home, Idaho. On April 29, Cat Creek announced a partnership with Voith Hydro to design and manufacture the turbines for the project’s 720 MW pumped storage component. In a joint statement, Cat Creek and Voith explained, “This stored water volume will provide five complete days of full generation capacity (720 MW) from the pumped storage facility, creating one of the most significant Large Volume, Long Duration (LVLD) energy storage facilities in the West.” The pumped storage component will store excess electricity from onsite wind and solar, strengthening the flexibility of the region’s electric grid. Cat Creek and Voith claim the project will also provide critical water storage for local municipalities, water authorities, and irrigation districts in the Boise River Basin.

Pumped storage hydro is America’s most abundant, reliable source of long-duration energy storage. Previously written off as a technology of the past, pumped storage is resurging with an exciting new pipeline of projects, which demonstrates the capacity of the industry to innovate and adapt. Congress and DOE should build on the foundation in the Energy Act of 2020 and the Trump Administration-established HydroWIRES Initiative to support the commercialization of next-generation pumped storage projects, which will enable a more flexible, reliable, and clean energy system.