The future of U.S. hydropower no longer looks like the Hoover Dam – but more like your bathroom sink.

There are new ways of creating electricity from existing flows of water, be it pipes in municipal systems or an irrigation canal on a ranch.

How We Can Make Power from Pipes1 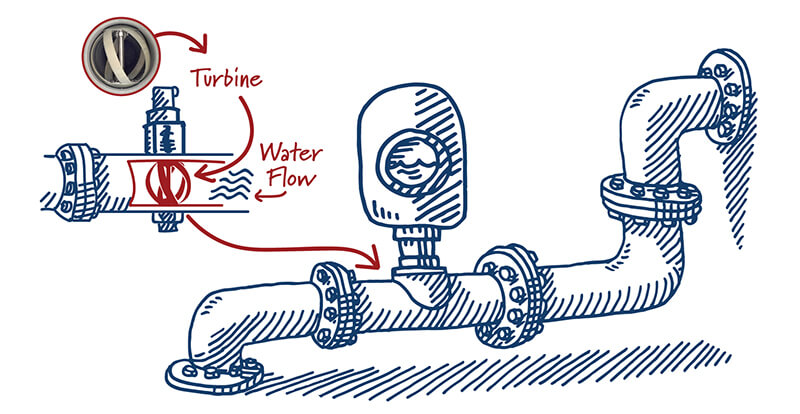 These systems harness the same force of flowing waters that is used by dams and large hydro projects via turbines, such as those designed by Oregon-based Lucid Energy, Washington-based Soar Hydro and Georgia-based Emrgy.

The umbrella term for these projects is “conduit” or “energy-recovery” hydropower.

The reality is that big, conventional hydropower has stalled for the past two decades, leaving a giant hole for small hydro to fill. No large hydropower projects have been built in the United States for decades because the prime dam locations have been developed. In terms of capacity, 76 times more hydropower was built in the 1960s than in the 2000s.2 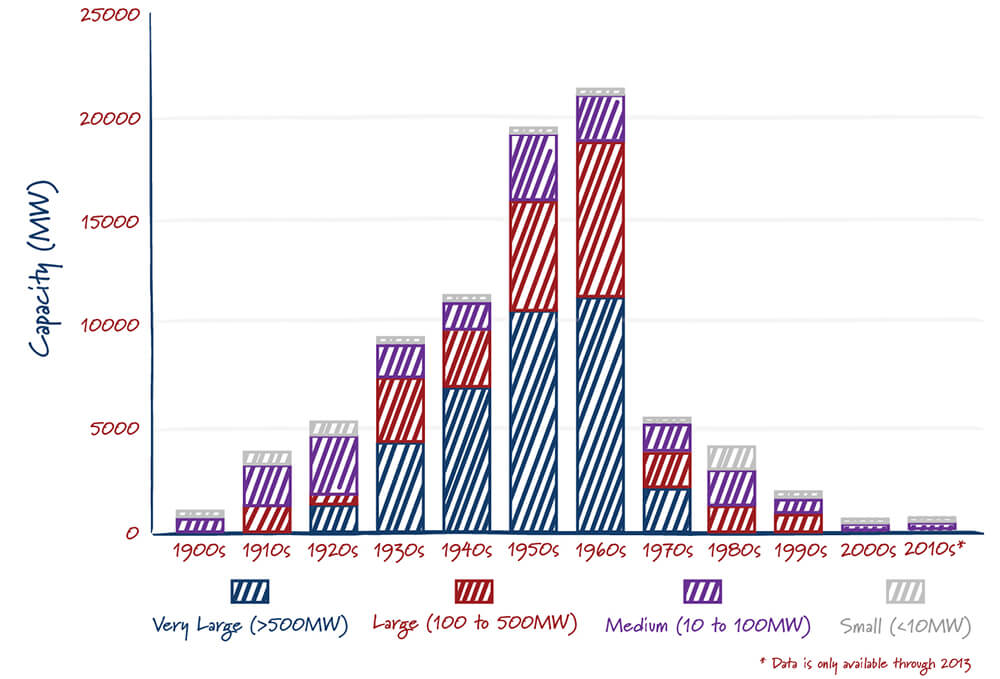 Despite the slowdown, the Department of Energy found that the industry could realistically grow by 50% by 2050 with advanced hydropower technologies that don’t rely on new dams.4

There is a growing realization broadly in the Trump administration and Congress that we need to do more to tap hydropower (pun intended) due to its huge potential, high reliability and low cost. President Trump has said hydropower is a “great, great form of power,” but “we don’t even talk about it because the permits are virtually impossible.”

That’s about right. But that also may about to change. Here’s why the reason may center less on the bigger projects and more about what many of us can do on our own land.

The potential
There is enormous potential in small hydropower projects.

The U.S. has 1.2 million miles of water supply mains.5 Within these water pipes alone, there are thousands of hydro generation opportunities. According to an estimate by the Department of Energy, the potential of energy-recovery hydropower projects could be more than all the new conventional hydropower projects built in the USA over the past decade (1.7GW of conventional vs. up to 2GW of energy-recovery hydropower potential).6,7

The tens of thousands of U.S. water and wastewater systems are among the country’s largest energy consumers (½ as much electricity we all use for lighting8, which is A LOT), most of which is used to power pumps that move water around.9 We can turn many of them from being purely power consumers to generators. And fully tapping conduit hydropower potential could translate to more than 10,000 new jobs.10

No Fish in Our Pipes 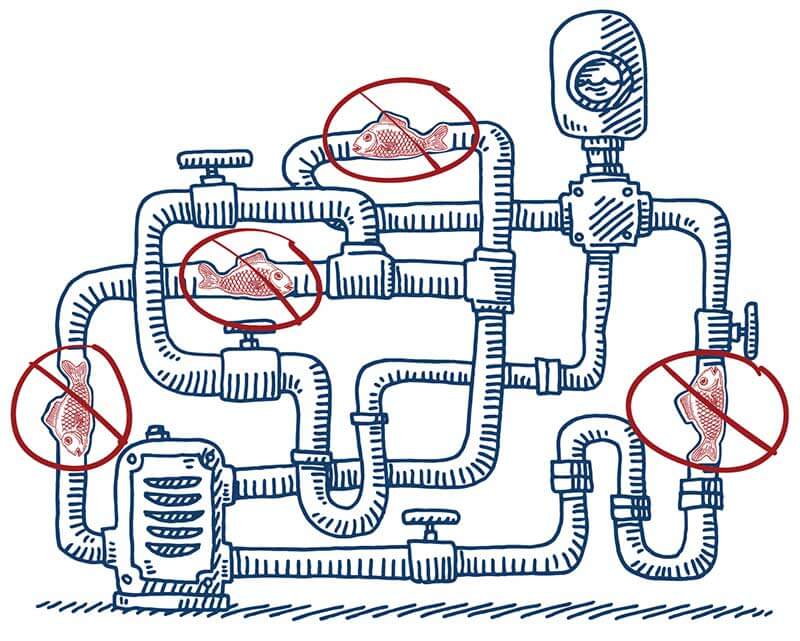 Environmentally-friendly
Energy-recovery hydropower is environmentally friendly – there are no fish in our pipes and the water would be transported anyway. Not only does it create clean electricity, it also makes use of energy that would have been otherwise wasted.

These are the prime reasons environmental groups, notably American Rivers, rallied behind streamlining the permitting process behind these types of projects a few years ago. Let that sink in.

Congress overwhelmingly passed a bipartisan hydropower bill in 2013 to speed up the approval of energy-recovery hydro projects. But lawmakers are now looking to go even further.

A bill from Reps. Richard Hudson (R-N.C.) and Diana DeGette (D-Colo.) would cut the federal review process in half for small energy-recovery projects. FERC Deputy Associate General Counsel John Katz, at a House hearing, actually went a step further, suggesting that the review period should be cut by 75%.

That’s right, a regulator proposed a change that would speed up review times. Must be a good idea.

Where is conduit hydropower installed? 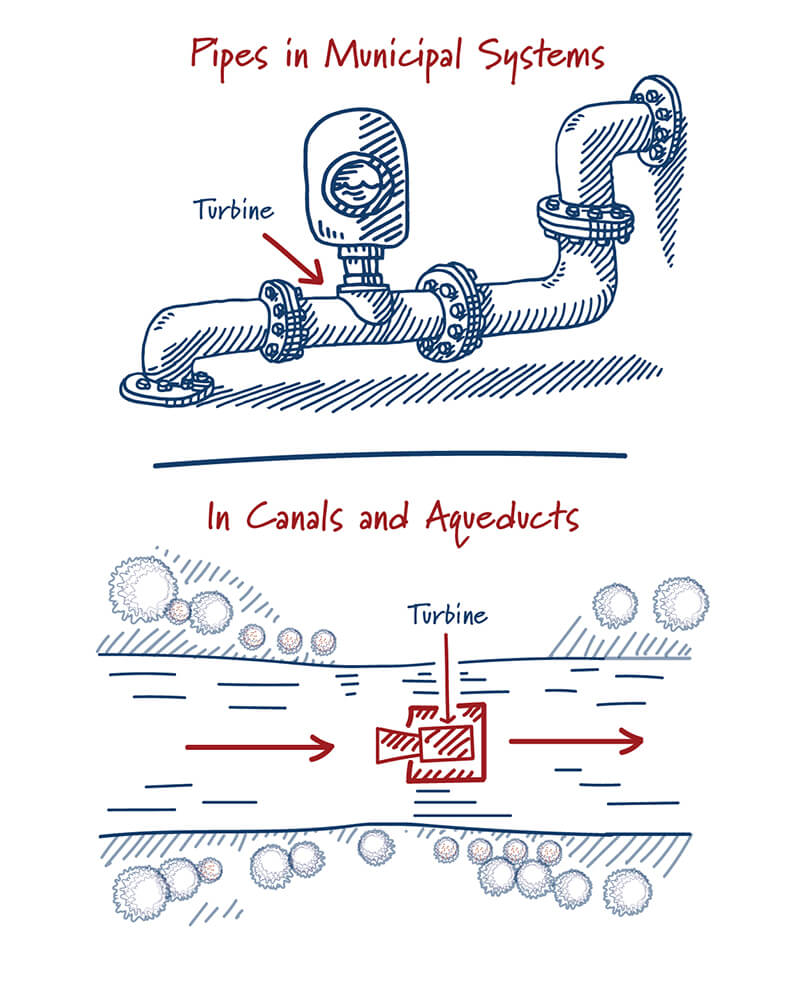 Streamlining permits
When putting a small pump in an irrigation canal to get water to their fields, ranchers don’t need to go to the federal government to get approval. Yet, a conduit hydro device the size of a pool pump must receive permission from the government. We can’t illustrate this enough: this is private land, private electricity use and private man-made systems. And it still needs federal approval despite having virtually zero environmental impact.

Despite the large opportunity, the industry is still at a standstill with the Federal Energy Regulatory Commission only approving a few dozen projects per year. At this rate, it would take about 200 years to tap all of our energy-recovery hydropower potential. Municipal water owners and farmers, with no experience in dealing with FERC, are understandably wary of engaging in the process on their own. And hiring a regulatory compliance consultant can increase project costs by 30%.

The 2013 bill trimmed a years-long federal process to just months, yet the obvious question remains – why should these small conduit projects need federal approval at all?