Posted on October 14, 2020 by Rich Powell and Niko McMurray

Since the dawn of the nuclear age in the 1950s, nuclear reactors have been supplying Americans with clean, reliable, and affordable energy. Innovators of today are making great strides to bring the nuclear power of tomorrow to market soon, and we are on the verge of very exciting breakthroughs.

Developing the next generation of nuclear technology now is essential as many of the largest utility companies in the U.S. are making big bets they will reach net-zero carbon dioxide (CO2) emissions by 2050. They will be the first to tell you that the technology to get them all the way to net-zero doesn’t really exist today.

And without a large helping of nuclear power in the mix to produce needed clean energy, these bets are less likely and will certainly be more expensive.

An Exciting Path for Advanced Nuclear

Advanced nuclear research and development (R&D) is proving to be even more exciting than we imagined just a few years ago, but the key to unlocking the exciting potential of advanced nuclear technology is through demonstrations.

This moonshot goal of bringing advanced nuclear technology to market is part of the Advanced Reactor Demonstration Program (ARDP), a concept that ClearPath helped develop in partnership with congressional leaders like Sens. Lamar Alexander (R-TN) and Lisa Murkowski (R-AK) in 2016. We often see America’s best and brightest engineers, researchers and developers come up with amazing clean energy technology solutions. But getting the technology from R&D, through the valley of death, to actual commercialization often requires robust public-private partnerships, as we had with the shale gas revolution. This landmark program may go on to be the latest success story.

To get the program to where we are today wasn’t easy, and there were many champions along the way that deserve recognition.

To Get ARDP to Where We Are Today Wasn’t Easy

In August 2016, at conference tables at the Idaho National Lab (INL) with Director Mark Peters, and Oak Ridge National Lab with then-Director Thom Mason and now Director Thomas Zachariah, ClearPath became convinced that the number one thing the U.S. needs to get nuclear back on track is a big national goal to demonstrate advanced reactors by 2025.

In 2018, significant legislative milestones were reached:

These developments led Senators Murkowski and Cory Booker (D-N.J.) in the Senate, and Representatives Elaine Luria (D-VA), Denver Riggleman (R-VA), Connor Lamb (D-PA), Rob Wittman (R-VA) in the House to reintroduce the new and improved NELA bill in the spring of 2019.

By the summer of 2019, the Senate Energy and Natural Resources Committee advanced NELA, and by the fall, Congress enacted FY20 spending bills, which included over $200 million to launch the ARDP.

By spring 2020, DOE began accepting private sector proposals for the ARDP and started building the evaluation board.

In July 2020, the Senate passed the National Defense Authorization Act, which included NELA, setting up potential passage later this year when the House and Senate go to conference.

This brings us to today, with the selection of two pioneers for the next frontier of clean energy innovation.

Congrats to the winners!

Congratulations to TerraPower and X-Energy! 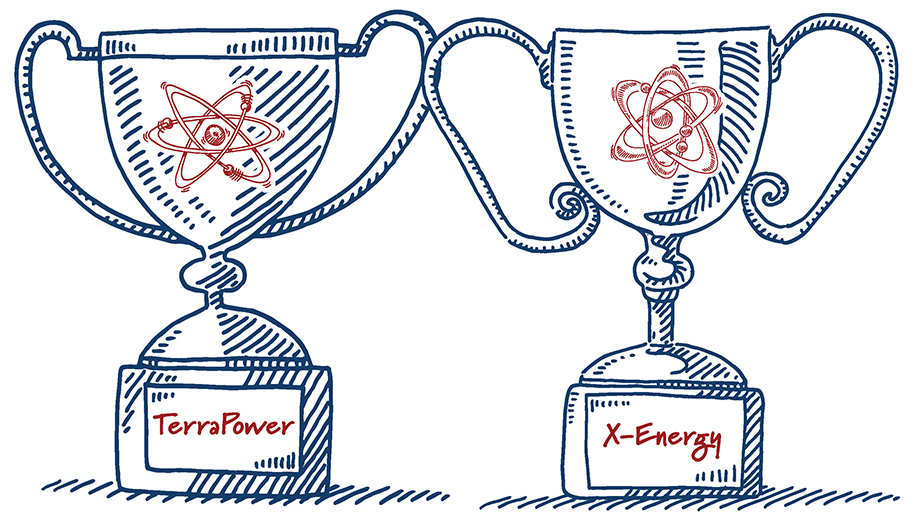 Congratulations to TerraPower and X-Energy! These two companies, along with their teams, will partner with DOE and the National Labs to demonstrate their advanced reactor concepts in the next five to seven years.

TerraPower and X-Energy were selected by Energy Secretary Dan Brouillette and an evaluation board that consisted of members from an electric utility that operates a nuclear power plant; an entity that uses high-temperature process heat; experts from the nuclear industry; and representatives from the finance industry with a background in the nuclear field, among others. They were selected based on the feasibility they can meet this timeline, be licensed by the NRC, and be cost-competitive.

Both designs are fully passive and are able to integrate with the existing grid by load-following or using thermal energy storage.

For the U.S. to regain nuclear energy competitiveness internationally, we need a product. Even with recent policy changes, like the International Development Finance Corporation (DFC) lifting its restriction on nuclear financing, without a cost-competitive product, countries are unlikely to take the financial risk to build a U.S. design that has not been demonstrated. 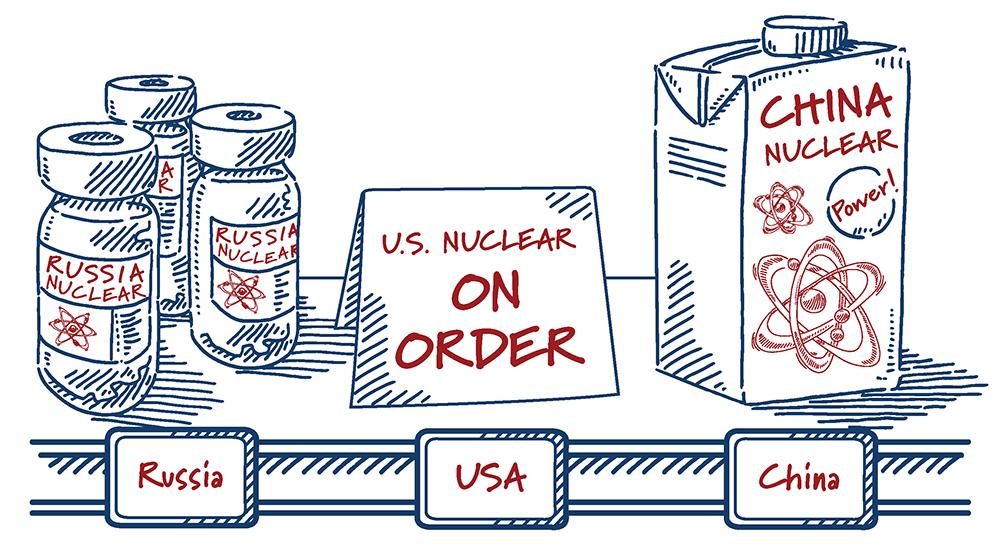 Also, it is important to note that while some designs weren’t selected, this moonshot goal mobilized the entire industry. Having the ARDP set a real, concrete goal – not simply allowing companies to state that their technology will be ready sometime in the 2030s – drove collaboration, focused the industry, and provided invaluable experience to many reactor startups. Applicants had to consider how they could meet the timeline set by the program, which drove them to consider the readiness of their technology and forge strong partnerships with other organizations to build, site, and support the commercialization of their designs. Only robust teams of reactor developers, utilities, private capital, and manufacturers could be competitive to meet these timelines and cost share requirements. Teams also had to identify the necessary steps to procure fuel and prepare an NRC application to meet the appropriate regulations. And perhaps the most important piece is they had to ensure cost competitiveness.

While the ARDP helps jumpstart the industry, more than just setting up a program will be required.

The ARDP will help defer first of a kind risks, but X-Energy and TerraPower will have to meet the program’s timeline and prove they can build on time, and on budget. They need to demonstrate their designs can compete in the market.

DOE also has a role to play as it supports the awardees. The research and design work is obvious, but taking steps to modernize their contracting processes to support these agile companies is another step the DOE should take. Initiatives like the Gateway for Accelerated Innovation in Nuclear (GAIN) and the National Reactor Innovation Center (NRIC) can help coordinate the National Labs and support future demonstrations. For example, the future ARDP risk-reduction and Advanced Reactor Concepts awards – which should be announced by the end of the year – will also benefit from improved contracting and access to DOE and the National Labs.

The NRC needs to continue to incorporate the past several years of preparing to review and license an advanced reactor as directed by the Nuclear Energy Innovation and Modernization Act. In addition, the NRC will need to prioritize and balance the review of these designs with ongoing licensing reviews like the Oklo Aurora. It is also important for the public and other NGOs to continue supporting the modernization of the NRC’s regulatory framework to efficiently license any advanced reactor design. For example, many ongoing modernization efforts will also be useful for these designs, including emergency planning, environmental reviews, and security. Finally, it is also important for Congress to consistently support this important project, including authorizing the ARDP through one of the several outstanding bills and providing adequate appropriations.

By building these advanced nuclear reactors, the U.S. will be well on its way to producing reactor designs that are usable and cost competitive. While there are additional steps that need to be taken, setting big goals and actually demonstrating real reactors mobilizes the industry, and paves the way for future collaborations between the federal government and private industry. Good luck to TerraPower and X-Energy. ClearPath looks forward to continuing to support actions that reinvigorate the industry.