Hydrogen: A Sure Bet in Uncertain Times

Posted on April 7, 2022 by Rich Powell and Natalie Houghtalen

For decades, Europe quenched its thirst for energy with an abundant supply of Russian imports – never envisioning a day when war returned to Europe. The war in Ukraine is a stark reminder of the important and precarious balance America faces in meeting the energy needs of the world today while maintaining national security.

But maintaining this balance is no easy feat – often requiring governments to make difficult choices.

Earlier this month, the Biden Administration announced a ban on the import of Russian oil, liquefied natural gas, and coal to the United States as NATO nations seek to turn up the pressure on Vladimir Putin to stop the war. To offset similar curtailments of Russian gas in Europe, the administration just announced it would collaborate with international partners to direct 15 billion cubic meters of liquified natural gas to Europe this year. Becoming truly energy independent and providing our allies with more energy naturally requires a lot more domestic production.

Meanwhile, the Administration has also embarked on a plan to cut emissions by half by 2030 and achieve net-zero by 2050. Not only can new American energy technologies make up that difference domestically, but will lead to major impacts abroad as more nations turn to American products. Unless we modernize energy infrastructure, improve supply chains for materials critical for more clean energy, and embrace our own resource independence, these goals are not achievable.

Energy security and climate ambitions don’t necessarily have to conflict. Clean energy innovation provides a win-win scenario. Technologies like hydrogen, a low- to no-carbon energy carrier, can be produced, transported, and used all in America. Harnessing our nation’s energy and resource abundance should be the highest priority to avoid dependence on others to meet American energy demand. Hydrogen provides an avenue to do just that – allowing our nation to utilize its robust natural gas, nuclear and renewable capabilities along with other energy resources. It is a crucial domestic tool to lower emissions and increase national security.

And we aren’t starting from scratch—domestic hydrogen production weighs in at just over 10 million metric tons produced annually and is used in the fertilizer and chemical production industry. In the future, that same hydrogen could be used to power 2.4 million transcontinental flights for a Boeing 747. Harnessing the many pathways to produce hydrogen would create new economic independence, and spur the investments necessary to power a better future.

The bipartisan infrastructure bill established Regional Clean Hydrogen Hubs, and states like Indiana, Louisiana and Ohio have already been leading on hydrogen. Other projects recently announced, like SoCalGas’s infrastructure pipeline, demonstrate how hydrogen can leverage intermittent renewables to produce clean hydrogen that can decarbonize the biggest U.S. industrial basin. Exelon is also working on generating clean hydrogen in a nuclear plant near Syracuse, New York.

Hydrogen is the smallest atom in the universe. Yet, this tiny molecule has enormous potential to connect energy generation, energy storage, transportation, and industry. 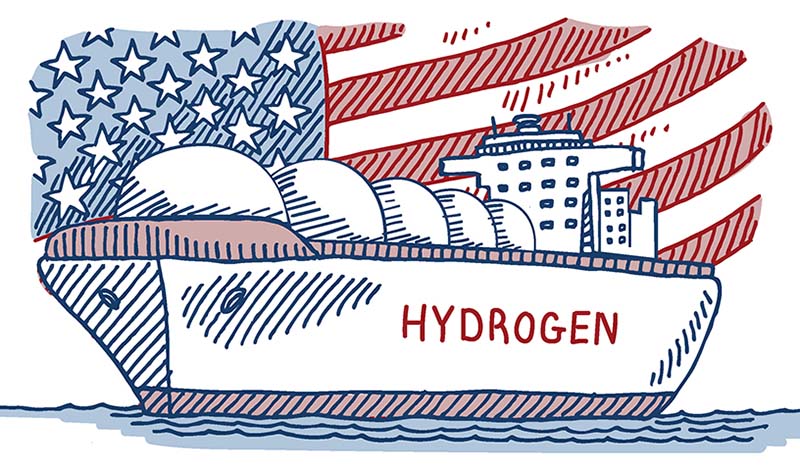 The United States exports more energy than we import, but our dependence on foreign energy puts us at risk. Hydrogen, harnessed from many sources, provides an enviable opportunity to build a domestic energy infrastructure capable of shielding Americans from the fragility of geopolitics, ensuring every household can keep the lights on and providing critical heating and fuel for transportation. Further, thanks to the development of U.S. liquified natural gas export facilities, we can leverage this infrastructure to export hydrogen to our allies in Europe and elsewhere in the future.

Today’s energy and national security crisis is driving calls for increased natural gas production, investments in nuclear energy and renewable sources, and modernized permitting processes so we can mine more domestic critical minerals. The growth of these will propel the hydrogen industry forward and allow us to leverage those resources while reducing emissions and meeting climate goals.

Hydrogen remains one of the most promising elements to fully unlock America’s clean energy potential with the ability to leverage the awe-inspiring energy of the Niagara Falls, breathing new life into nuclear plants from Washington to the Carolinas or natural gas in the belly of the Bakken, Permian, and Marcellus Shale basins. American ingenuity is boundless, limited solely by our willingness to take bold and decisive actions to tackle climate change and secure our energy future.