Where American Gas Goes, Other Clean Energy Can Follow

The United States’ role as a global energy leader has taken on heightened importance since Russia’s invasion of Ukraine. While energy prices here at home have soared, Europe has seen even more dramatic price spikes given the tenuous energy supply chain. As part of Europe’s drastic rethinking of their energy mix, U.S. Liquefied Natural Gas (LNG) has become a critical lifeline to the European Union as it prepares to wean itself from Russian gas over the next six months.

Recent data published by the Energy Information Administration (EIA) makes clear the importance of American LNG. Since signs of the Russian buildup along the Ukrainian border and subsequent invasion in “the first four months of 2022, the United States exported 74% of its liquefied natural gas (LNG) to Europe, compared with an annual average of 34% last year.” In fact, the U.S. is now the leading producer of oil and natural gas in the world, exporting our LNG to 39 countries around the globe. 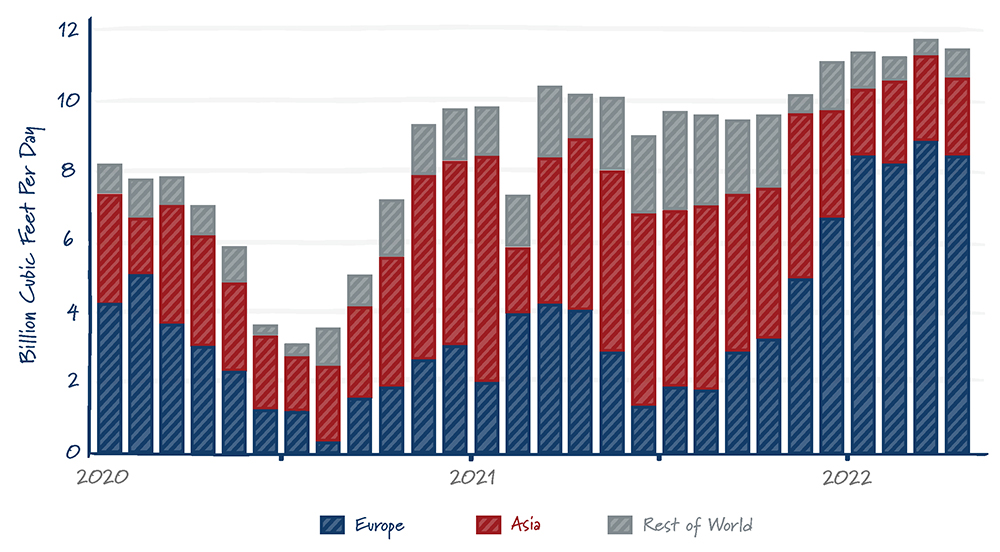 The United States is in a unique position to lead global action on LNG and a number of clean energy sources, while creating jobs in new industries, reasserting America’s global technology and resources leadership over Russia and China, and driving down global emissions. Technological innovation, the American entrepreneurial spirit, and targeted free market incentives have made the United States one of the most carbon efficient economies in the world.

There are countless examples across the energy and industrial sectors, none larger in terms of scale than LNG. A recent life cycle analysis conducted by the Department of Energy’s (DOE’s) National Energy Technology Laboratory on U.S. LNG exports show that American LNG can be up to 30% cleaner than Russian natural gas. 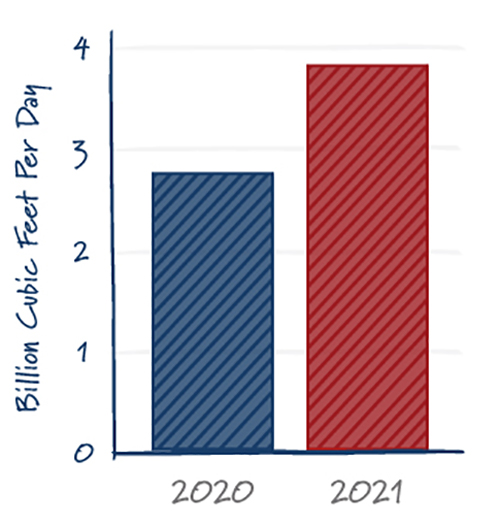 While the process of liquifying natural gas has been going on for more than 100 years in the U.S., the first export shipment of LNG was sent from Cheniere Energy’s Sabine Pass Liquefaction Project in 2016. The strong growth of US LNG exports we are witnessing today is a testament to private sector innovators as well as the public-private partnerships led by the Department of Energy in the 1980s, making significant investments in the hydraulic fracturing infrastructure that has made today’s natural gas exports possible. Even with a short term disruption related to the Freeport LNG facility, U.S. LNG exports are more critical than ever.

A similar story exists for just about all major advances in new energy technology, from oil to nuclear energy to renewables — each had serious government investment in its early stages. Bridging the funding gap from early stage research to commercialization is the largest challenge to bringing new technologies to the global market.

The success of LNG now has the opportunity to manifest again in the form of clean hydrogen, carbon capture, and advanced nuclear technologies. Critical investments like these at the Department of Energy, including those funded by the Bipartisan Infrastructure Law, can further strengthen American energy security.

Russia is not only using their oil and natural gas for geopolitical power. Their state-owned nuclear company Rosatom is in the middle of the nuclear energy supply chain, particularly for countries like Finland, the Czech Republic, Turkey and Ukraine who have Russian made nuclear reactors.

Today there are 52 nuclear reactors under construction across the globe, but only two are in the U.S. Russia accounts for about two-thirds of reactor sales worldwide. China has 14 reactors currently under construction and has announced plans to build 150 new reactors over the next 15 years.

This comes as more nations are recognizing the value of nuclear energy, seeking to avoid making the same mistakes as other countries, namely Germany, that decided to arbitrarily shutter domestic energy resources. This is one of the major reasons why an all-of-the-above portfolio, paired with historic investments in research, development, and demonstration projects is the best and most viable path to reducing global emissions. Now, as Europe rethinks the tools it will use to meet its own clean energy targets and keep their lights on, U.S. innovation and exports can lead the way with a number of clean energy technologies.

Multiple announcements were made around the COP26 in Glasgow in November including the U.S.-Romanian bilateral agreement to purchase new U.S. reactors, the United Kingdom commitment to nuclear as a core part of their net-zero plans, the French recommitment to not only maintain but potentially enhance their nuclear fleet, and the Japanese announcement about restarting their fleet to meet their decarbonization goals. There are other deals already in place, such as Poland’s agreement with NuScale Power to deploy its small modular reactor (SMR) technology.

Beyond nuclear, hydrogen also provides an enviable opportunity to build a domestic energy infrastructure capable of shielding Americans and our allies from the fragility of geopolitics, ensuring every household can keep the lights on and providing critical heating and fuel for transportation. Further, thanks to the development of U.S. liquified natural gas export facilities, we can leverage this infrastructure to export hydrogen to our allies in Europe and elsewhere in the future.

Demand from Europe for U.S. LNG and other clean energy technologies shows no signs of abating as the conflict wages on. Thanks to LNG, America has a growing number of energy trading partners, offering the United States an opportunity to export a broad suite of technologies and firmly cement its position as a global leader in both energy security and emissions reduction. Ultimately, the world is safer and cleaner when America flexes its energy muscle.