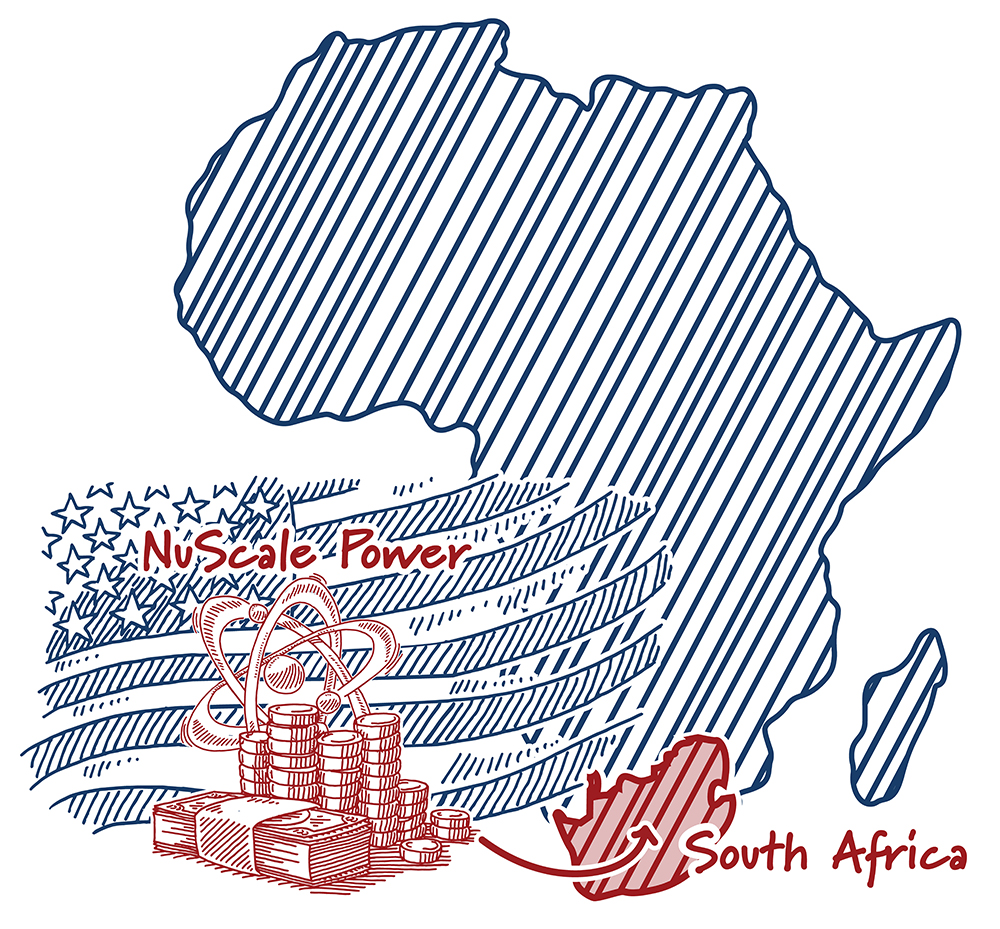 After leading the world in civilian nuclear reactor exports for more than 30 years, America is in danger of ceding that leadership to China and Russia. Along with reaping economic and geopolitical benefits, the global leader will guide discussions around nuclear safety, security and proliferation moving forward. Thankfully, in recent months, the U.S. has taken two important steps to retake the mantle of leadership in this important space. First, the U.S. International Development Finance Corporation (DFC) allowed for the financing of nuclear energy. Second, the U.S. has pledged financing to civilian nuclear-interested countries, should they use American technologies in their nuclear development. A number of these potential deals have been announced recently.

In October, the DFC pledged to support one of America’s leading advanced nuclear companies, NuScale Power, in their bid to build 2,500 MW of advanced nuclear in South Africa as a part of South Africa’s economic recovery plan. While NuScale will need to beat out other bidders to win the contract, the access to American capital will greatly improve their chances of winning the contract, since historically every nuclear power plant built using exported technology has also benefited from export or development financing from the originating nation. This is one of the primary ways Russia and China have been quickly expanding their nuclear energy market share – while U.S. financing sat to the side, Russia and China offered lucrative financing deals to sweeten the deal to build their state-owned technology. 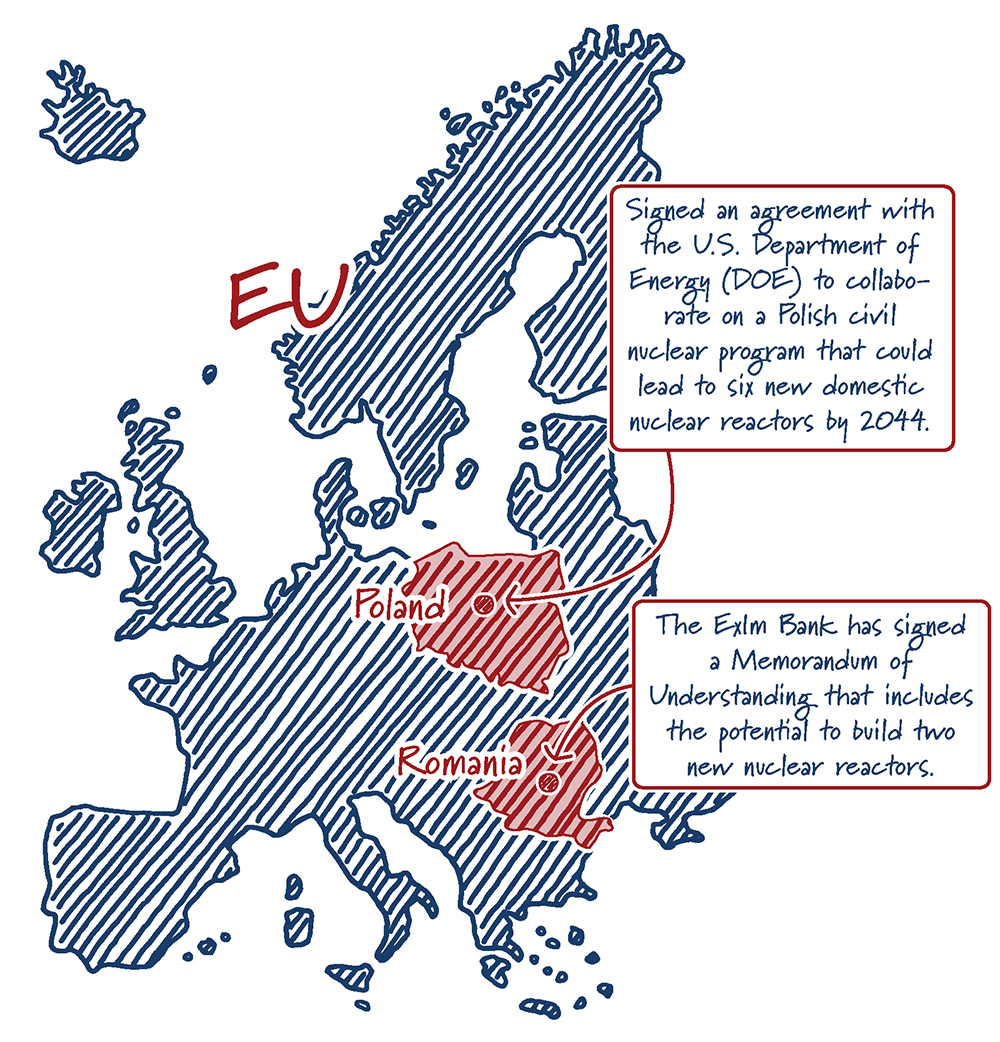 Also in October, the government of Poland signed an agreement with the U.S. Department of Energy (DOE) to collaborate on a Polish civil nuclear program that could lead to six new domestic nuclear reactors by 2044. This agreement includes a Polish plan to purchase at least $18 billion worth of nuclear technology from American companies. To help facilitate this agreement, the U.S. Export-Import Bank (ExIm Bank) created a letter of intent with Westinghouse for $6 billion of initial financing for the projects. Bechtel and Southern Co. are also expected to be involved in the deal.

Similarly, in Romania, the ExIm Bank has signed a Memorandum of Understanding that includes the potential to complete the construction of two nuclear reactors after Romania rebuffed a Chinese offer to build the new reactors.

In Bulgaria, conversations also persist around the potential to build a new nuclear reactor. Likewise, in Ukraine, the U.S. has continued to mutually pursue an agreement to provide nuclear fuel to the existing Ukrainian nuclear plants as Ukraine seeks to break free of their reliance on Russia for power.

Elsewhere, interest from other countries continues to grow. According to the International Atomic Energy Agency (IAEA), around 30 countries, including 10 in Africa, are currently exploring the role nuclear power can play in achieving their development goals. Of these roughly 30 countries, most are considered lower-middle-income or low-income countries by the United Nations (UN), and many are on the UN’s list of Least Developed Countries.

Despite this early momentum that deserves to be celebrated, it is similarly important to recognize the many remaining hurdles that the U.S. needs to overcome to recapture the lead in the international export of nuclear reactors. Some of these countries are interested in large, gigawatt scale, light-water cooled reactors, which are similar to our existing fleet and the Westinghouse AP1000 reactors under construction at Vogtle. Other countries are interested in smaller light-water cooled reactors like NuScale, or next-generation reactor technologies that use other coolants like liquid metal, molten salt, or high temperature helium gas.

With many designs nearing viability, multiple still need to be demonstrated domestically before other countries will be comfortable importing American reactors. To make these domestic demonstrations easier to finance, the U.S. should reconsider its current ban on any other countries financing a domestic nuclear plant. As it stands, no country, not even our closest allies like Canada and the United Kingdom, can possess ownership of a domestic plant without significant bureaucratic challenges. This standard has led to the breakdown of multiple new builds domestically over the past 20 years and threatens to stall the development of the next generation of nuclear reactors.

To enable the export of U.S. nuclear technologies to be more successful, we’ve outlined four steps that still need to be taken.

Nuclear energy remains key in international decarbonization plans. Motivated by the desire to decrease reliance on Russian-owned energy sources as well as the strict emissions requirement of the European Union (EU), Eastern European countries have become a clear partner for nuclear energy export opportunities. We must continue to engage the EU to ensure the requirements of their climate agreements do not exclude nuclear energy, which is currently being debated. Similarly, as many developing countries across the world look to improve living standards by electrifying with clean energy, the U.S. global development entities should evaluate and finance all forms of clean energy, including nuclear.

International leadership in the nuclear energy sector is at stake. If the U.S. continues to advance and streamline domestic efforts, while expanding our export financing capabilities, we can reclaim our role as the world’s trusted nuclear energy leader.