Nuclear fuel “burns” without fire. Heat is created, but unlike fossil fuels or wood, the fuel looks the same before it is used as it does after. Nuclear energy is clean energy. Without fire, there’s no smoke. And without smoke there’s no emissions. Campfires and burning your toast break the bonds between atoms and rearranges them, nuclear power breaks the atom itself. How nuclear fuel is created and deployed is complex and often misunderstood; this article provides a high-level, broad explanation of how low enriched uranium nuclear fuel is currently made and a short introduction to innovative fuel alternatives.

Our current, commercial nuclear reactors all function on the same principle: a large atom (commonly uranium) breaks apart into smaller pieces, and the energy that was used to hold those pieces together is released as heat. This process is called nuclear fission. If this happens enough, the heat released can boil a huge amount of water to ultimately generate power.

This is an incredibly useful natural process. The question is, how do we harness it to create electricity?

There are two main reactors used to generate electricity worldwide, both of which run on low enriched uranium fuel pellets. They were first developed in the 1950’s and fall under the “light water reactor” umbrella. Over 19% of the United States total electricity demand is satisfied with only 97 reactors. A large pressurized water reactor can have 18 million fuel pellets packed into rods arranged in fuel assemblies.1 The equivalent energy from 3.6 million pellets is consumed every year. One year of operation from a large pressurized water reactor will save us from burning 3.6 million tons of coal or 12.6 million barrels of oil. 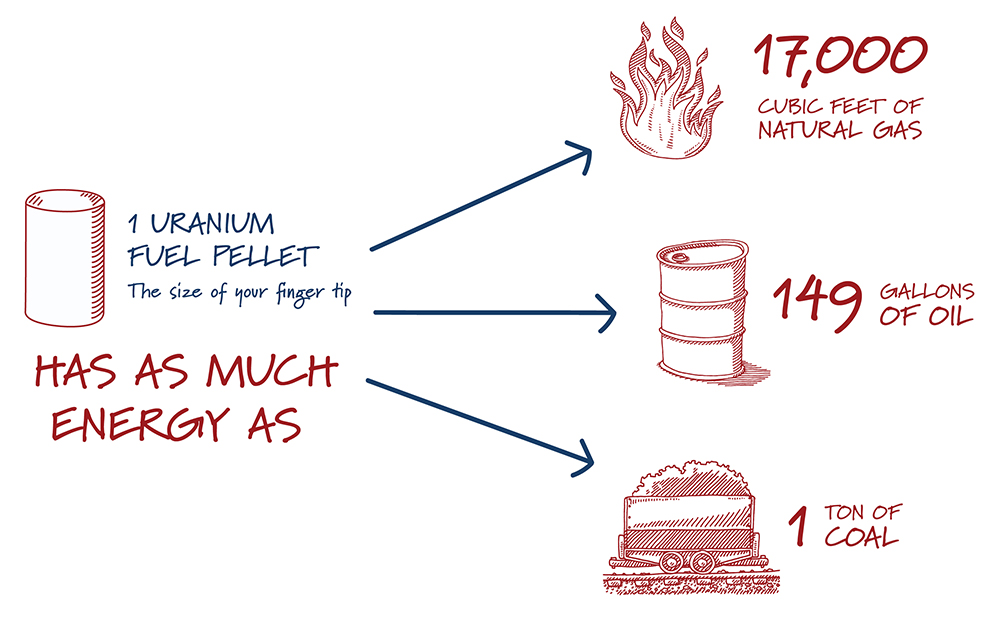 Uranium ore3 (U3O8) is found worldwide and is mined in over a dozen different countries, including the United States4, using surface mining or extracted using leach mining. Surface mining is what comes to mind when imagining rock quarries. Leach mining is the preferred method of environmentalists; a solution is passed through the uranium deposit which extracts the ore without disturbing the topsoil5. Worldwide, these two mining methods are used with equal popularity.6 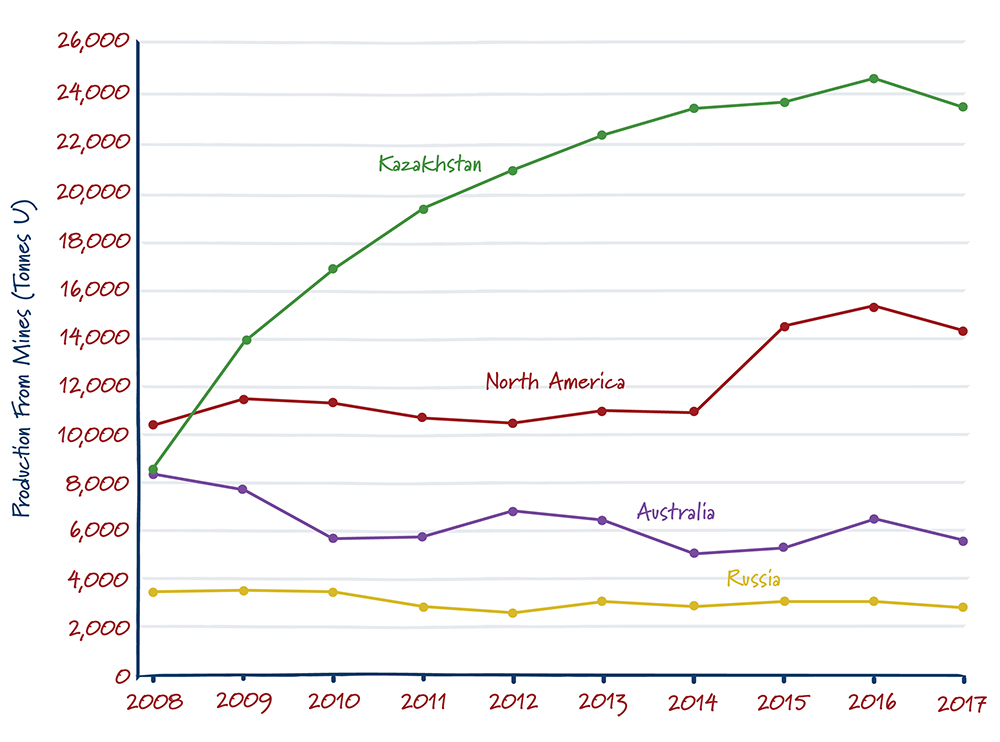 After extraction, the ore is soaked in an acid solution that releases the uranium oxide (U3O8) from the soil. The released uranium oxide is dried and formed into a pressed powder, colloquially called “yellowcake” for its color. Yellowcake has a composition of 80-90% pure uranium oxide.8 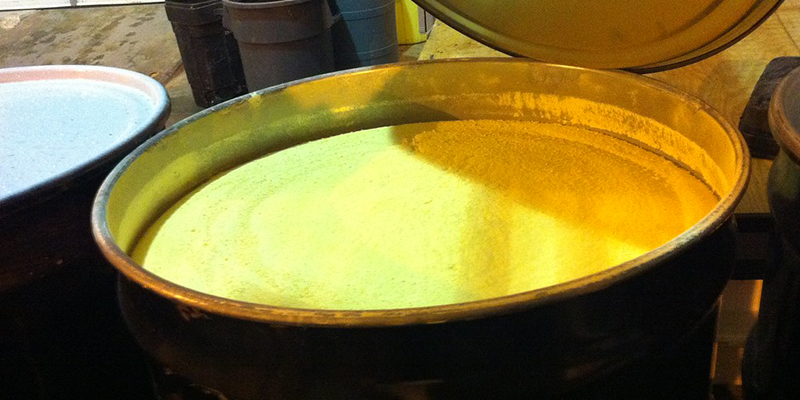 The uranium atom in the unrefined ore (U3O8) has a probability of being one of three types of “isotopes”.10,11 These isotopes occur in a natural abundance ratio: 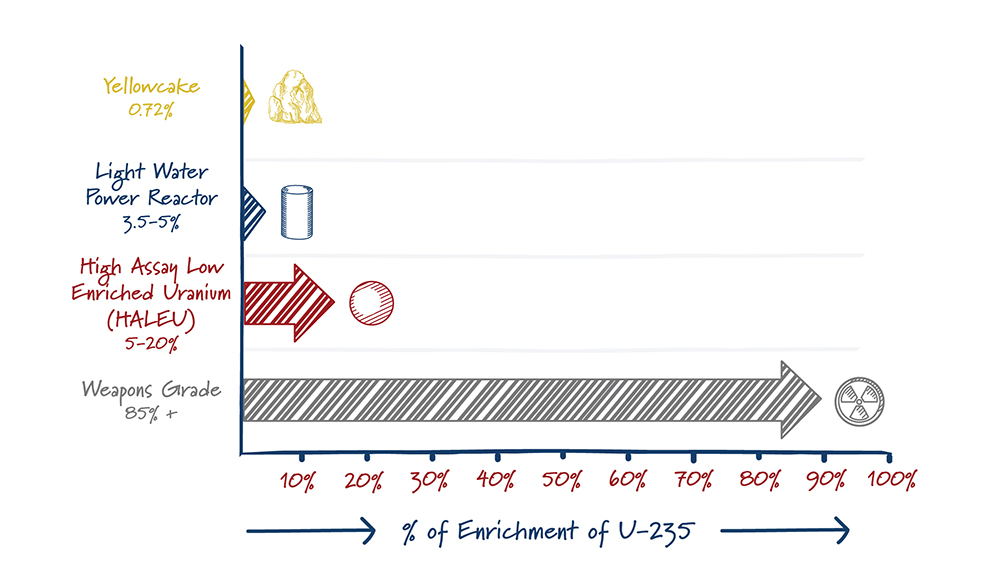 Several enrichment techniques exist, but the most widely used is the gas centrifuge. The yellowcake (U3O8) is turned into uranium gas (UF6). Higher concentrations can be reached by spinning the gas in a centrifuge. When the gas is spun the heavier gas (238UF6) moves to the outside and the lighter gas (235UF6) moves towards the center. Centrifuges are linked in a chain, and the gas with the higher concentration of 235UF6 is fed into a new centrifuge to continue enrichment until the desired concentration is reached.13

After enrichment, the uranium gas (UF6) is turned into uranium dioxide (UO2) powder. This powder is shaped and heated into a ceramic pellet that is approximately ⅜ inches in diameter and ⅜ inches tall.14 Ceramic is a good choice for the fuel pellet material, because ceramic can get very hot before it melts, it does not expand very much as it gets hot, and it quarantines radioactive contaminants.

Manufacture of a Fuel Assembly 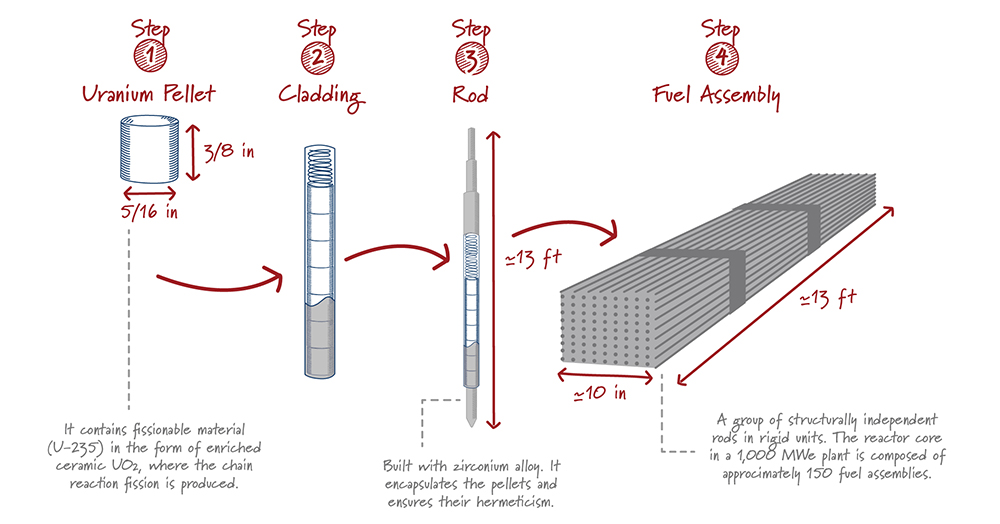 These pellets (UO2) are stacked into rods 13 feet long. The rod is pressurized16 with inert helium gas (He) and sealed. The rods are bundled into a fuel assembly with a top handle so it can be inserted and removed by a crane. There are approximately 150 bundles in a reactor core depending on the arrangement and age of the fuel. One bundle, on average, has a useful life of 5 years. About a third of the bundles are replaced every 18 to 24 months.

Although fuel manufacturing is complicated, the relative energy production makes nuclear fuel a small percentage of total plant cost compared to other electricity sources. Fuel costs are a third of the cost of a nuclear power plant over its entire lifetime17 and more than double that for coal and natural gas plants.18

Current Alternatives and Looking to the Future

The next generation of nuclear reactor designs incorporate inherent safeguards while reducing costs. Smaller, modular designs decrease plant build costs and allow the power plant to be scaled to the population’s needs. Some new reactors can use the energy from spent fuel and diluted nuclear weapons, reducing proliferation risks and decreasing the amount of nuclear waste by up to 80%. Some reactors are designed to shut down naturally in the event of total loss of power. All these improvements demand innovation in variations in fuel enrichment, fissionable isotope used (i.e. U – 235, U – 233, Pu – 239), and physical composition. For example, the low enriched uranium (LEU) for light water reactors is 3-5% enriched uranium in ceramic form. Alternative fuel designs currently exist in other countries and others are being developed for the next generation of reactors.

High-Assay Low-Enriched Uranium (HALEU) is an enrichment class greater than low enriched uranium but still significantly below weapons grade enrichment. HALEU ranges between 5-19.75% enrichment of U – 235.19 This higher fuel enrichment class is important for the future of advanced reactors because it allows for a reduction in core size and, consequently, power plant cost.

Tri-structural isotropic (TRISO) fuel is an innovation in physical composition that makes the fuel immune to meltdown. This fuel is being built by a company called X-energy20 for their high temperature gas cooled reactor. A ball of metal HALEU, the size of a pen tip21, is coated in carbon and silicon carbide. Lots of these coated balls are put into a billiard-ball sized sphere of lead. High temperature reactors operate between 1350 and 1750 °F. This coated fuel can handle up to 3250 °F, a temperature that exceeds worst-case conditions.22 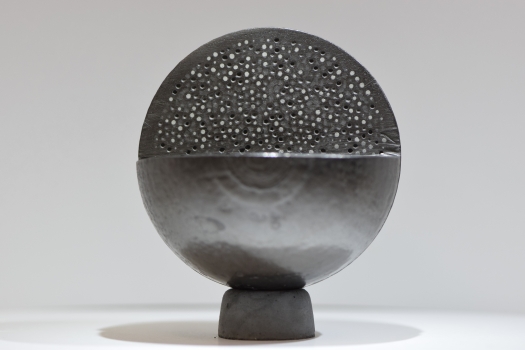 Mixed oxide fuel (MOX)24 is the second life of LEU from light water reactors. Programs that take advantage of MOX fuel exist in Europe, Russia and Japan. After the enrichment process of low enriched uranium for light water reactors, depleted U – 235 (about 0.2% enriched) remains. Plutonium in spent fuel25 can be removed and combined with depleted U – 235. A 7% enrichment of plutonium behaves similarly to a 3-5% enrichment of U – 235 in a reactor. MOX fuel assemblies can be used in special light water reactors next to LEU fuel assemblies. Taking advantage of MOX leads to having a smaller volume of nuclear waste. Ideally, this second life would be given to all LEU spent fuel.

Natural uranium fuel pellets (uranium at its natural concentration) have a reduced proliferation risk. If a country doesn’t have enrichment capabilities, weapons grade cannot be reached. The reactors that use natural uranium are also able to extract energy from the spent nuclear fuel from light water reactors, reducing overall waste volume. Two schools of reactors can take advantage of natural uranium: heavy water26 reactors and plutonium(Pu) – 239 fast breeder27 reactors. The most famous heavy water reactor is the Canadian CANDU reactor which went online in 1977.28 Pu – 239 fast breeder29 reactors can be broken down further into liquid sodium30, gas cooled31, and traveling wave32 reactors. These are less common today, but dominate the field of advanced reactors because they create 1/5th of the waste of today’s light water reactors.

Liquid fuel is a very particular case; the fuel atoms are bound to a portion of the molecules in the working fluid. A great example of this are molten salt reactors;33 fluoride salts are combined together in a careful ratio acting as both the coolant and the fuel. These reactors were originally researched in the 1960’s. Since then, there are a few advanced reactor designs34,35 that use the liquid fuel concept.

The diversity in nuclear fuel makes it hard to fully understand. Physical composition, enrichment, and fissionable isotope create many combinations of fuel types that could service remote communities or massive metropolitan centers. Nuclear batteries power our space missions and nuclear reactors power our submarines, but the individual technology taking advantage of that fissioning isotope looks drastically different. Asking everyone to have an understanding of nuclear fuel is unnecessary, but it is important that people understand the magnitude of its potential. Completely carbon free, nuclear energy powers nearly 20% of U.S. electricity consumption using variations of the same fuel developed in the 1940’s. 80 years later, new advanced reactor designs are gaining momentum and we could see them in the marketplace this decade. The fuels in development for these new designs have the capacity to recycle spent fuel, reduce proliferation risk, or to prevent the reactor from melting down. While the science behind nuclear power is exciting, its carbon free, reliable contribution to our power grid is even more so.